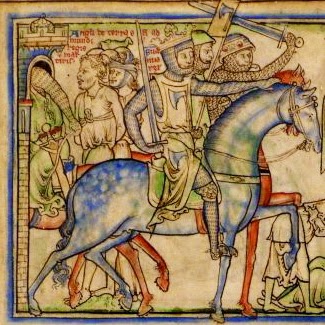 2013-2016 sees the 1000th anniversary of the Danish Conquest of England by Svein Forkbeard and his son Cnut, which resulted in nearly three decades of Danish rule. This conquest and later narratives about it are the subject of my current research, so I've been writing a series of posts to mark the anniversary, which can be found at the following links:

Part 1: an introduction to the series, including some thoughts on why the Danish Conquest is so often overshadowed by the Norman Conquest of 1066

Part 2: the arrival of Svein Forkbeard in the summer of 1013, and his negotiations with the leaders of the north of England

Part 3: after Svein's army overrun the south of England, King Æthelred escapes to Normandy and Svein is accepted as king of England at Christmas 1013

Part 4: the sudden death of Svein on February 3 1014, and later legends about it

Part 5: the English witan make arrangements for Æthelred's return, on the condition that he promises to be a better king than before; plus, a possible context for Wulfstan's Sermo Lupi

Part 8: in the summer of 1015, Cnut invades England, Æthelred is ill, and Wessex submits to the Danes

Part 11: the Battle of Sherston, fought in Wiltshire just after Midsummer in 1016

Part 12: fighting in London and Kent over the course of the summer

Part 13: the Battle of Assandun on 18 October 1016, the last battle between Cnut and Edmund Ironside

A few other posts relating to the Danish Conquest and the Danes in England:

The Battle of Maldon
The Story of Cnut and the Waves
The Battle of Assandun: Three Sources
A Visit to Assandun (maybe)
Æthelnoth 'the Good', Cnut's Archbishop
St Olaf in England