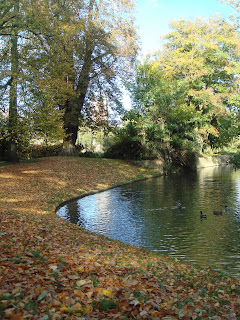 My last post was in February, and now it's October, and Oxford looks like this. Charles in 'Brideshead Revisited' says (in melancholy mood) that it's typical of Oxford to start the new year in the autumn, and he's quite right. After Trinity term, with its sunny frivolity and fun, messing around on punts and in parks, you get down to the serious work again when the leaves are falling - the leaves of books and of trees being perhaps just too neatly linked to avoid comparison. I suppose we'll work our way round to Trinity again, as we always do, but for the moment study begins (well, begun - it is second week now, after all) surrounded by external reminders of the transience of all earthly things.

Nothing more appropriate than some Hopkins:

With your fresh thoughts care for, can you?

It will come to such sights colder

By and by, nor spare a sigh

And yet you wíll weep and know why.

Now no matter, child, the name:

Nor mouth had, no nor mind, expressed

What heart heard of, ghost guessed:

It ís the blight man was born for,

It is Margaret you mourn for.