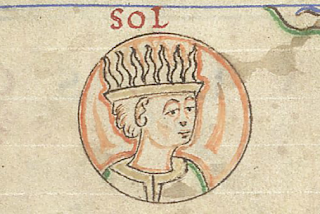 The sun in an Anglo-Saxon manuscript (BL Arundel 60, f.12v)
This is the Old English version of the Advent antiphon 'O Oriens', addressed to Christ the Dayspring, the rising sun. For background on the Old English poems based on the O Antiphons, see this post.

O Dayspring, splendour of light eternal and sun of righteousness:
come and enlighten those who dwell in darkness and the shadow of death.


O Earendel, brightest of angels,
sent to mankind over middle-earth,
and righteous radiance of the sun,
splendid above all stars, of thine own self
thou ever enlightenest every age.
As thou, God born of God long ago,
Son of the true Father, eternally existed
without beginning in the glory of heaven,
so thine own creation cry with confidence
to thee now for their needs, that thou send
that bright sun to us, and come thyself
to lighten those who long have lived,
surrounded by shadows and darkness, here
in everlasting night; who, shrouded by sins,
have had to endure death's dark shadow.

Now, hope-filled, we look for healing,
brought to the world's people through the word of God,
who was in the beginning with the almighty Father
equally eternal with God, and now became
flesh, free of failings, born of the virgin,
a support to the sorrowful. God was with us,
seen without sin; together dwelt
the mighty Measurer's child and the son of man,
at peace among the people. We may ever address
our thanks to the Lord of victory for his deeds,
because he chose to send himself to us.

The antiphon 'O Oriens' falls on the winter solstice, the turning-point of the year. In the antiphon and in this poem, Christ is figured as the dawn and the returning sun, appearing in the time of greatest darkness, in the depth of the season the Anglo-Saxons called midwinter. In his De temporum ratione, Bede explains the traditional understanding of the relationship between the church year and the equinoxes and solstices:

Bede himself thought the solstice should be more accurately dated a few days earlier than this, on 21 December, but he doesn't dispute the central point of the symbolism. It probably would not have occurred to him to do so: to a medieval scientist, the structure of the year reflected deep essential truths about the structure of the universe, ordained by God. That included every detail of the calendar: the four seasons, the twelve months, the equinoxes, solstices, and more. (Two of the most popular, though unhistorical, opinions about the solstice often expressed today - that the church 'stole' the solstice from the pagans, and therefore has no right to celebrate it, or that celebrating the solstice is something only pagans would do, and therefore unchristian - were both foreign to medieval science.) The birth of Christ is celebrated in midwinter, when light is lowest, because he is the rising sun, oriens.

And so, as you might expect, the Old English version of 'O Oriens' (which you can hear read aloud here) glows with words relating to light: beorht 'bright'; leoma 'a ray of light'; torht 'bright'; inlihten 'to enlighten'. The opposite is þrosm and þeostre 'shadows' and 'darkness', sinneaht 'perpetual night', and deorc deaþes sceadu 'death's dark shadow'. Christ is the sun in two senses, of course: he is both soðfæsta sunnan leoma 'radiance of the true sun' and sunu soþan fæder 'son of the true Father'. The poem gives us words for 'sun' (sunne) and 'stars' (tunglas) but the opening address seems to be to the name of a star: Earendel, paralleled in other Germanic languages as a star-name, and here apparently the Morning Star.

Tolkien came across this poem as an undergraduate at Oxford, around 1914, and it gave him the name 'Eärendil' which he was to use in his own mythology. Later in his life he wrote (through a fictional persona) of how encountering the first few lines of this poem produced "a curious thrill, as if something had stirred in me, half wakened from sleep. There was something very remote and strange and beautiful behind those words." He called these lines "rapturous words from which ultimately sprang the whole of my mythology", and explained his understanding of the name's appearance in this poem:

I was struck by the great beauty of this word (or name), entirely coherent with the normal style of A[nglo]-S[axon], but euphonic to a peculiar degree in that pleasing but not 'delectable' language. Also its form strongly suggests that it is in origin a proper name and not a common noun. This is borne out by the obviously related forms in other Germanic languages; from which amid the confusions and debasements of late traditions it at least seems certain that it belonged to astronomical-myth, and was the name of a star or star-group. To my mind the A-S uses seem plainly to indicate that it was a star presaging the dawn (at any rate in the English tradition): that is what we now call Venus: the morning-star as it may be seen rising brilliantly in the dawn, before the actual rising of the Sun. That is at any rate how I took it. Before 1914 I wrote a 'poem' upon Earendel who launched his ship like a bright spark from the havens of the Sun. I adopted him into my mythology - in which he became a prime figure as a mariner, and eventually as a herald star, and a sign of hope to men.

Tolkien's Eärendil became a herald, more akin to John the Baptist (light of the summer solstice) than to Christ (light of the winter solstice), although Christ is clearly the subject of the Old English poem. In The Lord of the Rings, when Sam and Frodo are trapped in the darkness of Shelob's lair, it is the light of Eärendil which comes to their aid:

[A]s he stood, darkness about him and a blackness of despair and anger in his heart, it seemed to him that he saw a light: a light in his mind, almost unbearably bright at first, as a sun-ray to the eyes of one long hidden in a windowless pit... 'Master, master!' cried Sam, and the life and urgency came back into his voice. 'The Lady's gift! The star-glass! A light to you in dark places, she said it was to be. The star-glass!'

'The star-glass?' muttered Frodo, as one answering out of sleep, hardly comprehending. 'Why yes! Why had I forgotten it? A light when all other lights go out! And now indeed light alone can help us.'

Slowly his hand went to his bosom, and slowly he held aloft the Phial of Galadriel. For a moment it glimmered, faint as a rising star struggling in heavy earthward mists, and then as its power waxed, and hope grew in Frodo's mind, it began to burn, and kindled to a silver flame, a minute heart of dazzling light, as though Eärendil had himself come down from the high sunset paths with the last Silmaril upon his brow. The darkness receded from it until it seemed to shine in the centre of a globe of airy crystal, and the hand that held it sparkled with white fire.

Frodo gazed in wonder at this marvellous gift that he had so long carried, not guessing its full worth and potency. Seldom had he remembered it on the road, until they came to Morgul Vale, and never had he used it for fear of its revealing light. Aiya Eärendil Elenion Ancalima! he cried, and knew not what he had spoken; for it seemed that another voice spoke through his, clear, untroubled by the foul air of the pit.

Aiya Eärendil Elenion Ancalima means 'Hail Earendil, brightest of stars', and is, as Tolkien later put it, "derived at long remove" from the line of the Old English poem: Eala earendel, engla beorhtast. 'Another voice spoke through his' - the voice of an Anglo-Saxon poet. 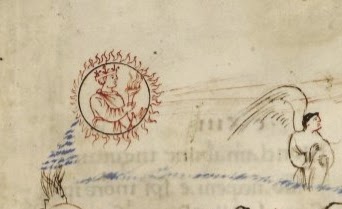 In the footnote to the passage from Tolkien's "Drafts for a letter to 'Mr. Rang'" of "Aug. 1967" from which you so aptly quote(Letters, Letter 297, p. 385), he refers to the Blickling Homilies, giving "163" which is in fact the relevant page number in Richard Morris's 1880 EETS edition (where a facing translation appears on p. 162), now available at the Internet Archive, as are both Israel Gollancz's Cynewulf's Christ: An Eighth Century English Epic (1892) - which includes a facing verse translation, and the first (1900) and second (1909) impressions of Albert S. Cook's The Christ of Cynewulf, both of which books were presumably know to him (compare his discussion with both of theirs!). Edward Burgert's dissertation, The Dependence of Part I of Cynewulf's Christ upon the Antiphonary (1921), which Tolkien could have known, and which continues the general discussion interestingly in any case, is also at the Internet Archive.

Thanks for those references.

Thank you for this.

It may be worth noting that Tolkien was very intentional about his use of 'symbolic' dates. The Fellowship leaves Rivendell on December 25, beginning the Quest; and on March 25 the Ring is destroyed, completing it.

[Likewise the Council of Elrond takes place on October 25 and Aragorn finds the sapling of the White Tree on June 25.]

Bearing in mind that the Crist reference to Earendel is usually considered Tolkien's jumping off point in terms of creating stories of his own, it is striking to see this relationship with the solstices and equinoxes (or the traditional dates for them, at least) running all the way through his work.

Yes, that's a great point - thanks!

What a beautiful poem! Thank you very much for sharing it.

(from another Old Mertonian)