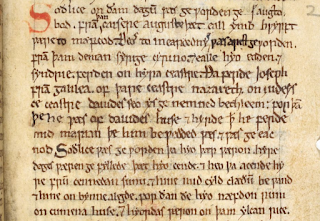 A little while ago I recorded readings of several passages from an Old English translation of the Gospels, and I thought today I might post the three short extracts which relate to Christmas. This translation dates from the end of the tenth century, the version known as the West Saxon Gospels. It's always a rewarding experience to read familiar texts in an unfamiliar language, so I hope you find these interesting - though the recordings aren't perfect, so please be forgiving of any mistakes!

First, the opening of the Gospel of John:

There was a man sent from God, whose name was John. He came as a witness, to bear witness to the light, that all men through him might believe. He was not the light, but he bore witness to the light. That was the true light, which lightens every man who comes into the world. He was in the world, and the world was made by him, and the world did not know him. To his own he came, and they did not receive him. Truly, as many as received him, to them he gave power to become the sons of God, to those who believe in his name; who were born, not of blood, nor of the will of the flesh, nor of the will of man, but were born of God. And the Word was made flesh, and dwelt among us, and we beheld his glory, glory as of the only begotten of the Father, full of grace and truth.

Truly it came to pass in those days that there went out a decree from Caesar Augustus that all the world should be taxed. This tax was first made when Cyrenius was governor of Syria. And all went out, and each travelled to his own city. Then Joseph went from Galilee, out of the city of Nazareth, into Judaea, to the city of David, which is called Bethlehem, because he was of the house and lineage of David, to be taxed with Mary, who was betrothed to him and was pregnant. Truly it happened that while they were there, her days were fulfilled that she should give birth. And she brought forth her firstborn son, and wrapped him in swaddling clothes, and laid him in a manger, because there was no room for them in the inn.


And there were shepherds in the same country, awake, and keeping night-watch over their flocks. Then the angel of the Lord stood before them, and the brightness of God shone around them: and they were greatly afraid. And the angel said to them, Do not be afraid. Truly, I now bring you tidings of great joy, which shall be to all people. For to you is born this day a Saviour, who is Christ the Lord, in the city of David. And this shall be a sign to you: you shall find a child wrapped in swaddling clothes, and laid in a manger. And suddenly there was with the angel a multitude of the heavenly host praising God, and thus saying, Glory to God in the highest, and on earth peace to men of good will. And it came to pass, when the angels had gone away into heaven, the shepherds spoke to one another and said, Let us go to Bethlehem, and see this thing which is come to pass, which the Lord has made known to us. And they came with haste, and found Mary, and Joseph, and the child lying in a manger. And when they had seen that, they understood the words which had been spoken to them about this child. And all those who heard it wondered at the things which the shepherds told them. Mary kept all these words in her heart, thinking about them. Then the shepherds returned home, glorifying and praising God for all the things that they had heard and seen, as it was said to them.
Posted by Clerk of Oxford at 10:58 am

This is simply wonderful. Thank you.

Thank you so much. That was a wonderful Christmas gift.