A Medieval Love Poem: The Heart That Loveth Me

Today I stumbled across a medieval love poem which may, I think, be the most straightforwardly likeable and accessible poem I've ever encountered in that genre. Lots of people find this blog searching for medieval love poems (for practical use, I like to imagine) - so I present this as a gift to you, the Internet.

For weal or woe I will not flee
To love that heart that loveth me.

For one the like unto that heart
Never was, nor is, nor never shall be,
Nor never like cause set this apart
To love that heart that loveth me.

Which cause giveth cause to me and mine
To serve that heart of sovereignty,
And still to sing this latter line:
To love that heart that loveth me.

Whatever I say, whatever I sing,
Whatever I do, that heart shall see
That I shall serve with heart loving
That loving heart that loveth me.

This knot thus knit, who shall untwine,
Since we that knit it do agree
To loose not nor slip, but both incline
To love that heart that loveth me?

Farewell, of hearts that heart most fine,
Farewell, dear heart, heartly to thee,
And keep this heart of mine for thine
As heart for heart, for loving me.

This is a modernised form of a text which survives in one manuscript of c.1500 (Canterbury, Canterbury Cathedral Library CCA-DCc-ChCh Letterbook II, 174) and is edited as follows by Richard Greene in The Early English Carols (Oxford, 1977), p. 271:

For [wele or w]oo I wyll not fle
To love that hart that lovyth me.

That hart my hart hath in suche grace
That of too hartes one hart make we;
That hart hath brought my hart in case
To loue that hart that lovyth me.

For one the lyke vnto that hart
Never was nor ys nor never shall be,
Nor never lyke cavse set this apart
To love that hart that lovyth me.

Whyche cause gyveth cause to me and myne
To serve that hart of suferente,
And styll to syng this later lyne:
To love that hart [that lovyth me.]

Whatever I say, whatever I syng,
Whatever I do, that hart shall se
That I shall serue with hart lovyng
That lovynge hart [that lovyth me.]

Farwell, of hartes that hart most fyne,
Farwell, dere hart, hartly to the,
And kepe this hart of myne for thyne
As hart for hart for lovyng me.

When I first read this poem and was doing some preliminary Internet-based research (i.e. googling it to see if anyone else had blogged about it), I found it didn't come up anywhere except, bizarrely, on Yahoo Answers, where someone had posted it - spelling modernised - to ask 'What do you think of this poem?' Yahoo Answers wasn't keen:

To be brutally honest, this sounds like something I could have written in the sixth grade. The rhyming scheme is awkward, as is the the way in which the line "To love that heart that loveth me" is repeated. The old (middle?) English verbs like "loveth" and "giveth" just sound weird in this poem.


Fair enough, Yahoo Answers, and thanks for your opinion (the grade of 6/10 seems a bit harsh, though). But there's much to like about this poem, weird Middle English verbs notwithstanding. Although in most respects a very simple poem - almost certainly the text of a song, although the music doesn't survive - it repays a little attention. For instance, I like how it makes you work to keep up with it, especially in the first verse: each time you hear the word heart you're trying to be alert to which heart is being talked about - otherwise you can't parse the sense of it at all - but at the same time the poem is working against your desire to do that, to unriddle the riddle, because it's trying to get you to accept that since the hearts are one, you can't distinguish them. It wants you to stop trying to keep up - but you can't, because then the poem becomes nonsense. It's mind-bending fun! (It's a bit like the experience of reading 'Earth upon earth', a poem with a very different tone but using much the same device.)

I like how as a result the poem becomes more and more of a tongue-twister as it goes on, until you can almost imagine the singer collapsing at the end from sheer exhaustion - if nothing else, just from the effort of getting through the phrase 'this knot thus knit'. (Say that five times fast.) I like the self-referential wink at the carol form in the third verse: because of love, the singer says, s/he has reason "still to sing this latter line: [second line of the refrain]". I like the metaphor of the knot, which is employed in various interesting ways in Middle English for 'things tightly knit together': a knot can be an intellectual puzzle, an agreement between two parties, a newly-conceived child, a close-packed group of people, the mysterious bond of the Holy Trinity, and, here, two hearts in one. (And other things too: the MED entry for knot makes interesting reading.) I like the clever use of untwine, which primarily continues the knot metaphor and means 'unwind' (so, the knot the lovers have made together can't be undone) but also suggests the similar verb untwinnen which means 'to separate, to part two things'. I like how the poem waits until the last verse to employ the obvious-yet-obligatory pun on heart and heartly: 'Farwell, dere hart, hartly to thee' (hartly means something like 'with all my heart'). And I like the term of endearment 'dear heart', one of my favourites in that category, and a nice use of a conventional and common phrase within a poem which pushes that same convention (heart as metonym) to its absolute limits.

What's not to like about this poem? This love is mutual and reciprocal - that's the whole point of the poem - and there are no tiresome protestations of misery or unworthiness, etc., etc. There's no way to tell the gender of the singer or the beloved; the only words used to describe the person addressed (suferente, fyne) are gender-neutral, as far as I can see. Two happy, equal lovers, with one heart. What could be better? 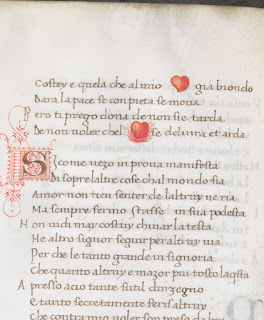 Speaking hearts
Posted by Clerk of Oxford at 10:48 pm

Beautiful poem! Thank you for posting.

Upon first reading it I assumed (without reason) that the speaker was male (and the style reminded me of John Donne), but just like you, found the lack of typical male overtones and mentions of various hierarchies to be quite refreshing. I really liked your point on the neutrality of the language - it helped me reread it very differently.

Beautiful poem. Thanks for sharing it with us.

Thank you both for commenting and sharing my enjoyment of this poem!

3 years late but do you know who the author is of this lovely poem?