St Oda the Good: Son of a Viking, Forger of Broken Swords

Today is the feast of St Oda, Archbishop of Canterbury, who died on 2 June 958. Oda has perhaps the most exciting family background of any Anglo-Saxon churchman (possibly of any archbishop of Canterbury ever): Oda's father was a Danish Viking, who came to England in c.865 as part of the so-called 'Great Heathen Army' led by Ivar the Boneless and Ubbe, the men whom medieval legend called the sons of Ragnar Lothbrok. This Viking army raided and conquered large parts of England in a series of devastating campaigns, until eventually making peace and settling down in the north and east of England, in the area which later became known as the Danelaw. Oda's father seems to have settled in East Anglia.

Now, the name 'Great Heathen Army' may have alerted you to the fact that these Vikings were not Christians - but Oda became a Christian (his hagiographers say he did this in childhood, in the face of his father's fierce opposition, supposedly), entered the church, became a royal adviser, and in 941 was appointed Archbishop of Canterbury. A meteoric rise for the son of a pagan Viking! As Archbishop of Canterbury, Oda seems to have made a special effort to support the church in his native East Anglia, perhaps to repair some of the damage his ancestors had done there. Other members of his family also became prominent churchmen, most notably his nephew, the great monastic reformer St Oswald of Worcester.

Although we have various contemporary sources for Oda's career, the first stand-alone Life of Oda wasn't written until after the Norman Conquest; it was composed at Canterbury shortly before 1100 by the monk and historian Eadmer, as part of his effort to rescue various Anglo-Saxon archbishops from obscurity. He based his Life largely on the work of Byrhtferth, writing a century earlier at Ramsey Abbey, which had been founded by Oda's nephew St Oswald. Here's a very nice-looking manuscript of Eadmer's Life (BL Harley 624, f.121), produced at Canterbury during the author's lifetime: 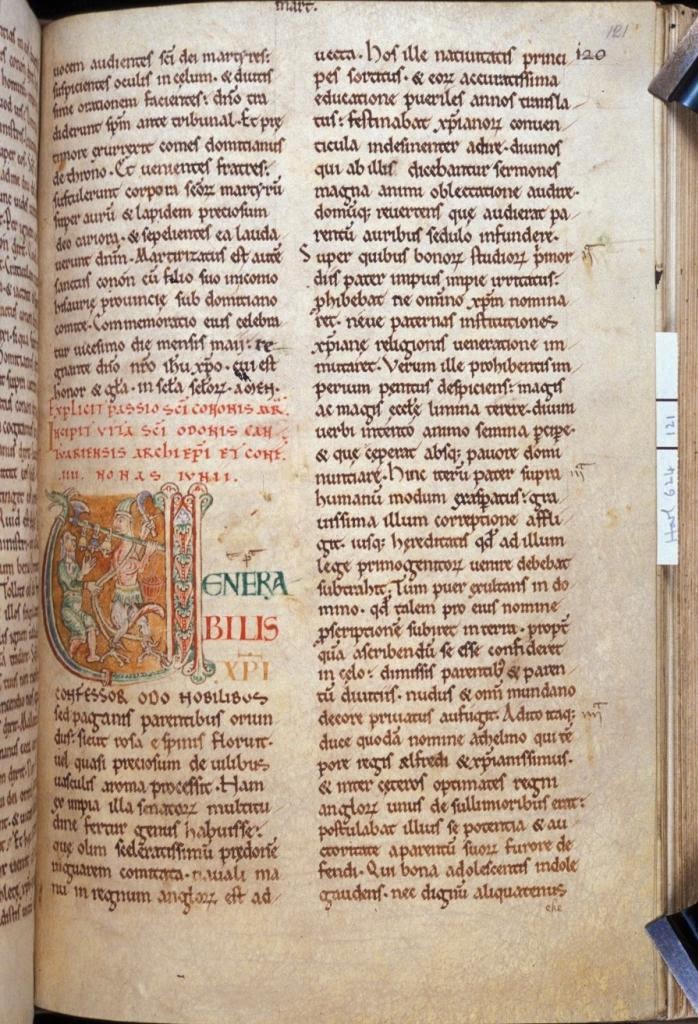 If we look closer, you can read the beginning of Eadmer's Life for yourself: 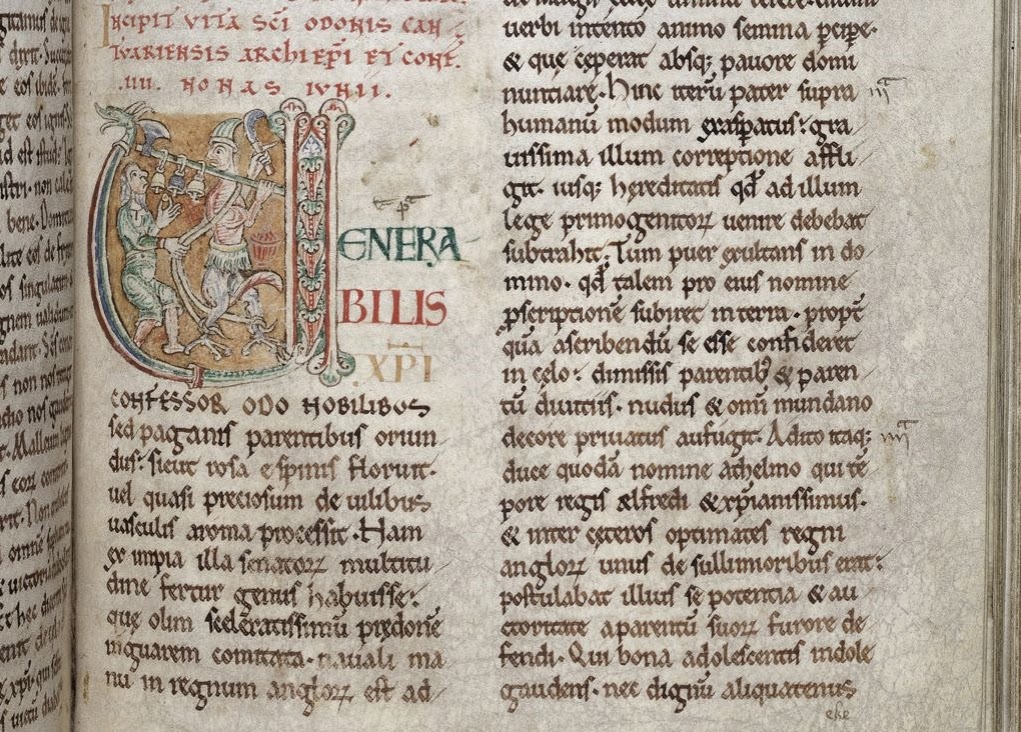 The venerable confessor of Christ, Oda, who was descended from noble though pagan parents, flourished like a rose among thorns, or, to put it another way, issued forth like a priceless perfume from a worthless vessel. For he is said to have taken his lineage from that horde of godless nobility who were transported long ago in the company of Ivar, a most wicked plunderer, to the kingdom of the English by a naval force.

(I wouldn't call the sons of Ragnar a 'horde of godless nobility' to their faces, Eadmer...)

Following Byrhtferth, Eadmer describes how Oda converted to Christianity in his youth and "wore down the threshold of the church by his frequent visits", much to the horror of his father, who forbade him from consorting with Christians and then, when Oda persisted, stripped him of his inheritance. Oda ran away from home and sought the protection of an English nobleman named Æthelhelm, who arranged for him to be educated (in Latin and Greek, "which were at that time widely used among the race of the English", claims Eadmer, determined to make you think the best of tenth-century England). Oda was baptised and in time became a priest. His connection with Æthelhelm brought him into contact with the royal court, where he was noted for his devotion to his patron and his holiness of life, and King Æthelstan came to depend on him.

And then comes a rather wonderful miracle, which supposedly took place when Oda was at Æthelstan's side in the Battle of Brunanburh:

The king had brought blessed Oda into battle with him, trusting that he would defeat the enemy much more by the merits of this man than with hordes of soldiers. And while the most bitter and wretched slaughter was happening all about, a lamentable event occurred. For while King Æthelstan was fighting, his sword shattered close to the hilt and exposed him to his enemies, as if he were defenceless. Meanwhile Oda stood somewhat removed from the fighting, praying to Christ with his lips and in his heart for the safety of the Christian army, and for the sake of this continually raised his face, hands and eyes to those in heaven.

The king was perplexed about what to do in such a situation, for he thought it unspeakable to take a weapon from one of his men in order to arm himself. When a group of his adversaries noticed that the king had a broken sword and was unarmed, though they had begun to flee they turned their faces back to battle and set about obtaining revenge for their shameful flight by killing him most cruelly. Then all at once the air resounded with the clamour of the multitude crying out both for God to offer assistance and for venerable Oda to come forth as quickly as possible.

He raced up to the king and, although weary, asked what it was he wanted him to do. He listened to the king and immediately responded with these words: "What is the problem? What is worrying you? Your blade hangs intact at your side and yet you complain that it is broken. Come to your senses, extend your hand to the sheath, draw the sword and, behold, the right hand of the Lord shall be with you. And be not afraid, since the sun will not set until either flight or destruction envelops the enemies of your Lord who have risen up against you."

At these words all those who were listening were struck with great amazement, and casting their glance towards the king they saw hanging by his side the sword, which had not been there when they had looked earlier. Snatching it and taking comfort in the Lord, the king advanced and maimed or put to flight or dealt death to all the men rushing upon him from both his left and right. And so in accordance with the prediction of the servant of God, it came to pass that the king gained victory over his enemies exactly as the sun was setting.

A pretty awesome miracle, I think you'll agree. It's particularly fitting that a Viking's converted son should intervene to help Æthelstan win this great battle, which was a victory over combined Norse, Irish and Scottish armies. After this dramatic reforging of the blade that was broken, Oda's reputation grew, until he was made Archbishop of Canterbury. He led the church, rebuked wicked kings, promoted the future St Dunstan, and "each day like a gift of rain watered the people entrusted to him with heavenly teaching as if they were fertile crops".


And thus Oda, the most brilliant star in the city of Canterbury, was snatched from this world, and with angels rejoicing he sought a seat in that most glorious celestial city, where he rejoices in eternal exultation and in the delight of ineffable sweetness contemplates the face of Christ, secure now in his reward and caring still about the welfare of his children. He died in the presence of all the sons of Christ Church, after promising them as they wept that the Lord would provide a good shepherd for them after his death.

Oda was buried in Canterbury Cathedral; there's a tiny marginal drawing of his tomb in a manuscript of Osbern's Life of Dunstan (BL Harley 56, f.14v): 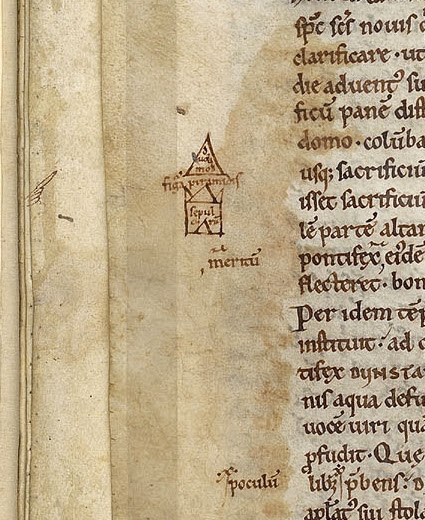 After two short-lived and ill-favoured successors, Oda's dying promise was fulfilled when Dunstan became Archbishop of Canterbury. Dunstan was devoted to Oda:


One particular event among others concerning Dunstan and father Oda, with whom we are dealing, is a strong indication for understanding the sanctity and blessedness of those men; for when on the holy day of Pentecost Dunstan was celebrating the mass before the altar of the Lord and Saviour at Canterbury, the Holy Spirit, who had appeared above him in the shape of a dove, turned away towards the southern side of the altar after the sacrifice had been consumed, to where venerable Oda lay buried, and rested above his tomb with many people looking on. Dunstan himself viewed this event with such great awe that thereafter he never used to pass in front of the grave of Oda without genuflecting. Moreover, from that time onwards he used to refer to him by the epithet 'the Good' in his mother tongue, namely Oda se gode, which means 'Oda the Good'. And even today the English, and especially the citizens of Canterbury, still refer to him by this name.

(It's worth noting that in Old English Oda and gode rhyme, so this is a natural and memorable epithet.) Spare a thought for Oda today; the recommendation of St Dunstan should be good enough for anyone!
Posted by Clerk of Oxford at 1:21 pm

Thanks very much for this! I wasn't aware of Oda previously. I've been thinking a lot about Viking Christian identity in Anglo-Saxon England recently. Asser's categorisation of English as 'Christiani' and Vikings as 'pagani' comes to mind - obviously after their conversion, people like Guthram and Oda ceased to be the latter, even though they continued to be 'not English', so I was wondering about that says about their identity. In the 11th century, would the descendants of these earlier converted Scandinavians have seen themselves as 'Danes' (i.e. having more in common with the raiders and invaders), or would they have identified themselves as 'Angli' or simply 'Christiani'? Also interesting to see a clearly very 'genuine' conversion in the first generation of Anglo-Scandinavians (one does always wonder about old Guthrum!)

That's a fascinating question! It's difficult to say how Oda and his family would have seen themselves, but their Danish connections may well explain their activity in East Anglia and in York (Oda's nephew Oswald and his relative Oskytel were both archbishops of York), as if they felt or were perceived to have a particular affinity with areas of Scandinavian settlement.

What I find especially interesting, though, is that the details of Oda's Danish ancestry, including the link between his father and Ivar's army, are first recorded at the end of the tenth century. That detail first appears in Byrhtferth's Life of Oswald, written at Ramsey, and coincides with a renewed interest at Ramsey in the cult of St Edmund (Ivar's most famous victim), which flourished with the encouragement of Oda's proteges Oswald and Dunstan. There seems to have been a particular interest in exploring what happened after the first wave of Scandinavian settlement, coming at a time in the 980-90s when Danish attacks were again a pressing danger. Perhaps it was a way of thinking through how this new wave of attacks could be countered? Either way, it suggests that the 'Danishness' of Oda and Oswald continued to be thought relevant by their contemporaries, even though they were Christians and one or more generations removed from the original settlers.