'So glorious a gleam, over dale and down' 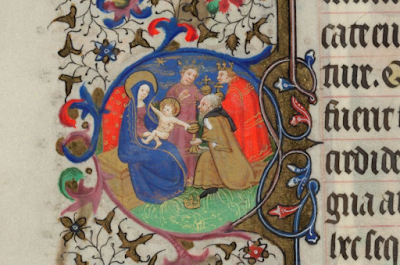 Two carols for Twelfth Night, the eve of the Epiphany. The visit of the Magi to the infant Jesus is a very popular subject in medieval carols, perhaps partly because of the appeal of the dramatic details of the Gospel narrative - the urgency of the questing kings, their tense interaction with Herod, the atmosphere of danger in which their search for the child takes place. But it might also be partly because Twelfth Night, as the culmination of the main period of Christmas festivities (though not the official end of the Christmas season, which was Candlemas), would have been a good time for singing carols. In the past I've posted a few examples of Epiphany carols out of the many which survive.

And here are two more which are roughly contemporary with each other, from manuscripts produced in the second half of the fifteenth century. They tell the same story, but in different ways; one makes effective use of dialogue and of melodious repetition, while the other is more interested in the symbolism of the tale, its fulfilment of prophecies, and the central image of the star - that gleam of unearthly brightness which guides the pilgrim-kings to their journey's end. 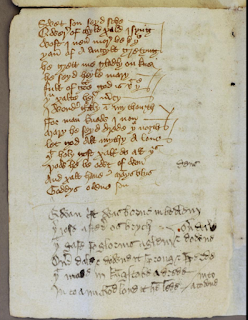 The beginning of this poem in Cambridge, St John's College, MS. S 54

The first poem comes from a scrappy little manuscript of carols, perhaps originally from East Anglia, which is now in St John's College, Cambridge. You can browse through it here, though it's not much to look at, and pretty difficult to decipher! It shows considerable signs of wear and was clearly more for use than for ornament, perhaps as an aide memoire to communal carol-singing. All the carols it contains were published in this edition, which I've relied on for the text which follows, though I've modernised the spelling and expanded abbreviations. There's no music in the manuscript, but the repeated lines give an unusually strong sense of how beautiful this text might be when sung (anyone fancy setting it to music?). The first verse is especially lovely, I think.

When Christ was born in Bethlehem,
There rose a star as bright as leme [fire, radiance]
That gave so glorious a gleam
Over dale and down,
Over dale and down it sprang and spread.
It made three kings to be adread [afraid]
Into an unchond land it them led [it led them to an unknown country]
Into a town;
They were three kings of great renown.

'Wend ye forth all three in fere, [all three of you go forth together]
And of that child if ye may hear,
That ye will come again in fere
I you beseech,
I you beseech that ye me say
As ye come homeward again in your way
That I myself him worship may,
That child so meek,
On my bare feet I would him seek.'

The kings no longer there abode
But forth to Bethlem then they rode,
And the star before them glode [glided]
Until they were,
Until they were where Jesu lay,
Wounden in a crib of hay;
Them thought it was a poor array.
[line missing]
Of prince of peace that hast no peer.

'Now kneel we down, all three in fere,
And offer to this darling dear
Gold for [aye?] and rekels clear [rekels is an old word for incense]
And myrrh also,
And myrrh also in tokening
That he is very man and king,
Suffering prince over all thing,
One and no mo [other/more]
For holy writ bears witnesses also.'

An angel warned them in their sleep
That they should them for Herod keep [beware of Herod]
They thanked God with devotion deep
And home they went,
And home they went on their journey.
When thereof Herod heard say,
He said 'Alas, and welaway,
For I am shent! [ruined]
This child, he will my kingdom hent!' [seize my royal power]

The children sprongyld on the spears, [struggled]
The mothers wept full bitter tears,
That Herod did them guiltless derys [caused them, innocent, terrible harm]
That fiend so fell,
That fiend so fell, foul must him befall,
That thus these children martyred all.
Unto Mary we gye and call [turn and appeal]
To shield us from the pit of hell
There in bliss well.

My favourite thing about this carol is the first verse, with those lovely alliterative phrases describing the star. After that, I also like the easy shifts between narrative and speech, especially between Herod and the Magi. Herod gets a verse to himself, and a bit of angry expostulation, true to his usual presentation in medieval literature: he's often shown as a blusterer, full of angry words, and that's how he comes across on the stage of medieval mystery plays, where his storming and ranting became proverbial. (That's what Hamlet is referring to when he advises his actors not to overdo their storms of passion, like those who seek to 'out-Herod Herod' on the stage with furious gestures and shouting). He exclaims angrily here, and his words to the three kings briefly sketch a dishonest, insinuating character: his promise 'On my bare feet I would him seek' has the exaggerated touch of a confident liar. The carol seems about to end in a dark place, with his anger and cruelty - until that last turn, 'unto Mary'. Again, it recalls the effect sought in medieval mystery plays, which intercut scenes of Herod's pride, rage and tyranny with the exact opposite, the next stage in the story, at Candlemas: there the earthly power embodied by Herod is shown to be vain, while poverty, patience, innocent love and frail old age encounter a light hidden from the eyes of the powerful. 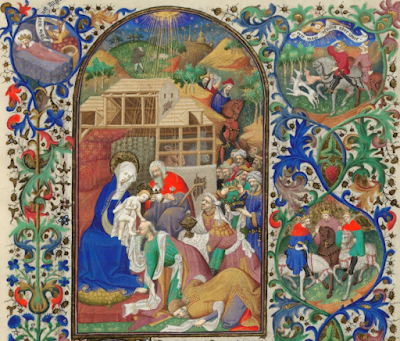 Next, another carol from the 1492 collection of James Ryman, Franciscan friar of Canterbury. This too tells the story of the Magi's visit, but through its refrain, and the couplet which is repeated at the end of each stanza, it keeps drawing our attention back to the star, and the day of its appearance - this day.

A star shone bright on Twelfth Day
Over that place where Jesus lay.

On Twelfth Day this star so clear
Brought kings three out of the east
Unto that king, that hath no peer,
In Bethlehem Judah, where he did rest.
This star that day then went away
From that sweet place where Jesus lay.

Both gold, incense and sweet myrrh tho [then]
All three they gave unto that child,
The which is god and man also,
Born of a virgin undefiled.
This star that day then went away
From that sweet place where Jesus lay.

For he was king of majesty,
They gave him gold with great reverence.
For he was god in persons three,
Meekly to him they gave incense.
This star that day then went away
From that sweet place where Jesus lay.

For he was man, they gave him than [then]
Myrrh in token that he should die
And be buried for sinful man
And arise again and to bliss stye. [ascend]
This star that day then went away
From that sweet place where Jesus lay.

When their offering all three had made
To Christ, that king and lord of all,
Right soon the star away did fade,
That brightly shone over that hall.
This star that day then went away
From that sweet place where Jesus lay.

As they were going in their way,
They met Herod, that mody king. [proud king]
He bade them wit where that child lay, [told them to find out where the child lay]
And come by him and word him bring.
This star that day then went away
From that sweet place where Jesus lay.

King Herod fain would them have slain,
But they were warned on a night
They should not go by him again,
By an angel both fair and bright.
This star that day then went away
From that sweet place where Jesus lay.

They were full glad, and as he bad
They be gone home another way,
And King Herod was wroth and sad,
That he of them had lost his prey.
This star that day then went away
From that sweet place where Jesus lay.

Into Egypt Joseph then fled
With the mother and with the child,
Where they abode til he was dead, [they lived until Herod was dead]
And of his will he was beguiled. [and was thwarted of his will]
This star that day then went away
From that sweet place where Jesus lay.

King Herod then in his great wrath
Seeing of them his purpose lorn [seeing his plans for them lost]
Infants full young he put to death
Through all Bethlehem, that there were born.
This star that day then went away
From that sweet place where Jesus lay.

Then, as the prophet Ysay [Isaiah]
Had prophesied long time before,
A voice was heard in bliss on high
Of great weeping and wailing sore.
This star that day then went away
From that sweet place where Jesus lay.

Honour to Christ, that now was born,
As prophecy had said before,
To save mankind, that was forlorn,
And to his bliss for to restore.
This star that day then went away
From that sweet place where Jesus lay.

The events of the carol are explicitly set on 'Twelfth Day', and if you imagine this carol being sung at Twelfth Night festivities, there's a particular immediacy to the time reference - it was on this day that the star 'did fade' and 'went away / from that sweet place where Jesus lay'. (In a neat touch, the carol itself has twelve verses.) I like that emphasis on departure, as if to suggest that it's not only the star which takes its leave on Twelfth Day, having done its work; it's also the Christmas season itself, and there's a sense of an ending here, a culmination. Just as the star departs from the 'sweet place' of the birth, and the three kings take their departure, and Joseph and Mary flee into Egypt, so we as the readers of this carol are taking our leave of Christmas - with all its sweet joys - on Twelfth Day. 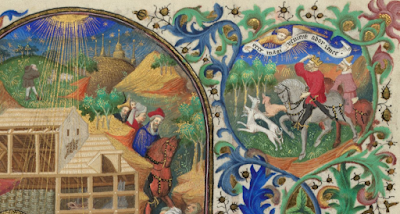