'There is a blossom sprung of a thorn' 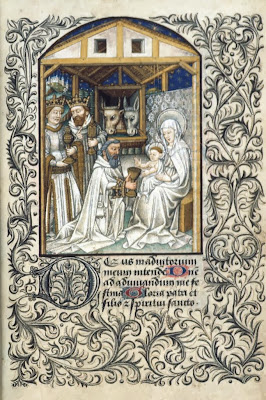 In poetry about the Epiphany, you sometimes find depictions of the three kings representing the three ages of man - one young, one in the prime of life, and one aged. A modern example is Dorothy L. Sayers' poem 'The Three Kings', in which they are distinguished by the gifts they bring: the sorrowful youngest king brings myrrh, the middle-aged priest brings incense, and the oldest king brings golden baubles as baby toys. A similar idea is found in this sixteenth-century English carol called 'There is a blossom sprung of a thorn', but here the three kings apparently each see a different aspect of Christ as they present their gifts to him: the oldest king sees a judge; the middle king sees a baby; the youngest king sees Christ the Redeemer of mankind.

The carol comes from Balliol College MS. 354, the commonplace book of a London grocer named Richard Hill, which you can see here.

1. There is a blossom sprung of a thorn,
To save mankind that was forlorn,
As the prophets said before,
Deo Patri sit gloria.

2. There sprang a well at Mary's foot,
That turned all this world to bote; [redemption]
Of her took Jesu flesh and blood,
Deo Patri sit gloria.

3. From that well there stretched a stream,
Out of Egypt into Bethlehem;
God through his highness turned it again,
Deo Patri sit gloria.

4. There were three kings of divers lands,
They thought a thought that was strong,
Him to seek and thank among.
Deo Patri sit gloria.

5. They came richly with their presents,
With gold, myrrh and frankincense,
As clerks read in their sequence,
Deo Patri sit gloria.

6. The eldest king of the three,
He went foremost, for he would see
What doomsman that this should be,
Deo Patri sit gloria.

7. The middlemost king up he rose,
He saw a babe in arms close;
In middle age he thought he was.
Deo Patri sit gloria.

8. The youngest king up he stood,
He made his offering rich and good,
To Jesus Christ, that shed his blood.
Deo Patri sit gloria.

9. There shone a star out of heaven bright,
That men of earth should deem aright
That this was Jesu, full of might.
Deo Patri sit gloria. 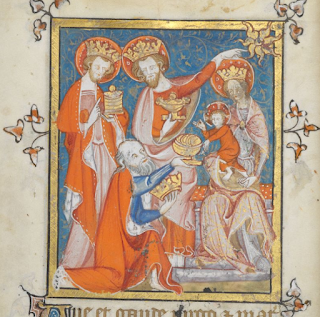 Over the centuries, the significant number three has been a spur to allegorise the Magi's gifts into various different forms of threefold meaning. One traditional version, which many people now encounter in childhood, is the allegorical schema popularised by 'We three kings of Orient are': gold for kingship, frankincense for divinity, myrrh for mortality. But there are other possibilities, of course! Here's a short reflection on the kings' gifts from Piers Plowman, Passus 19: 'All the wit of the world was in those three kings,' Langland says, and he interprets the gifts as reflecting three aspects of Christ's own kingship, 'Reason and Righteousness and Ruth', i.e. wisdom, justice and compassion.

Kings came after, kneeled and offered incense,
Myrrh, and much gold, not asking for mercy
Or for any kind of reward, but acknowledging him sovereign
Of land, sun, and sea; and afterwards they went
Into their royal domains by an angel's counsel.
And there was that word fulfilled which you spoke of earlier:
'All things in heaven and earth will bow down at the name of Jesus'.
For all the angels of heaven at his birth kneeled,
And all the wit of the world was in those three kings.
Reason and Righteousness and Ruth they offered,
And because of that wise men at that time,
Masters and lettered men, called them 'Magi'.*
The first king came with Reason, in the form of incense.
The second king afterwards truly offered
Righteousness as red gold, Reason's companion.
Gold is likened to Justice, which shall endure for ever,
And Reason to incense, which is right and true.
The third king came then, and kneeled to Jesu,
And presented him with Pity, appearing as myrrh;
For myrrh means mercy, and gentle speech of tongue.
All honest things of earth were offered thus at once
Through three kinds of kings kneeling to Jesu.


*Incidentally, this is only the second occurrence of the word 'Magi' recorded in English in the OED; in Middle English 'three kings' was the more common and familiar term.
Posted by Clerk of Oxford at 11:02 am