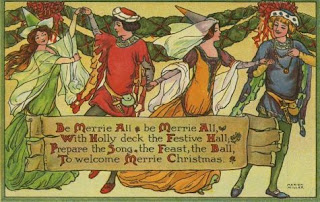 Here's a bit of cheery historical fantasy to cheer the January days, from Walter Scott's Marmion, published in 1808. Half-savage Vikings and jolly merry men - this extract contains everything the nineteenth century liked to believe about the medieval period! (And I do too, deep down, except for one detail - it's hard to think that Norse skalds 'yelled out' their intricate verses...)

When anyone tells you that the Victorians - or more specifically Charles Dickens - invented the modern Christmas, you could cite this passage in counter-argument; we really should give Walter Scott some credit too!

Heap on more wood! – the wind is chill;
But let it whistle as it will,
We’ll keep our Christmas merry still.
Each age has deem’d the new-born year
The fittest time for festal cheer:
Even, heathen yet, the savage Dane
At Iol more deep the mead did drain;
High on the beach his galleys drew,
And feasted all his pirate crew;
Then in his low and pine-built hall
Where shields and axes deck’d the wall
They gorged upon the half-dress’d steer;
Caroused in seas of sable beer;
While round, in brutal jest, were thrown
The half-gnaw’d rib, and marrow-bone:
Or listen’d all, in grim delight,
While Scalds yell’d out the joys of fight.
Then forth, in frenzy, would they hie,
While wildly loose their red locks fly,
And dancing round the blazing pile,
They make such barbarous mirth the while,
As best might to the mind recall
The boisterous joys of Odin’s hall.

And well our Christian sires of old
Loved when the year its course had roll’d,
And brought blithe Christmas back again,
With all his hospitable train.
Domestic and religious rite
Gave honour to the holy night;
On Christmas Eve the bells were rung;
On Christmas Eve the mass was sung:
That only night in all the year,
Saw the stoled priest the chalice rear.
The damsel donn’d her kirtle sheen;
The hall was dress’d with holly green;
Forth to the wood did merry-men go,
To gather in the mistletoe.
Then open’d wide the Baron’s hall
To vassal, tenant, serf and all;
Power laid his rod of rule aside
And Ceremony doff’d his pride.
The heir, with roses in his shoes,
That night might village partner choose;
The Lord, underogating, share
The vulgar game of ‘post and pair’.
All hail’d, with uncontroll’d delight,
And general voice, the happy night,
That to the cottage, as the crown,
Brought tidings of salvation down.

The fire, with well-dried logs supplied,
Went roaring up the chimney wide;
The huge hall-table’s oaken face,
Scrubb’d till it shone, the day to grace,
Bore then upon its massive board
No mark to part the squire and lord.
Then was brought in the lusty brawn,
By old blue-coated serving-man;
Then the grim boar’s head frown’d on high,
Crested with bays and rosemary.
Well can the green-garb’d ranger tell,
How, when, and where, the monster fell;
What dogs before his death to tore,
And all the baiting of the boar.
The wassel round, in good brown bowls,
Garnish’d with ribbons, blithely trowls.
There the huge sirloin reek'd; hard by
Plum-porridge stood, and Christmas pie;
Nor fail’d old Scotland to produce,
At such high tide, her savoury goose.
Then came the merry makers in,
And carols roar’d with blithesome din;
If unmelodious was the song,
It was a hearty note, and strong.
Who lists may in their mumming see
Traces of ancient mystery;
White shirts supplied the masquerade,
And smutted cheeks the visors made;
But, O! what maskers, richly dight,
Can boast of bosoms half so light!
England was merry England, when
Old Christmas brought his sports again.
‘Twas Christmas broach’d the mightiest ale;
‘Twas Christmas told the merriest tale;
A Christmas gambol oft could cheer
The poor man’s heart through half the year.
Posted by Clerk of Oxford at 1:48 pm