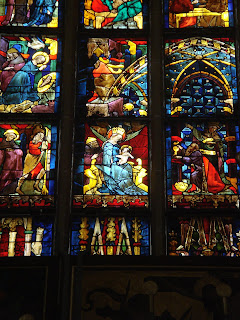 An Epiphany scene from Munich

I'm never really sure if Twelfth Night is properly the 5th or the 6th of January, but today certainly is the feast of the Epiphany (technically not for the Catholics of England, alas, but I'm afraid I just can't accept this one as a moveable feast) - and so there's time to squeeze in this carol. It's yet another from the fifteenth-century Sloane MS. 2593, and it's a pretty long one, but worth reading at least as far as the lovely verse 8, and the rather odd verse 16 (!), which in its depiction of a ranting Herod echoes the presentation of that king in the mystery plays (it made me think of this).

Traditionally, today is the end of one stage of the Christmas season but not by any means the end of the whole thing - the medieval Church gave forty days to Christmas, until the Feast of the Purification (Candlemas) on February 2nd. We give forty days to Lent, so why not to Christmas? As it says in The Liturgical Year, at Christmas "Heaven sends us a present of its own joy: we need joy, and forty days are not too many for us to get it well into our hearts". The refrain of one medieval carol proclaims, "Make we mirth/in Christ's birth/and sing from Yule till Candlemas!" We may have taken the Christmas decorations down, but I don't see any reason to stop singing, at least - and that means I'll probably post a few more carols between now and February 2.


Anyway, on to the Twelfth Night Carol. I've modernised the spelling (from this text); the refrain means "Kings shall come from Sheba, offering gold, frankincense and myrrh" (a quotation from a Latin Christmas hymn). In the original Herod is not proud but moody, a word I've written about before; in its early history this Old English word (modig) was a term of praise, meaning 'brave, bold, passionate', like a fierce and fearsome warrior. But even then it had overtones of 'proud, arrogant' and of 'angry, wrathful', both of which are part of the meaning here in reference to Herod. (One is tempted to say that the pagan's fierce hero is the church's proud sinner, but perhaps that's a bit simplistic). From this it came to mean (in the words of the OED) "indulging in moods of ill humour or depression; melancholy, gloomy; (now chiefly) given to unpredictable changes of mood, esp. sudden spells of gloominess or irritable sullenness". And now it applies mostly to sullen teenagers...

1. Now is the Twelfth Day come,
The Father and Son together are come,
The Holy Ghost, as they were one
Together.
God send us a good New Year!

2. I will you sing with all my might,
Of a Child so fair in sight,
A maiden him bore the other night,
So still;
As it was his will.

3. Three kings out of Galilee
Came to Bethlehem, that city,
For to go into that see
By night;
It was a full fair sight.

4. As they came forth with their offering,
They met with Herod, that proud king;
He asked about their coming
That tide,
And thus to them he said:

5. "From whence come ye, kings three?"
"Out of the East, as thou mayst see,
To seek Him that ever shall be,
Through right,
Lord and King of might."

6. "When ye have with that king been,
Come again this way by me,
And tell me the sights that ye have seen;
I pray
Ye go no other way."

7. Of Herod, that proud king,
They took their leave, of old and young;
And forth they went with their offering
In sight,
And there they came by night.

8. Into Bethlehem they did pass;
The star shone upon their face
Brighter than ever shone sun in glass
In land;
Jesu with Mary there they found.

9. When they came into the place
Where Jesu with His mother was,
They made offering with great solace,
Not fear,
With gold, incense and myrrh.

10. When they were homeward went,
The Father of heaven an angel sent
To those three kings that made presents,
Ere day,
And thus to them did say:

11. "My Lord hath warned you of your foe,
By King Herod that ye not go;
For if ye do, he will you slay,
And betray,
Go ye another way."

12. When they came home to their country,
Blithe and glad they were all three
Of the sights that they had seen,
By night,
Jesu and Mary bright.

13. With treason Herod began to say,
He thought Jesu to have slain;
Into Egypt they went full plain,
By side,
Joseph was their guide.

14. King Herod he made his vow,
Great plenty of children he slew,
He thought they would have been Jesu;
I say,
He failed of his prey.

15. Herod was wrath in royalty;
He slew children right great plenty
In Bethlehem, that fair city,
With strife;
Nor left he none alive.

17. Almighty God in majesty,
In one God persons three,
Bring us to the bliss that is so free,
Together;
And send us a good New Year!
Posted by Clerk of Oxford at 3:03 pm

The Feast of the Epiphany was always 6 January when I was growing up in a Roman Catholic household. It wasn't a moveable feast!

It's now celebrated on the nearest Sunday, at least in England and Wales. Thanks for commenting!

I'm trying to find the name of a carol, sung on 12th night, counting down from 12 to 1. It has an "aged happy bird" in the title - but it's not a partridge. Any ideas what carol this could be? (Its just for an answer to a quiz clue!). I have found a "pukeko in a ponga tree" - but I don't think that is right as there is no reference to it being "aged and happy". I've also done lots of research about Green Grow the Rushes - but can't any connection with a bird.

Do you think it might be 'Jolly Old Hawk'? You can see the lyrics here: http://www.informatik.uni-hamburg.de/~zierke/watersons/songs/jollyoldhawk.html