John Donne's 'A Hymn to Christ'

Every time I think I know the canon of John Donne all through, I read something that surprises me. I don't know how I missed this one, his 'A Hymn to Christ', written "at the author's last going into Germany".

That journey was apparently in 1619. The editor in that link also calls attention to the double meaning in the lines, "Thou lov'st not, till from loving more, thou free / My soule" - Ann More being the name of Donne's wife, who had died two years previously. Donne famously plays on her name and his own in this poem. 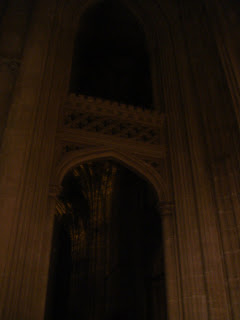 The going overseas theme, and the tension between forced and self-sought separations, rather reminds me of this poem by Gerard Manley Hopkins, though perhaps that's just me being literalistic. That poem is about Hopkins' exile (as he felt it) in Ireland, the period in which he wrote the so-called 'terrible sonnets'; and there's something terrible about this Donne poem too, in the true sense of the word - he seeks to divorce himself from all other loves in order to find the love of God, to sever himself from every earthly attachment by voluntarily choosing a state he refers to as winter, darkness, everlasting night. It's very bleak, really. 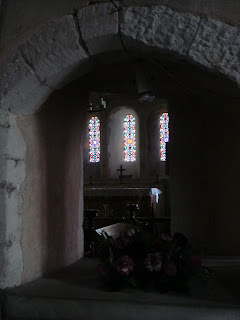 A Hymn to Christ, at the Author's last going into Germany

In what torne ship soever I embarke,
That ship shall be my embleme of thy Arke;
What sea soever swallow mee, that flood
Shall be to mee an embleme of thy blood;
Though thou with clouds of anger do disguise
Thy face; yet through that maske I know those eyes,
Which, though they turne away sometimes,
They never will despise.

I sacrifice this Iland unto thee,
And all whom I lov'd there, and who lov'd mee;
When I have put our seas twixt them and mee,
Put thou thy sea betwixt my sinnes and thee.
As the trees sap doth seeke the root below
In winter, in my winter now I goe,
Where none but thee, th'Eternall root
Of true Love I may know.

Nor thou nor thy religion dost controule,
The amorousnesse of an harmonious Soule,
But thou would'st have that love thy selfe: As thou
Art jealous, Lord, so I am jealous now,
Thou lov'st not, till from loving more, thou free
My soule: Who ever gives, takes libertie:
O, if thou car'st not whom I love
Alas, thou lov'st not mee.

Seale then this bill of my Divorce to All,
On whom those fainter beames of love did fall;
Marry those loves, which in youth scattered bee
On Fame, Wit, Hopes (false mistresses) to thee.
Churches are best for Prayer, that have least light:
To see God only, I goe out of sight:
And to scape stormy dayes, I chuse
An Everlasting night. 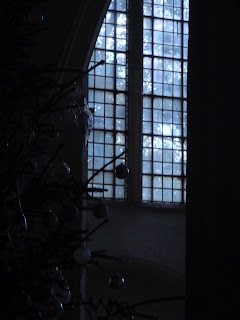 Posting this was not just an excuse to include pictures of 'churches with least light' - that was just a bonus (from the top: Canterbury Cathedral, Doddington, Ickham).
Posted by Clerk of Oxford at 3:27 pm

I'm reading this poem out of the Norton Anthology: English Literature. In the footnotes, it says this poem was actually written before Donne went to Germany in 1619 as chaplain to the Earl of Doncaster - a diplomatic mission. As I read it, I didn't think it was quite as bleak. It seemed to me that he was saying he would give up all of these earthly pleasures to try and prepare his soul for God. Any thoughts?

Thanks for commenting (and sorry it took me a while to reply)! I think you're right that this is clearly a self-chosen renunciation, and is intended to ultimately have a positive effect in his relationship with God. He hopes to find a divine love to replace the human loves he's left behind. Whether that outlook is bleak is just a matter of opinion, really - personally I do find it a very sad poem, but that might just be me...