Some Pictures from Chilham Church

Chilham is a picturesque village a few miles from Canterbury, which is so chocolate-box pretty it's been used in many films and TV programmes - the most recent BBC adaptation of Emma, for instance, and the 1944 A Canterbury Tale, my favourite film of all time. It has a medieval church full of interesting features, and this post contains some pictures of them which I took last week. I've have taken more pictures of the village itself, but my poor little camera, giving its life in the service of this blog, was broken by falling on a stone church floor - an occupational hazard of church-visiting with a camera. A Google image search shows you just how lovely the place is, though. 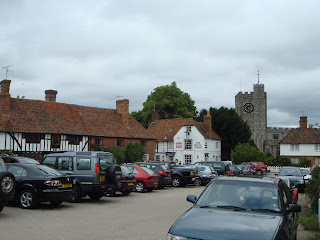 The church is directly opposite Chilham Castle, which stands almost right on the village square. This picture is taken from the churchyard, so you see how all the necessities of village life - church, pub and grand house - are fulfilled here: 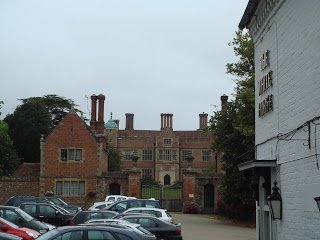 The church is a solid, substantial kind of building, mostly from the 13th century but considerably restored. The tower, to the west of the building, is 15th century (apparently you can see the towers of Canterbury Cathedral from the top). That green lump between it and the war memorial is an ancient yew tree, much older than the present building - it is supposed to have been planted in the seventh century, within a hundred years of the death of St Augustine: 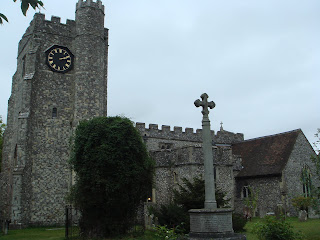 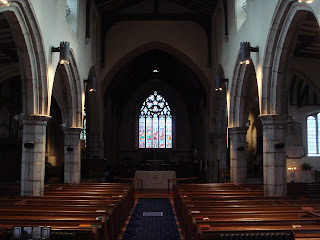 After the yew tree, the oldest thing in the church is this tomb, which was traditionally believed to contain the remains of St Augustine, but the last time it was opened to ascertain the truth of this, the only thing inside was the record of a previous attempt at the same inquiry! 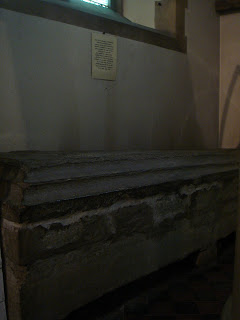 There are one or two other reminders of the church's medieval history - these steps to nowhere, for instance, would once have led to the rood loft: 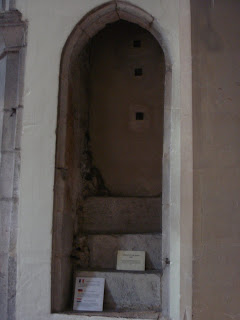 But the grandest features of the church are of a later date. The close proximity of a wealthy family at the castle helps to explain the array of monuments like this one, to the sister of Sir Dudley Digges of Chilham Castle (the website of which says "after Sir Dudley built the house, the only achievement of his descendants was to lose it"): 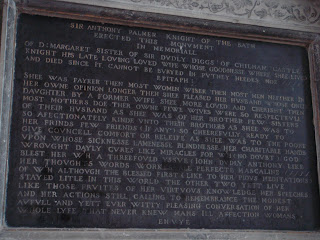 It reads (with a little added punctuation):

Sir Anthony Palmer Knight of the Bath erected this monument in memoriall of Margaret, sister of Sir Dudly Diggs of Chilham Castle Knight, his late loving loved wife whose goodness where she lived and died since it cannot be buryed in putney (?!) needes noe epitaph [and yet, it goes on!]:

Shee was fayrer then most women wiser then most men neither in her owne opinion longer then shee pleased her husband whose onely daughter by a former wife shee more loved and cherist then most mothers doe ther owne. Fewe wives were so respectfull of their husbands as shee was of her brother; few sisters so affectionately kinde unto their brothers as shee was to her frinds; few friends (if any) so cheerefully ready to give councell comfort or reliefe as shee was to the poor upon whose sicknesse lamenesse blindnesse her charitable hands wrought dayly cures like miracles for which (no doubt) God blest her with a threefould yssue, John, Dudly, Anthony, like her thoughts, words, workes all perfecte mascaline… of which although the blessed first (like to her pious meditations) stayed little in this world the other two yett live like those fruites of her virtuous knowledge her speeches and her actions still calling to remembrance the modest aufull and yett ever witty pleasing conversation of her whole lyfe that never knew mans ill affection [or] womans envye.


Isn't that wonderful? Margaret Palmer died in 1619; elsewhere in the church, another wife, who lived more than two hundred years later, is commemorated thus: "By her will, she desired that a plain memorial erected to her memory, should only express that she lived the greatest part of her long life, the happy wife of Sir Thomas Mantell, Knight, and died fully sensible of his many virtues." 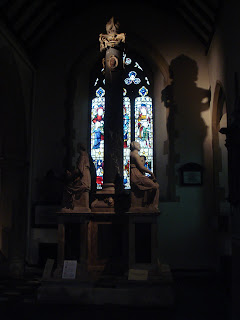 The female figures are the four cardinal virtues, but I'm not sure which one this is: 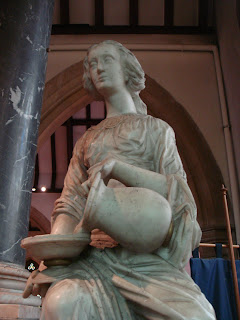 This is on one side of the altar; on the other is this monument from 1816, by Sir Francis Chantrey: 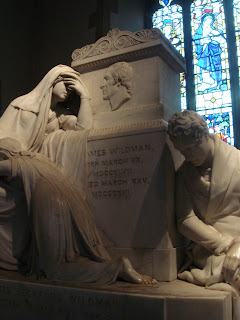 The grieving family of James Wildman, another owner of Chilham Castle, are beautifully depicted - look at these fingers: 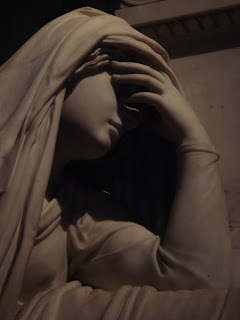 And the coat of the young man, who I think is Wildman's son, James Beckford Wildman: 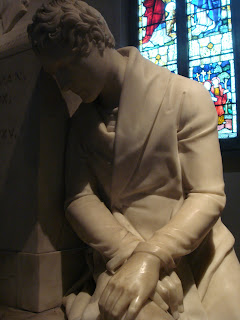 Nearby is this touching monument to two children of the Hardy family, Arthur and Edmund, whose family owned Chilham Castle from 1861 to 1918: 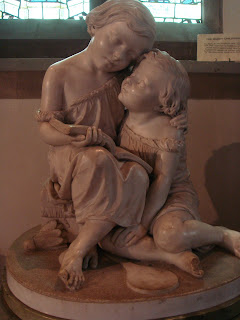 Notice the battledore and shuttlecock on the floor - supposedly the only church monument in England to depict children's toys.

A later Hardy, a casualty of the First World War, is commemorated by this series of stained glass windows, which depict the four archangels - in descending order, Uriel, Raphael, Michael (look at that superb blue dragon!) and Gabriel: 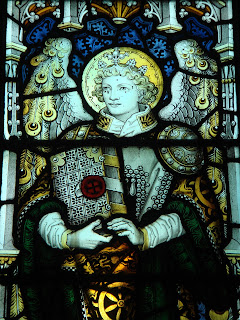 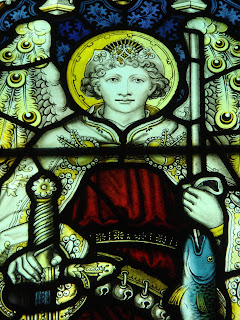 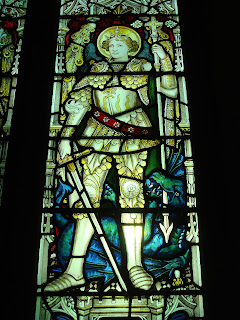 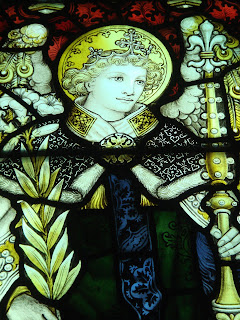 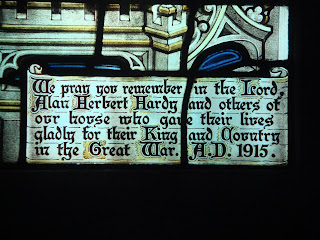 They are matched on the other side of the church by four depictions of the saints of the British Isles, a memorial to Charles Stewart Hardy (d.1914): 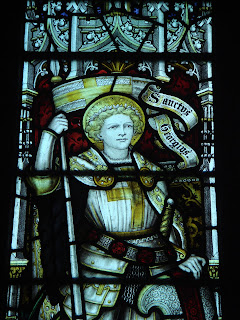 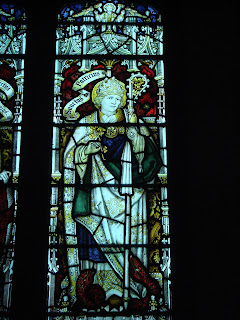 Note St Patrick's golden shamrock, and the snakes. Here's another view of St George, so you can see his shield and his own scaly blue-and-green dragon: 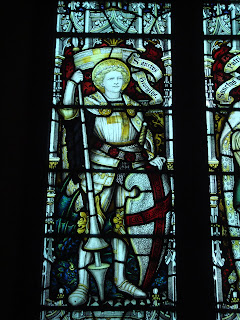 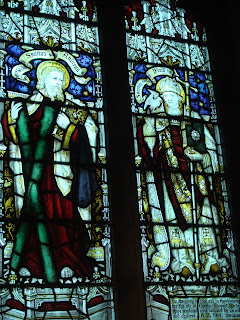 The last memorial of note is this one to Frederick Lacy Dick, startingly raw in its grief and the detail it provides: 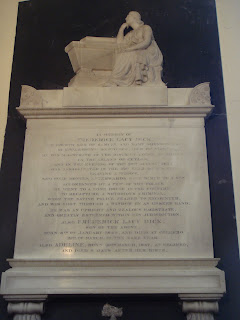 It's a little hard to read but it says "He was magistrate of the district court at Negambo in the island of Ceylon, and in the evening of the 29th August, 1847, was assassinated in the 32nd year of his age, leaving a widow, who four months afterwards gave birth to a son. Accompanied by a few of the police he went to a lone house in the country to recapture a notorious criminal, whom the native police feared to encounter, and was shot through a window by an unseen hand. He was an upright and zealous magistrate, and greatly esteemed within his jurisdiction."

His poor widow. She had just lost a baby daughter a few months before her husband’s death; and the child born posthumously lived less than three months. 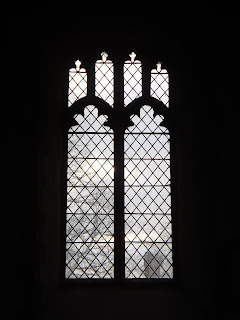 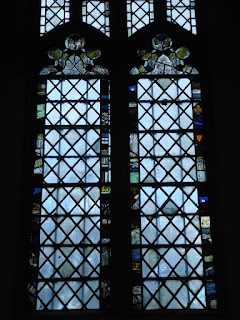 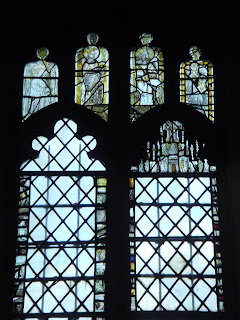 Fragments of older glass, reset. And here's a last picture, a nice touch by someone - an extract from John Donne's sermon on 'send not to ask for whom the bell tolls', at the foot of the bell tower.