The Song of the Pilgrims: 'O Thou, God of all long desirous roaming' 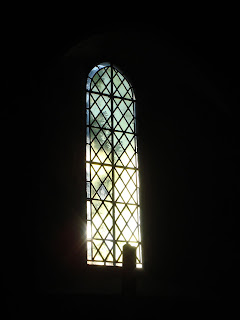 The Song of the Pilgrims
Rupert Brooke

(Halted around the fire by night, after moon-set, they sing this beneath the trees)

What light of unremembered skies
Hast thou relumed within our eyes,
Thou whom we seek, whom we shall find? . . .
A certain odour on the wind,
Thy hidden face beyond the west,
These things have called us; on a quest
Older than any road we trod,
More endless than desire. . . .

Far God,
Sigh with thy cruel voice, that fills
The soul with longing for dim hills
And faint horizons! For there come
Grey moments of the antient dumb
Sickness of travel, when no song
Can cheer us; but the way seems long;
And one remembers. . . .

Ah! the beat
Of weary unreturning feet,
And songs of pilgrims unreturning! . . .
The fires we left are always burning
On the old shrines of home. Our kin
Have built them temples, and therein
Pray to the Gods we know; and dwell
In little houses lovable,
Being happy (we remember how!)
And peaceful even to death. . . .

O Thou,
God of all long desirous roaming,
Our hearts are sick of fruitless homing,
And crying after lost desire.
Hearten us onward! as with fire
Consuming dreams of other bliss.
The best Thou givest, giving this
Sufficient thing - to travel still
Over the plain, beyond the hill,
Unhesitating through the shade,
Amid the silence unafraid,
Till, at some sudden turn, one sees
Against the black and muttering trees
Thine altar, wonderfully white,
Among the Forests of the Night.


For some reason these days between the New Year and the Epiphany, for me, are about journeying - a memory from childhood, the little bright kings edging daily closer to the rest of the nativity set. The best poetry about the Epiphany (this, for instance) is about the journey, theirs and ours, and the guiding star and the lengthy way; shepherds rush, but the kings have to take their time. 'The Song of the Pilgrims' is not an Epiphany poem, but it's a song of journeying and therefore, I think, appropriate for this season. It's also perhaps the closest thing to a religious poem Rupert Brooke ever wrote (he was generally a sceptic about religion, as poems like this one suggest); despite this, it's not uncharacteristic of him in theme or expression. It was written in 1907, when Brooke was twenty.
Posted by Clerk of Oxford at 3:54 pm