'The jewel of the sky, the sun at its hottest' 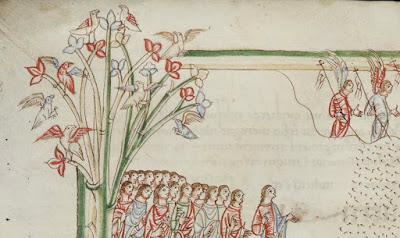 Birds in a tree, from the Eadwine Psalter Cambridge, Trinity College, R.17.1, f. 275v
It's very hot at the moment. That's my only reason and excuse for posting some extracts of summer poetry from the Old English poem The Phoenix, in which an Anglo-Saxon poet who must have been a bit of a sun-worshipper comes up with a dazzling array of metaphors for the 'candle of the heavens' which burns so fiercely above us.

This poem, which survives in the tenth-century Exeter Book, is based on a Latin source and describes the legend of the regenerating phoenix. As was common in medieval thought about the phoenix, the story is interpreted as an allegory of Christ's resurrection and the rebirth of the redeemed human soul. You can read a translation of the whole poem here (the translation in this post is my own). The phoenix is imagined as living in a natural landscape of glorious beauty, which means the poem itself, to keep pace, becomes elaborately ornamented and richly beautiful in its language. The language of this poem is not easy, but it contains some of the loveliest nature writing in Old English - Anglo-Saxon poets were pretty adept at describing wintry scenes, and could probably compose word-sketches of stormy seas and hail-scarred cliffs in their sleep, but this poet, for a change, gets to do some lovely things with sunshine and leaf-shade and the full-blown radiance of summer.

Serene is that plain of victory; the sunny grove glows,
the joyous wooded holt. The fruits never fall,
bright branches, but the trees stand
ever green, as God commanded them.
Winter and summer the wood is alike
laden with fruits; no leaf ever withers
beneath the sky, nor does fire harm them
eternally...

This is the earthly paradise of eternal summer, refreshed by sparkling waters, in which the phoenix lives. There, every day, it pays homage to the glory of the sun:

He beholds the journey of the sun
and comes to meet God's candle,
eagerly observes the glad jewel
when that noblest of stars rises up
above the waves, shining from the east;
the Father's ancient work glitters with ornaments,
bright token of God.

Look at all those poetic phrases for the sun, packed into just seven lines: God's candle, jewel of gladness, the noblest of stars... I've written before about how another Anglo-Saxon poet used the image of the sun as a jewel, rising to its highest at the summer solstice, to evoke the Son himself, the ascended Christ; and since the phoenix's resurrection analogises Christ's, perhaps that should be in the back of the reader's mind here too. Both might be called the 'Father's ancient work, the bright token of God'.

As the phoenix grows old, it leaves this beautiful homeland to live on earth and makes itself a dwelling-place closer to the human world, at the top of a lofty tree:

There he abides and lives within a lofty tree
in the wood, the roots fast fixed
under the roof of the heavens, a tree which people on earth
call 'Phoenix', from that bird's name.
That tree has the King, mighty in glory,
the Measurer of mankind, granted - I have heard -
that alone of all the trees
which lift up their branches upon the earth
it blooms the brightest. No wicked thing
can do it any harm; it is shielded for ever,
abiding untouched, as long as the world stands.

Again there are delicate but deliberate echoes here of Old English Christian poetry, which don't entirely come across in translation: 'heanne beam' ('lofty tree') is a phrase which elsewhere describes the cross, so often imagined in early medieval literature as a lively and living tree. This tree's unique and superior beauty, 'alone of all trees', might remind you of the Crux Fidelis:

Steadfast cross, above all other,
one and only noble tree;
none in foliage, none in blossom,
none in fruit thy peer may be.

So too its steadfastness, standing 'as long as the world stands': to stand is the characteristic of the cross, the tree which is the still point of the turning world, the axis of the universe, the world-tree. 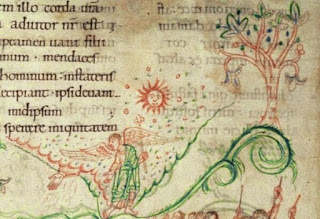 The sun in an Anglo-Saxon psalter (BL Harley 603, f.33v)
High in this tree the phoenix builds itself a nest, preparing for the cleansing fire which will be kindled by the blaze of the summer sun:

When the wind dies down, the weather is fair,
the holy gem of the heaven shines brightly,
the clouds are dispersed, the tumult of the waters
grows still, every storm beneath the skies
is calmed, the burning candle of the air
shines from the south, giving light to men,
then he begins to build in the branches,
to prepare a nest. He has a great desire
to be able to swiftly turn from old age
back towards life, through a surge of the spirit,
receive youth again. Then from far and near
he collects and gathers the sweetest spices
to that dwelling-place, every kind of noble fragrance,
pleasant herbs and fruits of the woods,
which the King of Glory,
Father of every beginning, created
across the world for the glory of mankind,
sweet under the skies. There he carries
bright ornaments into that tree;
there the wild bird builds his house
in the wilderness, on the tall tree,
fair and joyous, and there he dwells
alone in that sunny chamber, and on the outside
surrounds himself, body and feathers,
in the shade of the leaves, on every side
with blessed scents and the noblest
fruits of the earth. He sits,
eager for a journey. When in the summer
the jewel of the sky, the sun at its hottest,
shines above the shadows and fulfils its destiny,
gazing far across the world, then his house
is heated by the brilliant radiance.
The herbs are warmed, the beloved hall smokes
with sweet fragrances; then, seized by fire,
the bird burns in the flames within its nest... 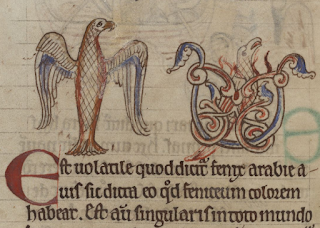 Phoenix (Cambridge, Corpus Christi College, MS 022, f.166v)
Gorgeous stuff. This fire of self-immolation, as well as mirroring Christ's sacrifice, also echoes the seasonal cycle of yearly growth, death, and rebirth: the bird building his nest suggests the spring, it's the height of summer when the fire is kindled, and then comes the harvest:

As the blazing sun of our present heatwave scorches the ground, drying the leaves to dust and turning the grass yellow, it lays bare to the eye the process this poet is describing: summer turning into harvest, as the year begins to die like the phoenix. It's almost Lammas, after all, and autumn is less than a month away - time to be harvesting.
Posted by Clerk of Oxford at 5:48 pm No comments: