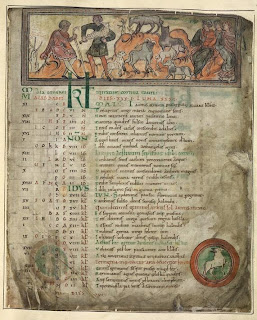 An Anglo-Saxon calendar for May, marking the beginning of summer on May 9
(11th century, BL Cotton Tiberius B V, f. 5)

Good news: according to some medieval systems of reckoning, such as that followed in Anglo-Saxon England, 9 May is officially the first day of summer. In this system of calculation summer lasts for ninety days, from today until 6 August, and that means its mid-way point falls around the summer solstice on June 21-3. (We still call this 'midsummer', which is also what the Anglo-Saxons called it.)

Over the course of the past year I've written posts at the beginning of autumn on 7 August, winter on 7 November, and spring on 7 February, exploring how those seasons are described in some Anglo-Saxon poems. So here's the summer edition to complete the set.

First, the coming of summer as extolled in the Old English Menologium, ll.75-95 (I posted part of this last year alongside some later medieval descriptions of May):

Six nights after this in the city
comes sweeping swiftly, gloriously adorned
with woods and plants, radiant þrymilce
into the towns; mighty May brings
blessings everywhere among the multitudes.
On the same day those noble companions,
Philip and James, brave thegns,
gave their lives for love of the Lord,
And two nights afterwards God showed
blessed Helena the noblest of trees,
on which the Lord of the angels suffered
for love of mankind, the Ruler on the gallows
by his Father's will. So around the first week,
less one night, sun-bright days
bring to men summer to town,
with warm weather. Then the meadows
quickly bloom with blossom, and joy mounts up
throughout the earth among many kinds
of living creatures, who in manifold ways
speak the praise of the King, extol the glory
of the Almighty.

þrymilce is the Old English name for May, which is explained by Bede as referring to the fact that 'in that month the cattle were milked three times a day; such was at one time the fertility of Britain, or of Germania, from where the nation of the English came to Britain.' This abundance is perhaps why we are told here that May brings þearfe, which I translated as 'blessings' but which more strictly means something like 'goods', things which are needful. It brings abundance in everything and especially in wudum and wyrtum, 'woods and plants', with the fullness of summer growth. Falling between May 1st and the coming of summer on the 9th are two feasts, of Philip and James and of the Finding of the Holy Cross on May 3 - and amidst these blossoming woods, it seems natural for the cross to be described as æþelust beama, 'noblest of trees'.

Six days later, summer with its 'sun-bright days' (sigelbeorhte dagas) brings warmth, blossom and birdsong, and so joy mounts up (astihð) everywhere, like the rising sun. Later in the poem, the summer solstice at midsummer is described in similar language:

[June], in which the jewel climbs up
into the heavens highest in the year,
brightest of stars, and descends from its place,
sinks to its setting. It likes then to gaze longer
upon the earth, the fairest of lights
to move more slowly across the fields of the world,
the created globe.

This talk of the sun rising up through the heavens might perhaps recall a feast which often falls in May - the Ascension, of which it would also be possible to say on þam gim astihð on heofenas up. (Especially since, as we saw in December, Christ is the Arkenstone - a name for Christ which seems more natural when you remember how frequently in Old English poetry the sun is called a gem.) The Old English poem Christ II offers a wonderful take on the Ascension, but I won't attempt to summarise it here because it's too complex and just too glorious to paraphrase; instead I'll refer you to this post.

The sixth leap,
the Holy One's hope-play, was when he ascended to heaven
into his former home. Then the throng of angels
in that holy tide was made merry with laughter,
rapt with joy. They saw the glory of majesty,
first of princes, seek out his homeland,
the bright mansions. After that the blessed city-dwellers
endlessly delighted in the Prince's play. 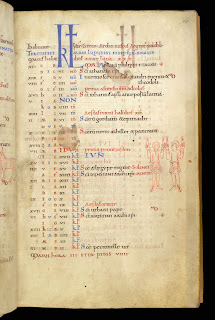 Thinking about summer and the climbing sun/Son reminds me too of Ælfric's homily for Rogationtide (the season of three days before the Ascension). Here he explores parallels between the sun and the Trinity:


'The sun which shines above us is a physical creation, but nevertheless has three properties: one is its physical substance, that is the orb of the sun; the second is the light or brightness which is always shining from it, which enlightens the whole world; the third is the heat, which comes to us with its beams. The light is always coming from the sun, and is always with it; and the Son of Almighty God is always begotten of the Father, and always dwelling with him. The apostle said of him that he was the brightness of his Father's glory. The sun's heat proceeds from it and from its beams, and the Holy Ghost is always proceeding from the Father and the Son equally. About this it is written, 'There is nothing which can be hidden from its heat'...

We speak about God - the mortal about the immortal, the weak about the almighty, wretches about the merciful. But who may worthily speak about that which is beyond speech? He is without measure, because he is everywhere. He is without number, because he is eternal. He is without weight, because he upholds all creation without labour; and he ordained it all with three things, that is, measure, number and weight. But know that no man can speak fully about God, since we cannot even search out or reckon up the creation which he made. Who may speak in words of the ornaments of the heavens, or the fruitfulness of the earth? or who may sufficiently praise the course of all the seasons, or all other things, when we cannot even fully comprehend with our sight the physical things which we can see?'

Again we hear how the sun astihð into the heavens, but this time it's to make a larger point:


'Consider the sun, how high it climbs, and how it sends its light throughout the whole earth, and how it enlightens all the earth which is inhabited by mankind... Now, think how much greater is God's presence, and his power, and his visitation everywhere. Nothing withstands him, neither stone walls nor broad barriers, even though they withstand the sun.' 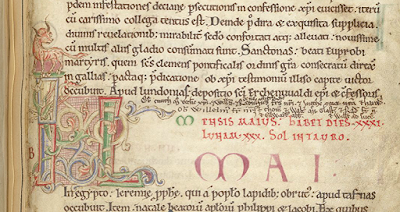 The opening of the entries for May in a Martyrology from St Augustine's, Canterbury
(c.1100; BL Cotton Vitellius C XII, f. 127)

And that, I think, concludes this series on the cycle of the year in Anglo-Saxon texts. These posts have been much more popular than I would have expected, considering how obscure the poems in question are (especially the Menologium!). I like to think it has something to do with the pleasingly ordered system of calculation which allots equal, well-reasoned tallies of days to each season. It's not a system I'd given much thought to before this time last year, but it does make an intriguing way to think about and mark the passage of time, distinct from any system we use today and yet instantly recognisable if you pay attention as the seasons change. The dating feels very right, at least for the cycle of seasons where I live in the south of England. But it's not about feelings, of course - it's about how time works, how the wheel of the year fits together, and it intersects with but is not dependent on our individual experiences of the seasons.

Ælfric asks, Hwa herað genihtsumlice ealra tida ymbhwyrft? 'Who may sufficiently praise the course of all seasons?' Maybe no one can - but it's fun to watch poets try. In the poem Maxims II, all four seasons are pithily characterised with one superlative each:

These might sound like obvious statements, but they're not quite as straightforward as they seem. It's true to say that 'winter is coldest', but do we say that because winter is the coldest season, or because we call the coldest season 'winter'? There may be years when spring is colder than winter - does that change the truth of the statement? What is the essential quality of the season; what makes it what it is? When I last posted this extract back in the spring, it received a number of comments about how spring couldn't begin in February, because it was still snowing in some places - a joke which reveals a less ordered way of thinking about the seasons, an unexamined assumption, perhaps, that they change from year to year depending on what the weather happens to be like. But this poem leaves nothing unexamined. Like the Menologium, it suggests to us that whatever our experience of a season may be in any particular year, it doesn't change what it actually is. And the lines which follow hint at the benefits this kind of mindful observation can bring:

Truth is most treacherous, treasure is dearest,
gold to every man, and an old man is most wise,
made wise with years gone by, he who has experienced much.
Sorrow is wondrously clinging. Clouds glide.

Truth is certainly treacherous in this poem - tricksy, at least, apparently simple but actually difficult to pin down. The statement about treasure and gold could be taken literally ('treasure is the most precious thing') but is perhaps better understood metaphorically, considering that the next statement is about wisdom and wisdom is often compared to treasure. 'An old man is most wise, made wise with years gone by'. Years pass, like clouds across the sky. What does their revolving course leave with the human observer? Sorrow, perhaps, but wisdom too. And wisdom can make your mind bright as the summer sun, as this passage from the Alfredian Metres of Boethius promises:

He who wishes to search in an ordered way
for the right, inwardly,
so deeply that no man may drive it out,
nor any earthly thing at all
corrupt it, he shall first
seek within himself that which for a time
he had once sought outside himself...
He will then perceive
all the harmful and useless things which he had long kept
within his inner chamber,
just as clearly as he may look upon the sun
with his present eyes;
and he will also perceive his inner thought,
lighter and brighter than the radiance
of the sun in summer, when the jewel of the sky,
serene star of the heavens, shines most brightly.
Posted by Clerk of Oxford at 9:27 am