'I, who will already be dust by your time, have made mention of you in this book'

Henry I and Matilda, in a 14th-century genealogical roll (BL Royal MS. 14 B VI)

My latest column for History Today can be read online here. It was prompted by recent news about archaeological investigations at the site of Reading Abbey, which may result (among other things) in finding the tomb of Henry I.

I was interested to hear about this, partly because I explored Reading properly for the first time last year and was very struck by how the medieval and modern sit side-by-side in the town. The date of Henry I's death, 1135, also gave me a good excuse to quote a justly famous passage from Henry of Huntingdon's Historia Anglorum:

This, then, is the year from which the writer of the History wished his age to be reckoned by posterity... this computation will show what point in Time we have reached. Already one millennium has passed since the Lord's incarnation. We are leading our lives, or - to put it more accurately - we are holding back death, in what is the 135th year of the second millennium.

I often think of that opening: Hic est annus qui comprehendit scriptorem, 'This is the year which holds the writer'. While the present year may enclose the historian's body, it can't limit his imagination; and so Henry casts his thoughts a thousand years backwards and forwards from his own time:

Let us, however, think about what has become of those who lived in the first millennium around this time, around the 135th year. In those days, of course, Antoninus ruled Rome with his brother Lucius Aurelius, and Pius the Roman was pope. Lucius, who was of British birth, ruled this island, and not long after this time, while those emperors were still in power, he was the first of the British to become a Christian, and through him the whole of Britain was converted to faith in Christ. For this he is worthy of eternal record.

But who were the other people who lived throughout the countries of the world at that time? Let our present kings and dukes, tyrants and princes, church leaders and earls, commanders and governors, magistrates and sheriffs, warlike and strong men - let them tell me: who were in command and held office at that time? And you, admirable Bishop Alexander, to whom I have dedicated our history, tell me what you know of the bishops of that time.

I ask myself: tell me, Henry, author of this History, tell me, who were the archdeacons of that time? What does it matter whether they were individually noble or ignoble, renowned or unknown, praiseworthy or disreputable, exalted or cast down, wise or foolish? If any of them undertook some labour for the sake of praise and glory, when now no record of him survives any more than of his horse or his ass, why then did the wretch torment his spirit in vain? What benefit was it to them, who came to this?

Now I speak to you who will be living in the third millennium, around the 135th year. Consider us, who at this moment seem to be renowned, because, miserable creatures, we think highly of ourselves. Reflect, I say, on what has become of us. Tell me, I pray, what gain has it been to us to have been great or famous? We had no fame at all, except in God. For if we are famed now in Him, we shall still be famed in your time, as lords of heaven and earth, worthy of praise with our Lord God, by the thousands of thousands who are in the heavens. I, who will already be dust by your time, have made mention of you in this book, so long before you are to be born, so that if - as my soul strongly desires - it shall come about that this book comes into your hands, I beg you, in the incomprehensible mercy of God, to pray for me, poor wretch. In the same way, may those who will walk with God in the fourth and fifth millennia pray and petition for you, if indeed mortal man survives so long.

Henry I, our historian's namesake and one of his fixed points of temporal reference here, died on 1 December 1135. He was buried at Reading Abbey, which he had founded, and which subsequently became one of the richest and most powerful religious houses in the country. After a later King Henry wrought his usual destruction, the abbey church was largely demolished, the royal founder's tomb was lost, and the remaining buildings of the extensive site fell into ruins. You can read more about the current state of the ruins and future plans for them at this site.

I have to confess that despite living not far from Reading, until last year I'd never really considered it somewhere worth visiting from a historical point of view - I'm afraid if I thought of it at all, it was probably as a place to change trains! But I was wrong: it has some very interesting features, despite its overly present major roads and rather bleak modern town centre. For one thing, it has an excellent museum, which devotes plenty of space to the story of medieval Reading and the relics of the abbey (and the later history of the area too, of course). It has on display some fantastic carved stones from the abbey, including this, which is said to be the earliest surviving depiction of the Coronation of the Virgin Mary: 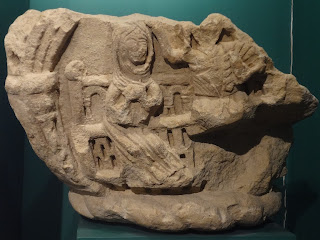 It dates to the early part of the twelfth century, the time of the abbey's foundation, and in context has fascinating significance in light of Reading's royal connections (on which see this article). The museum's other treasures include a full-size (!) replica of the Bayeux Tapestry, made in 1885 by the ladies of the Leek Embroidery Society. You can read about its story here - it's a quirky but wonderful tribute to Victorian medievalism, and well worth celebrating in the year which holds us, the 950th anniversary of 1066.

Walking around the abbey site itself, it's possible to get a very striking sense of the space occupied by the abbey and its environs. Part of the outer court of the abbey is still (as it would have been in the Middle Ages) a public space, now a park overlooked by office buildings: 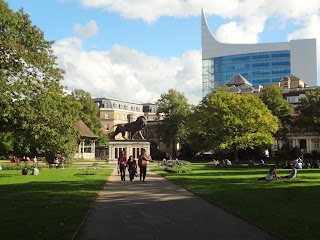 (That one's called the Blade. It's Reading's most noticeable feature if you pass through on the train...) 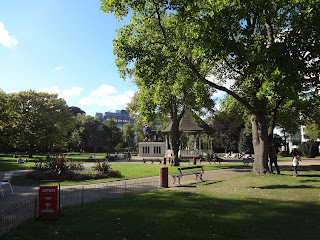 One corner of the park is occupied by the little Victorian church of St James, which was designed by A. W. N. Pugin and built in 1837-40. Its buildings overlap with the site of the abbey church, which would have been more than three times the size of this building. 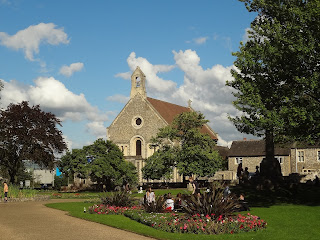 The dedication reflects a link with the medieval abbey: Reading Abbey possessed the hand of St James, an important relic and a great attraction to pilgrims. St James' claims to be the only Catholic church in England to stand on the site of a pre-Reformation abbey. 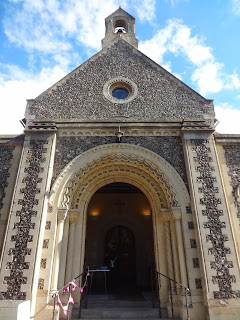 Just next door, as it were, are the standing ruins of the abbey. They were closed to the public when I was there (for safety reasons; you can take a tour, though). 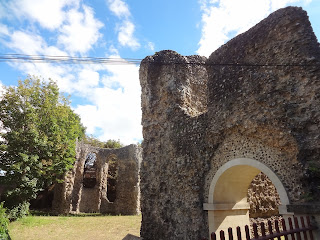 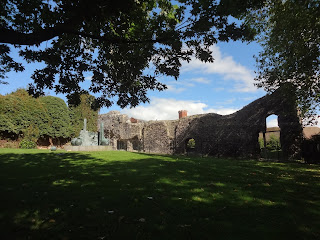 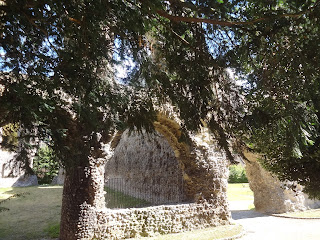 There are parts remaining of the chapter house and the cloister, where we might imagine the monks humming 'Summer is icumen in... 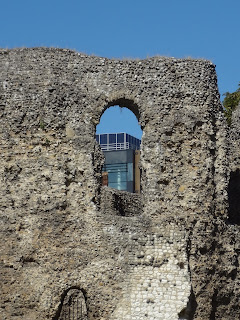 There's also the abbey gatehouse, where Jane Austen was briefly at school: 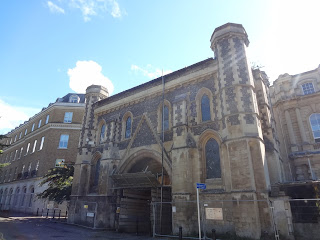 Behind the gatehouse, still within the former precincts of the abbey, the scene quickly gets less picturesque: office buildings, chain restaurants, Reading Crown Court. Hidden among them is the abbey's mill stream, and a few fragments of older buildings. 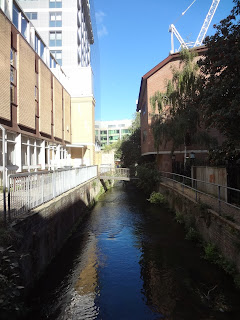 This is a bit of the old abbey mill, stranded among skyscrapers. 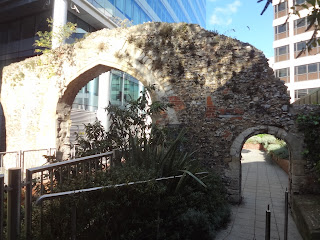 It stands right at the foot of the Blade - as sharp a juxtaposition of old and new as you could ever wish to see. 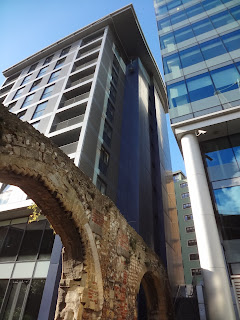 I was there on a Saturday afternoon, so these buildings were all empty and a little bit ghostly; it was a relief to get away from that glaring glass, back to the ruins and the nearby river. The riverside walk is now a memorial to Oscar Wilde, whose Reading Gaol stood next to the ruins of the abbey. 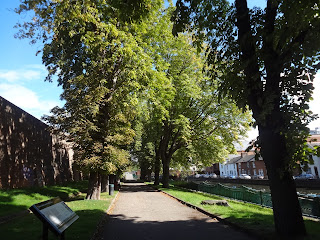 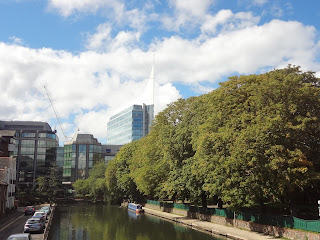 Away from the abbey itself, Reading is well-provided with churches. I visited the town during the Heritage Open Days weekend, so they were all open and very friendly and welcoming (that's next week this year, should you wish to repeat my experience!). 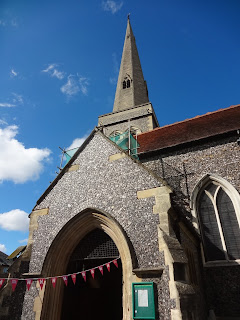 This is the church of St Giles, whose vicar was killed alongside the last Abbot of Reading, Hugh Faringdon, before the abbey gatehouse in 1539. The present-day church commemorates him as a martyr. 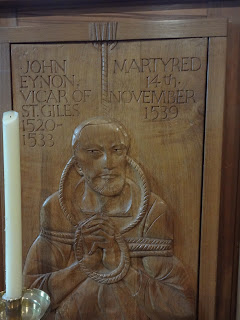 In the centre of town is St Mary's, which they call Reading Minster. The church guide says 'Tradition has it that St Birinus founded a small chapel on the site of St Mary's church in the 7th century', which would make it one of the oldest churches in the area. Tradition also says that a nunnery was founded here by Queen Ælfthryth, wife of King Edgar, in penance for her involvement in the murder of her stepson, young Edward the Martyr. Ælfthryth was a patron of several religious communities for women (whether in penance or not it's not easy to say), and this takes Reading's royal connections back another 150 years or so before Henry I. 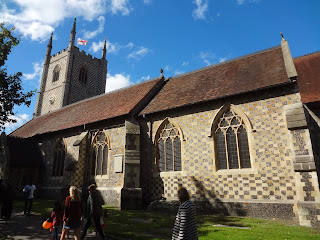 St Mary's inherited various furnishings from the abbey after it was closed, including doorways, pillars, and roof timbers. It also has a gorgeous checkerboard tower: 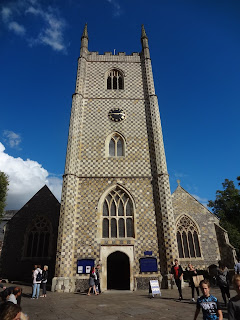 It's right in the middle of town, and the doors were flung wide open, so that passers-by were freely wandering in and out. Both these churches (and St James' too) felt loved and cared-for, in their different ways, and very much alive - one had a wedding going on, another had many little candles flickering before a series of shrines, another a small group praying quietly together. It really is remarkable to think about such things going on in these places, century after century, as royal abbeys and empires rise and fall. 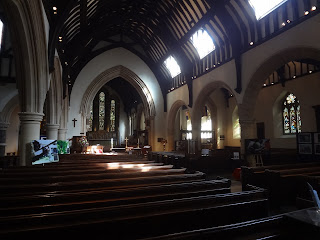