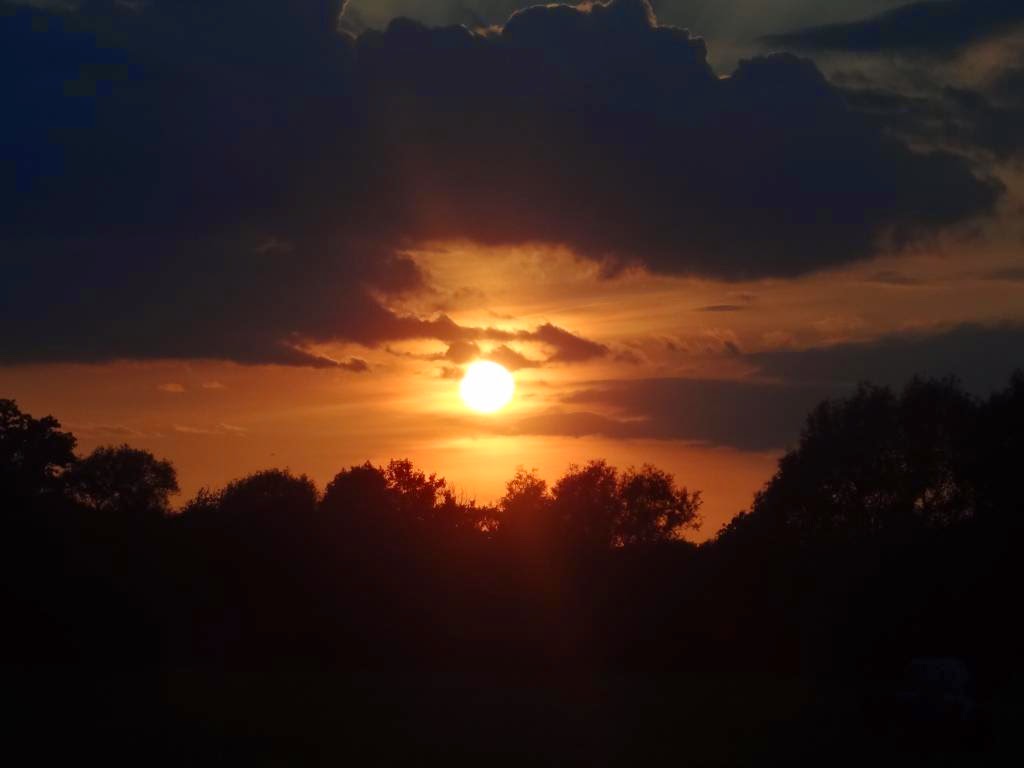 The sun on Midsummer Eve

On 20 June is the sunstead, which in Latin is called solstice and in English midsummer.

Today is the summer solstice, which in Old English - as the quotation above from Byrhtferth tells us - was called either midsummer or sunstede - stede meaning something like 'fixed place, point of standing still'. (It's the same element stead as in homestead, or Hampstead). Since this year I've been blogging on and off about Anglo-Saxon seasons, from autumn to Advent to spring, I thought today I'd post two Old English descriptions of the summer solstice.

The first comes from the Menologium, a poem composed probably in the second half of the tenth century. The Menologium catalogues the cycle of the year and the saints' feasts which occur in each month, but it's much more than just a functional list; it combines useful knowledge and Christian learning with the traditional images and language of Anglo-Saxon poetry. I translated part of the section about May, full of flowering meadows and noisy birds, in this post. The section quoted below (lines 106-119) describes the month of June - ærra Liða is the Old English name - as far as June 24th, the feast of John the Baptist and the traditional date of Midsummer Day. It follows on from the section on May - naturally! - and so begins by dating the first of June as the sixth day after the feast of St Augustine of Canterbury, May 26th.

Then after two and four long days
the month brings ærra Liða to town for us,
June into the dwellings, in which the jewel climbs up
highest in the year into the heavens,
brightest of stars, and descends from its place,
sinking to its setting. It likes then
to gaze longer upon the earth, the fairest of lights
to move more slowly across the fields of the world,
the created globe. Then after thirteen and ten nights [i.e. on 24th June]
the thegn of glory, the Prince's darling,
John, was born in days of old;
we keep that feast at Midsummer, with great honour.

This is just beautiful. We don't get a word for the solstice here but that's clearly what's being described: the sun climbs to its highest point in the year (hyhst on geare) and from that station (till) sinks again to its setting. gim, 'gem, jewel' is a common poetic name for the sun in Old English - in other poems it is called gimma gladost 'loveliest of jewels', heofenes gim 'the jewel of the heavens', wuldorgim 'glory-jewel'. Here the sun is personified; the verb wyle must imply desire on the part of the sun, who wants and likes 'to gaze longer upon the earth' (wyle... leng grund behealdan). It's almost as if the days are longer at the solstice because the sun is lingering above the earth, unwilling to depart, lovingly beholding the world and wanting to travel more slowly across the beautiful summer fields (gangan lator ofer foldan wang). 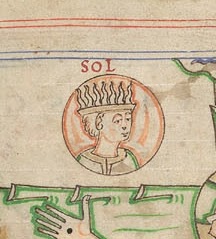 The Sun in an eleventh-century English manuscript (BL Arundel 60, f.12v)

A less poetic but no less interesting description of the solstice is provided by the tenth-century homilist Ælfric in his De Temporibus Anni, which you can read in translation online here. I'll only quote the bit which is relevant for today, but do go and read the whole thing: it's not very long, and it's fascinating to see how he describes the seasons of the year and the reckoning of time, the nature of the sun, moon and stars, and the operation of the winds and the weather. This text may be intended as a brief and accessible (and vernacular) introduction to the principles of medieval science and calendar-reckoning, based largely on Bede. Of the solstice Ælfric says:


[Four seasons are reckoned in a year, that is, Ver, Estas, Autumnus, Hiems. Ver is spring (lenctentid), which has an equinox; Estas is summer (sumor), which has a solstice; Autumn is autumn (hærfest), which has the other equinox; Hiems is winter (winter), which has the other solstice. In these four seasons the sun runs through various regions around the globe, and makes the earth temperate. Truly it is by God's providence that it does not always remain in one place and burn up the fruits of the earth with its heat; it moves through different places, and tempers the fruits of the earth both in growing and in ripening.

When the day grows longer, the sun goes northwards until it comes to the sign which is called Cancer. The summer solstice is there, because there it turns back again southwards, and then the day grows shorter until the sun comes again south to the winter solstice, and there stands still. When it is moving northwards, it makes the spring equinox in the middle of its course; and when it is moving south, it makes the autumnal equinox. The further south it goes, the closer winter is, and the winter chill follows after it. But when it turns again, then it drives away the winter chill with its hot rays.] 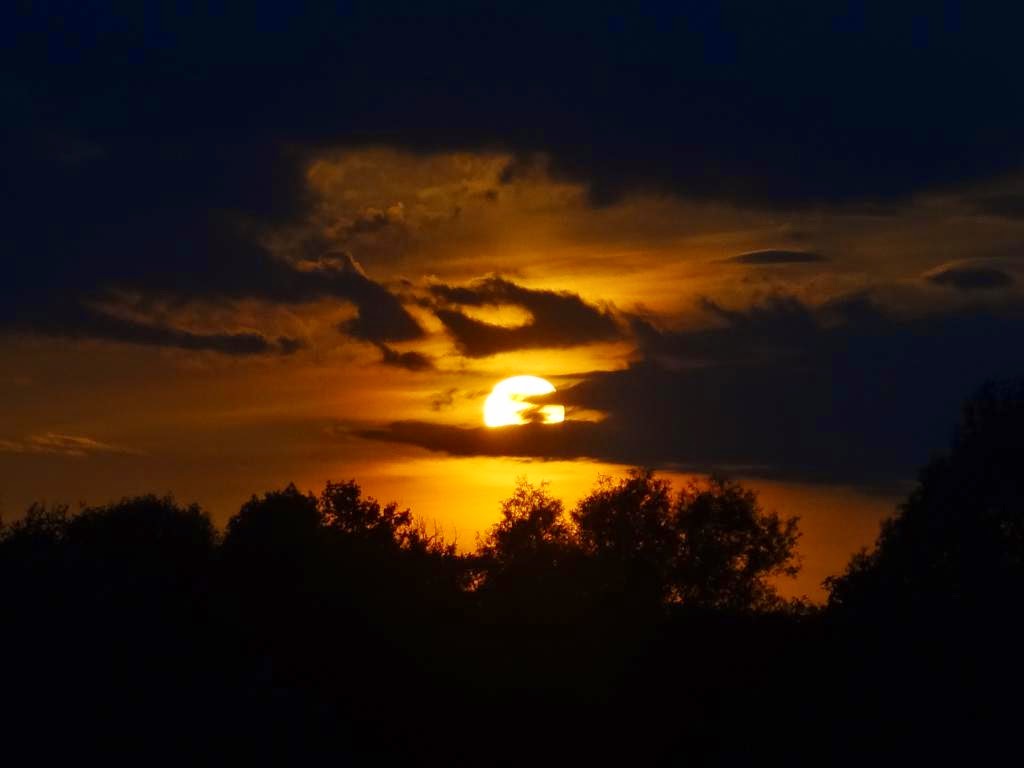 Later he explains how the solstice has different lengths in different parts of the world, from Italy to Iceland, and of England he says:


[In England the longest day has seventeen hours. In the northern part of that land, the nights in summer are as light as if it were day all night long, as we ourselves have very often seen.] 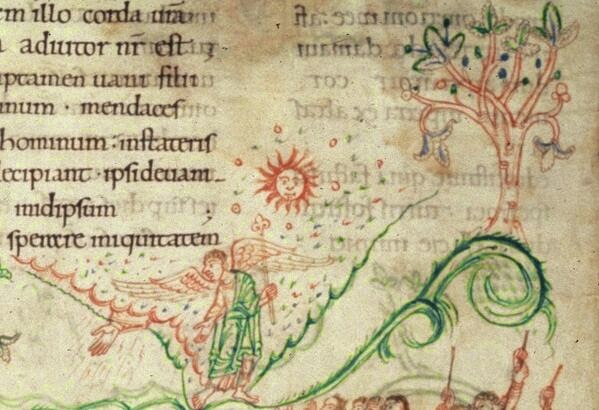 Related: Ælfric's description of the sun in his homily on Rogationtide, and 'O Earendel', the Old English version of the antiphon 'O Oriens', which falls on the winter solstice. The solstices and equinoxes were intimately connected with the medieval understanding of the church year: the spring equinox was crucial for the dating of Easter (as discussed here and here), and the solstices for celebrating the birth of Christ and of his herald, þeodnes dyrling, John the Baptist. Bede explains the symbolic relationship between the two solstices in his De temporum ratione:

I love your blog!

Glad to hear it!

The persistence of the clumsy Roman calendar well into the Midddle Ages never ceases to amaze me. It's just so much easier to say June 21 than 'the eleventh day before the Calends of July.' On the other hand, the understanding of the movements of the sun throughout the year combats the notion that the people of this era were ignorant of such things. No more than some are today, no doubt.

And I do wish we said 'sunstead.'

All this talk about the movements of the sun and sunsteads makes me think of Manhattanhenge. http://www.amnh.org/our-research/hayden-planetarium/resources/manhattanhenge

I love your blog too!