Christ the Bird and the Play of Hope: An Anglo-Saxon Ascension 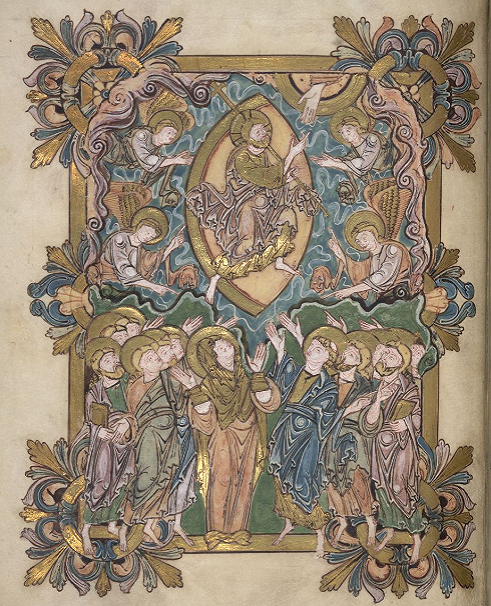 Last Advent I posted a series of extracts from the Old English poem known as Christ I, which is a poetic meditation on the 'O Antiphons' (the series begins here). The poem which follows Christ I in the manuscript is known, logically but unimaginatively, as Christ II, although the two poems were probably composed at different times and by different people (the second is signed by Cynewulf, one of the few Anglo-Saxon poets whose name we know). Christ II deals with the Ascension, and so it seems appropriate to post a few short extracts from it today. All three Christ poems can be read in Old English here; the following translations are mine.

One thing this poem does have in common with the 'Advent lyrics' of Christ I is that it's an extraordinarily sophisticated theological meditation on its Biblical theme, rendered in the traditional language of Anglo-Saxon poetry but drawing on learned interpretations of the subject by the Church Fathers. The poem begins by describing the delight of the angels at Christ's return to heaven, contrasting their joy with the grief of the disciples at parting from Christ, and giving his words of comfort to his followers:

“Rejoice in your hearts! I will never leave you;
I will always remain with you in love,
and give you strength and dwell with you
for ever and ever, so that through my grace
you will never want for anything good...
I will dwell with you
from henceforth as a comforter, and keep you in peace,
a steadfast strength in every place.”

Then all of a sudden we hear the noise of rejoicing in heaven - compare this to the busy Ascension scene depicted above in the Benedictional of St Æthelwold:

Then suddenly a loud clamour
was heard on high: a throng of heaven's angels,
a brightly shining band, heralds of glory,
came in a company. Our king passed
through the temple roof while they gazed,
they who remained behind the dear one still
in that meeting-place, the chosen thegns.
They saw the Lord ascend on high,
God's Son from the ground.
Their minds were sorrowful,
hot at heart, mourning in spirit,
because they would no longer see
the dear one beneath the heavens. The celestial heralds
raised up a song, praised the Prince,
extolled the Source of life, rejoiced in the light
which shone from the Saviour's head.
They saw two bright angels
beautifully gleaming with adornments around the First-begotten,
the glory of kings.

The angels speak to the disciples, explaining their joy at Christ's return and what it means for heaven and earth. But then the poem turns from narrative to reflection, following, in its most famous section, Gregory the Great's exposition in a homily on the Ascension of the 'leaps of Christ':

Hence it is that Solomon has put into the mouth of the Church the words: Behold, He cometh! leaping upon the mountains, skipping upon the hills.

These hills are his lofty and noble achievements. “Behold, He cometh leaping upon the mountains.”

When He came to redeem us, He came, if I may so say, in leaps. My dearly beloved brethren, would you know what His leaps were?

Lo, how the Truth made manifest in the Flesh did leap for our sakes, that He might draw us to run after Him for this end did He rejoice, as a strong man to run a race.

Therefore, dearly beloved brethren, it behoves us in heart and mind thither to ascend, where we believe Him to have already ascended bodily.


Christ is presented as a wheeling bird, moving with ease between the heavens and the earth:

So the beautiful bird ventured into flight.
Now he sought the home of the angels,
that glorious country, bold and strong in might;
now he swung back to earth again,
sought the ground by grace of the Spirit,
returned to the world. Of this the prophet sang:
“He was lifted up in the arms of angels
in the great abundance of his powers,
high and holy, above the glory of the heavens.”

This picture of Christ in movement, the embodiment of sheer unfettered energy, expands on Gregory's idea of the 'leaping' Christ, the lover of the Song of Songs, springing across the mountains to seek his beloved:

Of this sang Solomon son of David
in spiritual mysteries, wise in songs,
ruler of nations, and spoke these words:
“This shall be made known: that the King of angels,
the Lord mighty in strength, will come springing upon the mountain,
leaping the high uplands; hills and downs
he will garland with his glory, and redeem the world,
all earth's inhabitants, by that glorious leap.”

The first leap was when he descended into a woman,
an unblemished virgin, and there took human form
without sin; that became a comfort
to all earth's dwellers. The second bound
was the birth of the boy, when he was in the manger,
wrapped in cloth in the form of a child,
the glory of all glories. The third leap
was the heavenly King's rush when he climbed upon the cross,
Father, Comforting Spirit. The fourth bound
was into the tomb, when he relinquished the tree,
safe in the sepulchre. The fifth leap
when he humbled the host of hell's inhabitants
in living torment; the King bound within
the advocate of the fiends in fetters of fire,
the malignant one, where he still lies
fastened with chains in prison,
bound by sins. The sixth leap,
the Holy One's hope-play, when he ascended to heaven
into his former home. Then the throng of angels
in that holy tide was made merry with laughter,
rapt with joy. They saw the glory of majesty,
first of princes, seek out his homeland,
the bright mansions. After that the blessed city-dwellers
endlessly delighted in the Prince's play.

Thus here on earth God's eternal Son
sprang in leaps over the high hills,
bold across the mountains. So we men
should spring in leaps in the thoughts of our hearts
from strength to strength, striving after glory,
that we may ascend to that highest heaven
by holy deeds, where there is joy and bliss,
a distinguished company of thegns. It is greatly fitting for us
that we seek salvation with our hearts
where we eagerly believe with our spirits
that the Saving Son will ascend from here
with our bodies, the living God.
And so we should always shun idle desires,
the wounds of sin, and delight in what is better.
We have as a comfort to us a Father in the heavens,
the Almighty. From there he sends
his messengers here, holy from the heights,
to shield us from our enemies'
terrible arrows, lest the hostile ones
wound us, when the lord of sin
sends among the people of God
a bitter shot from his deceitful bow.

This Christ is dynamic, full of joy and energy: everything that happens in his life is propelled by his triumphant vigour, even his 'rush' (ræs) towards the cross and the moment he chooses to relinquish it (þa he þone beam ofgeaf). His Ascension is not a passive lifting-up into heaven but an active bound towards his homeland (again, compare the Christ of the Benedictional of St Æthelwold; he's definitely leaping into heaven!). His leaps are called plega, 'play', movement as swift and natural as the play of fire or light, and the Ascension is hyhtplega, a beautiful compound: hyht is both 'hope' and 'joy', so this is 'a play of hope', 'an action which brings joy' to us and to the laughing angels, who spend eternity delighting in the 'Prince's play' (æþelinges plega). 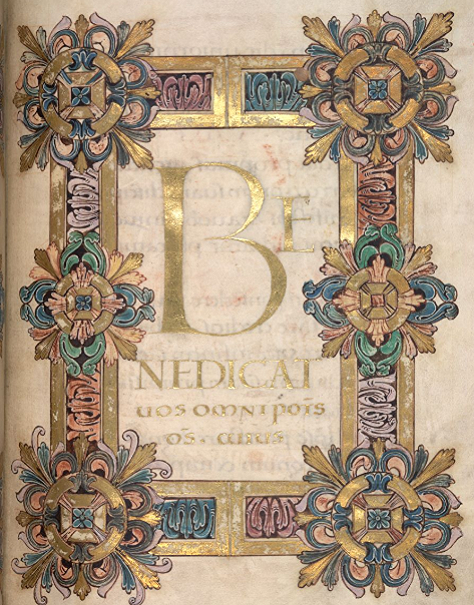 The final section of the poem moves on to the subject of Judgement Day and what we should do to prepare for it. The closing lines are exquisite:

Now it is very much like this: as if we were sailing
in ships across cold water, over the sea-waves,
beyond the wide ocean in water-steeds
traversing the floods. The waters are perilous,
the waves immeasurable, amid which we journey here
through this frail world, the stormy oceans,
across the paths of the deep. Dangerous was that life
before we came to land
across the rough waves. Help came to us
that we might be led to a haven of healing,
God's Spirit-Son, and gave us grace
that we might find, by the ship's side,
where we could moor our water-steeds,
our ancient wave-horses securely anchored.
Let us fasten our hope on that haven
which the Ruler of the skies opened for us,
holy in the heights, when he ascended into heaven. 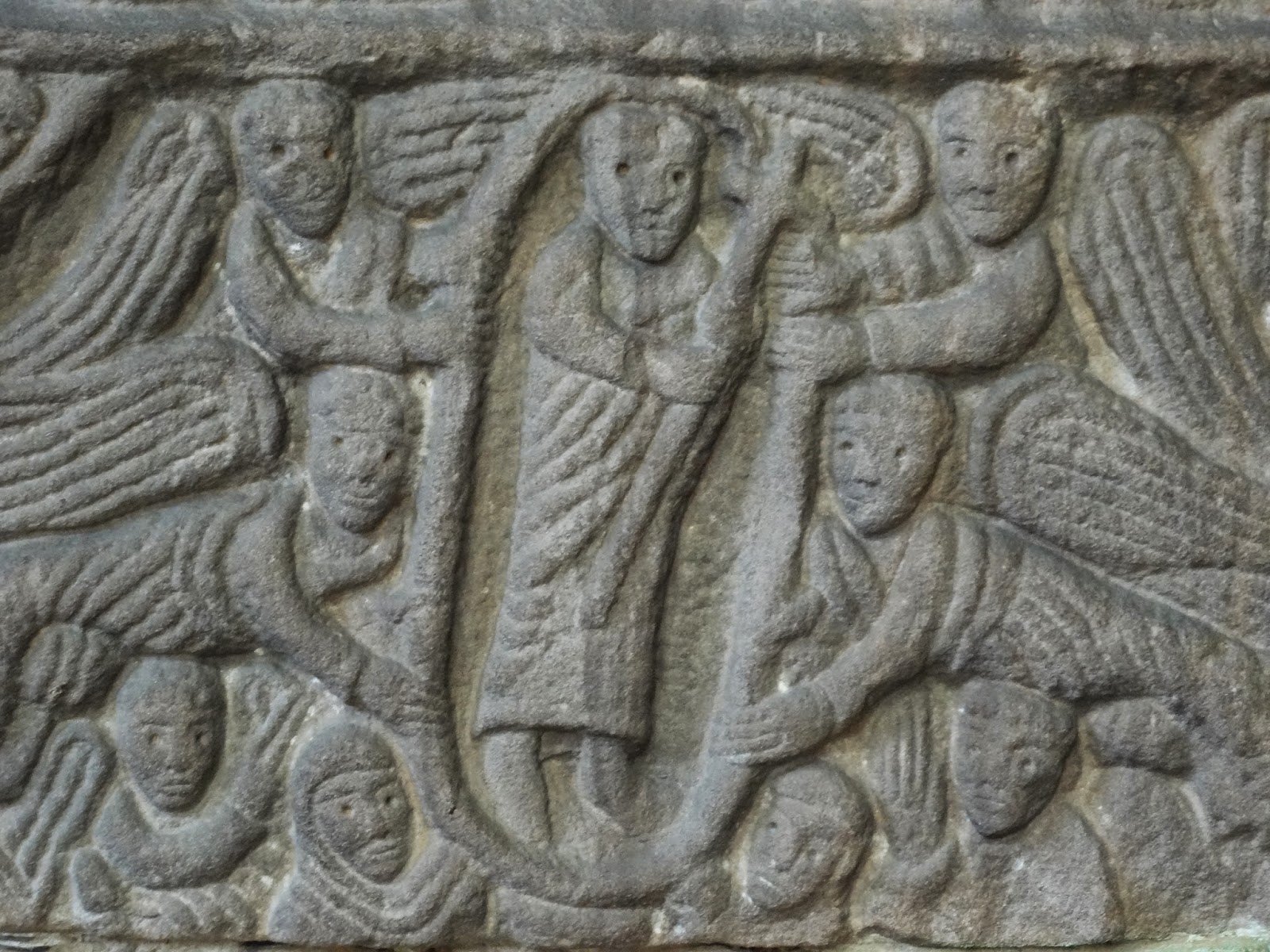 Christ's Ascension on the Wirksworth Stone
Posted by Clerk of Oxford at 10:48 am