Since it's now the vacation, and I'm alone in Oxford with nothing to do except work on my thesis (which is quite a big 'nothing'), I've been reading a lot of poetry. It's still procrastination, but it feels healthier than skimming the internet! And it leads to finding gems like this, by Robert Louis Stevenson:


Lo! In thine honest eyes I read
The auspicious beacon that shall lead,
After long sailing in deep seas,
To quiet havens in June ease.

Thy voice sings like an inland bird
First by the seaworn sailor heard;
And like road sheltered from life's sea
Thine honest heart is unto me.

Posted by Clerk of Oxford at 9:51 pm No comments:

Is it the hour? We leave this resting-place
Made fair by one another for a while.
Now, for a god-speed, one last mad embrace;
The long road then, unlit by your faint smile.
Ah! the long road! and you so far away!
Oh, I'll remember! but . . . each crawling day
Will pale a little your scarlet lips, each mile
Dull the dear pain of your remembered face.

. . . Do you think there's a far border town, somewhere,
The desert's edge, last of the lands we know,
Some gaunt eventual limit of our light,
In which I'll find you waiting; and we'll go
Together, hand in hand again, out there,
Into the waste we know not, into the night?
Posted by Clerk of Oxford at 9:47 pm No comments:

... is the day for roses. They say that if you pick a rose on Midsummer Eve or Midsummer Day, it will last until Christmas; and if you scatter rose-petals before you at midnight, you will meet your future husband the next day. There are roses in a vase by my bed as I sit and write this, and I think they know what day it is, because they're sending forth more scent than they were last night. At midnight, I might pick a few petals...
Posted by Clerk of Oxford at 11:07 pm 2 comments:

Sunset over the Isis 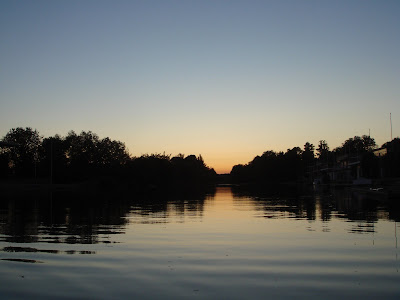 Taken from a punt.
Posted by Clerk of Oxford at 6:46 pm No comments:

Email ThisBlogThis!Share to TwitterShare to FacebookShare to Pinterest
Labels: Oxford

As Little as a Leaf

I don't think I've ever posted anything in Old Norse here before, which is a great oversight. In fact I don't read Norse as regularly as I'd like to (or as I probably should...), but something reminded me of a particular poem the other day, and today I remembered to look it up! It's from the Poetic Edda, the assortment of poems on mythological and heroic subjects which provides most of our oldest information about Norse legends. This poem, Guðrúnarkviða I, tells how Guðrún is persuaded to mourn her husband Sigurðr, who has been murdered by her brothers. Psychologically it's pretty interesting: she can't weep for him, and her companions are afraid that she will become ill if she is unable to express her grief. They tell sad stories of their own lives to try and get her to weep, but she cannot (other poems show Guðrún to be incredibly strong-minded; she kills her own children to get revenge on another husband). At last her sister pulls the covering away from Sigurðr's body, and Guðrún sees his wounds, his hair streaming with blood, his eyes grown dim - and at last she can weep. She kneels by his body and her tears run into her loosened hair; she cries so loudly that her geese cackle in response from the meadow. Then she speaks a lament for Sigurðr:

I'm basically posting this here to spare my facebook friends the burden of my whining. It's one of those poems that gets stuck in my head when I don't want it to, especially the last verse: "dear as remembered kisses after death..."
It's the end of the academic year, and I think I'm mourning a little for what has happened and what hasn't. Well, at least I didn't do it on facebook.


Tears, idle tears, I know not what they mean,
Tears from the depth of some divine despair
Rise in the heart, and gather to the eyes,
In looking on the happy Autumn-fields,
And thinking of the days that are no more.

Fresh as the first beam glittering on a sail,
That brings our friends up from the underworld,
Sad as the last which reddens over one
That sinks with all we love below the verge;
So sad, so fresh, the days that are no more.

Ah, sad and strange as in dark summer dawns
The earliest pipe of half-awakened birds
To dying ears, when unto dying eyes
The casement slowly grows a glimmering square;
So sad, so strange, the days that are no more.

Dear as remembered kisses after death,
And sweet as those by hopeless fancy feigned
On lips that are for others; deep as love,
Deep as first love, and wild with all regret;
O Death in Life, the days that are no more.

Alfred Tennyson
Posted by Clerk of Oxford at 4:53 pm 1 comment:

I came home from the college bar last night, the last night of term, and found myself sitting up until 2 in the morning reading John Donne's sermons. That's a normal thing to do, right? Besides this Christmas sermon, which I like to read at all times and seasons, this famous Meditation means a lot to me right now:

Perchance he for whom this bell tolls may be so ill, as that he knows not it tolls for him; and perchance I may think myself so much better than I am, as that they who are about me, and see my state, may have caused it to toll for me, and I know not that. The church is Catholic, universal, so are all her actions; all that she does belongs to all. When she baptizes a child, that action concerns me; for that child is thereby connected to that body which is my head too, and ingrafted into that body whereof I am a member. And when she buries a man, that action concerns me: all mankind is of one author, and is one volume; when one man dies, one chapter is not torn out of the book, but translated into a better language; and every chapter must be so translated; God employs several translators; some pieces are translated by age, some by sickness, some by war, some by justice; but God's hand is in every translation, and his hand shall bind up all our scattered leaves again for that library where every book shall lie open to one another. As therefore the bell that rings to a sermon calls not upon the preacher only, but upon the congregation to come, so this bell calls us all; but how much more me, who am brought so near the door by this sickness. There was a contention as far as a suit (in which both piety and dignity, religion and estimation, were mingled), which of the religious orders should ring to prayers first in the morning; and it was determined, that they should ring first that rose earliest. If we understand aright the dignity of this bell that tolls for our evening prayer, we would be glad to make it ours by rising early, in that application, that it might be ours as well as his, whose indeed it is. The bell doth toll for him that thinks it doth; and though it intermit again, yet from that minute that that occasion wrought upon him, he is united to God. Who casts not up his eye to the sun when it rises? but who takes off his eye from a comet when that breaks out? Who bends not his ear to any bell which upon any occasion rings? but who can remove it from that bell which is passing a piece of himself out of this world?

No man is an island, entire of itself; every man is a piece of the continent, a part of the main. If a clod be washed away by the sea, Europe is the less, as well as if a promontory were, as well as if a manor of thy friend's or of thine own were: any man's death diminishes me, because I am involved in mankind, and therefore never send to know for whom the bells tolls; it tolls for thee. Neither can we call this a begging of misery, or a borrowing of misery, as though we were not miserable enough of ourselves, but must fetch in more from the next house, in taking upon us the misery of our neighbours. Truly it were an excusable covetousness if we did, for affliction is a treasure, and scarce any man hath enough of it. No man hath affliction enough that is not matured and ripened by and made fit for God by that affliction. If a man carry treasure in bullion, or in a wedge of gold, and have none coined into current money, his treasure will not defray him as he travels. Tribulation is treasure in the nature of it, but it is not current money in the use of it, except we get nearer and nearer our home, heaven, by it. Another man may be sick too, and sick to death, and this affliction may lie in his bowels, as gold in a mine, and be of no use to him; but this bell, that tells me of his affliction, digs out and applies that gold to me: if by this consideration of another's danger I take mine own into contemplation, and so secure myself, by making my recourse to my God, who is our only security.
Posted by Clerk of Oxford at 10:40 am No comments:

For Thy gifts of grace,
Nature,
estate:

For forbearance,
Longsuffering,
long longsuffering towards me,
many times,
many years,
until now:

For all good offices I have received,
Good speed I have gotten:

For any good thing done:
For the use of things present,
thy promise
and my hope
touching the fruition of the good things to come:

For my parents honest and good,
Teachers gentle,
benefactors always to be had in remembrance,
colleagues likeminded,
hearers attentive,
friends sincere,
retainers faithful:

For all who have stood me in good stead
By their writings,
their sermons,
conversations,
prayers,
examples,
rebukes,
wrongs:

For these things and all other,
Which I wot of, which I wot not of,
open and secret,
things I remember, things I have forgotten withal,
things done to me after my will or yet against my will,

What thanks can I render to God again
For all the benefits that He hath done unto me?

Swiftly out from the friendly lilt of the band,
The crowd's good laughter, the loved eyes of men,
I am drawn nightward; I must turn again
Where, down beyond the low untrodden strand,
There curves and glimmers outward to the unknown
The old unquiet ocean. All the shade
Is rife with magic and movement. I stray alone
Here on the edge of silence, half afraid,

Waiting a sign. In the deep heart of me
The sullen waters swell towards the moon,
And all my tides set seaward. From inland
Leaps a gay fragment of some mocking tune,
That tinkles and laughs and fades along the sand,
And dies between the seawall and the sea.

Rupert Brooke
Posted by Clerk of Oxford at 3:01 pm No comments: