Perhaps it's a little late, but Christmas doesn't end on the 25th, you know. In the true medieval spirit of festival and octave, this is a Christmas post. And here's one of my favourite Christmas sermons:

John Donne's sermon at St Paul's for the evening of Christmas Day, 1624.

The air is not so full of motes, of atoms, as the Church is of mercies; and as we can suck in no part of air, but we take in those motes, those atoms; so here in the congregation we cannot suck in a word from the preacher, we cannot speak, we cannot sigh a prayer to God, but that whole breath and air is made of mercy. But we call not upon you from this text, to consider God's ordinary mercy, that which he exhibits to all in the ministry of his Church, nor his miraculous mercy, his extraordinary deliverances of states and churches; but we call upon particular consciences, by occasion of this text, to call to mind God's occasional mercies to them; such mercies as a regenerate man will call mercies, though a natural man would call them accidents, or occurrences, or contingencies.

A man wakes at midnight full of unclean thoughts, and he hears a passing Bell; this is an occasional mercy, if he call that his own knell, and consider how unfit he was to be called out of the world then, how unready to receive that voice, "Fool, this night they shall fetch away thy soul." The adulterer, whose eye waits for the twilight, goes forth, and casts his eyes upon forbidden houses, and would enter, and sees a Lord have mercy upon us upon the door; this is an occasional mercy, if this bring him to know that they who lie sick of the plague within, pass through a furnace, but by God's grace, to heaven; and he without, carries his own furnace to hell, his lustful loins to everlasting perdition. What an occasional mercy had Balaam, when his ass catechised him: What an occasional mercy had one thief, when the other catechised him so, "Art not thou afraid, being under the same condemnation?" What an occasional mercy had all they that saw that, when the Devil himself fought for the name of Jesus, and wounded the sons of Sceva for exorcising in the name of Jesus, with that indignation, with that increpation, "Jesus we know, and Paul we know, but who are ye?"

If I should declare what God hath done (done occasionally) for my soul, where he instructed me for fear of falling, where he raised me when I was fallen, perchance you would rather fix your thoughts upon my illnesses and wonder at that, than at God's goodness, and glorify him in that; rather wonder at my sins, than at his mercies, rather consider how ill a man I was, than how good a God he is. If I should inquire upon what occasion God elected me, and writ my name in the book of life, I should sooner be afraid that it were not so, than find a reason why it should be so. God made sun and moon to distinguish seasons, and day, and night, and we cannot have the fruits of the earth but in their seasons. But God hath made no decree to distinguish the seasons of his mercies. In paradise, the fruits were ripe the first minute, and in heaven it is always Autumn, his mercies are ever in their maturity. We ask panem quotidianum, our daily bread, and God never says you should have come yesterday, he never says you must again tomorrow, but today if you will hear his voice, today he will hear you.

If some king of the earth have so large an extent of dominion, in North, and South, as that he hath Winter and Summer together in his dominions, so large an extent East and West, as that he hath day and night together in his dominions, much more hath God mercy and judgment together: He brought light out of darkness, not out of a lesser light; he can bring thy Summer out of Winter, though thou have no Spring; though in the ways of fortune, or understanding, or conscience, thou have been benighted till now, wintred and frozen, clouded and eclipsed, damped and benumbed, smothered and stupefied till now - now God comes to thee, not as in the dawning of the day, not as in the bud of the spring, but as the Sun at noon to illustrate all shadows, as the sheaves in harvest, to fill all penuries. All occasions invite his mercies, and all times are his seasons.
Posted by Clerk of Oxford at 3:09 pm No comments:

As a lamentable result of the double darkness into which most Catholic musicians have been born - fear of Latin, and ignorance of the Propers of the Mass - many of them are entirely unable to explain why this, the Third Sunday in Advent, is called 'Gaudete Sunday'.

"Gaudete" means "Rejoice" - that's the sum of their knowledge. So they tend to plan music which involves the word "rejoice" in some way, the foolproof "word-association" method of liturgical planning which works all the rest of the year. Unfortunately, on Gaudete Sunday there is a pitfall which it is very easy to fall into:

That's Steeleye Span, singing the medieval carol 'Gaudete, Christus est natus'. Church musicians, fondly remembering the Steeleye Span phase of their 1960s youth (and there's nothing wrong with that, I like Steeleye Span myself... outside church), jump on this carol as the perfect thing to sing on Gaudete Sunday.

So do you see the pitfall, right there in the title? Indeed. It has "Gaudete" in there, which sounds right - but should we really be singing that "Christ is born" on the Third Sunday in Advent?

The name 'Gaudete Sunday', like many of the traditional names for Sundays in the Church's year, comes from the first words of the Introit:

"Rejoice in the Lord always; again I say, rejoice. Let your forbearance be known to all men; the Lord is at hand. Do not be anxious for anything, but in all manner of prayer, let your requests be made known unto God."

It's not difficult to see why this is more appropriate for Advent - 'the Lord is at hand!' - than a carol which rejoices in the birth of Christ. The reason this is so often forgotten is that most churches no longer sing the Introit. Which is a shame, because - listen to it!:

It goes against everything in me to be advising against the use of a medieval carol in any context, let alone discouraging the use of Latin in church, but nonetheless: 'Gaudete' is an inappropriate song to sing this Sunday. Don't do it. Save the carol, which is lovely, for Christmas, and do your bit to keep Advent as the distinctive season it really is.

Of one that is so fair and bright
Velut maris stella,
Brighter than the day is light,
Parens et puella:
I cry to thee, thou see to me;
Lady, pray thy Son for me
Tam pia,
That I may come to thee,
Maria!

All this world was forlore
Eva peccatrice,
Till our Lord was y-bore
De te genetrice.
With "Ave" it went away
Darkest night, and comes the day
Salutis;
The well springeth out of thee.
Virtutis.

On Jordan's bank the Baptist's cry
announces that the Lord is nigh;
awake and hearken, for he brings
glad tidings of the King of kings.

Then cleansed be every breast from sin;
make straight the way for God within,
prepare we in our hearts a home
where such a mighty Guest may come.

For thou art our salvation, Lord,
our refuge and our great reward;
without thy grace we waste away
like flowers that wither and decay.
Posted by Clerk of Oxford at 8:17 pm No comments:

Email ThisBlogThis!Share to TwitterShare to FacebookShare to Pinterest
Labels: Advent

Dwell in our hearts, O Savior blest;
so shall thine advent's dawn
'twixt us and thee, our bosom-guest,
be but the veil withdrawn.

Posted by Clerk of Oxford at 11:54 am No comments:

Of a rose, a lovely rose
Of a rose is all my song. 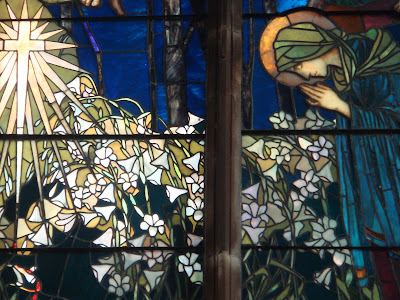 Listeneth, lordings, both elde and yinge,
How this rose began to springe;
Such a rose to my likinge
In all this world know I never none.

The angel came from heaven's tower
To greet Mary with great honour,
And said she should bear the flower
That should break the fiend's bond.

The flower sprung in high Bethlem,
That is both bright and schene.
The rose is Mary, heaven's queen;
Out of her bosom the blossom sprung.
Posted by Clerk of Oxford at 8:54 pm No comments:

There is a flower sprung of a tree
The root therof is called Jesse;
A flower of price,
There is none such in Paradise. 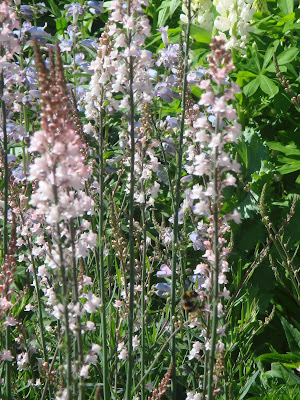 This flower is fair and fresh of hue,
It fades never, but ever is new;
The blissful branch this flower on grew
Was Mary mild that bare Jesu.
A flower of grace,
Against all sorrow it is solace.

The seed thereof was Goddes sond,*
That God himself sowed with his hand
In Bethlem in that holy land.
Amidst her herbere there he her fond.*
This blissful flower
Sprang never but in Mary's bower.

When Gabriel this maid met
With Ave Maria he her gret
Between them two this flower was set,
And kept was, no man should wit;
But on a day
In Bethlem it con spread and spray.*


* of God's sending
* in her garden there he found her
* began to bloom
Posted by Clerk of Oxford at 7:57 pm No comments: 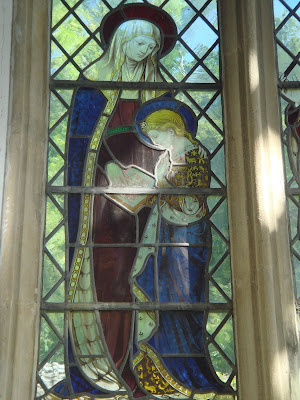 Myn herte of deedes was fordred
For synne that I have my flesh fed
And followed all my tyme,
I know not whither I shall be led
When I lye on deathes bed
In joy or into pyne.
On a lady myn hope is,
Mother and virgin;
We shall in to heaven's bliss
Through her medicine.

Better is her medicine
Than any mead or any wine
Her herbs smelleth sweet.
From Caithness into Dublin
Is there no leech so fine
Our sorrows to bete.
Posted by Clerk of Oxford at 2:05 pm No comments:

Advent, 2: The knot was knit 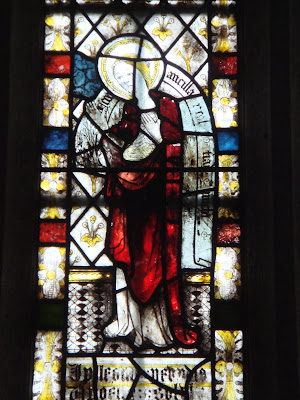 When tho angell was vanesched awey,
Sche stode al in hur thoght,
And to herself sche can sey,
'All God's will schall be wroght;
For he is well of all witte,
As witnesses well his story.'
At that word knot was knitte:
'Ecce ancilla domini'.
Posted by Clerk of Oxford at 8:34 pm No comments: 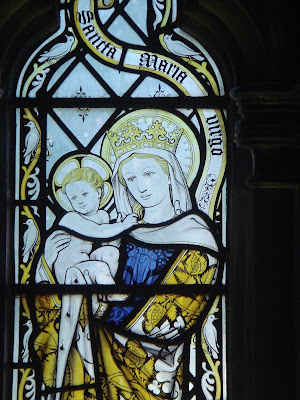 There is no rose of such vertu
As is the rose that bare Jesu.
Alleluia.

For in this rose contained was
Heaven and earth in little space
Res miranda.

By that rose we may well see
There be one God in persons three,
Pares forma.

The angels sungen the shepherds to
Gloria in excelsis deo.
Gaudeamus.

Leave we all this worldly mirth
And follow we this joyful birth.
Transeamus.
Posted by Clerk of Oxford at 10:05 pm No comments: