This is a repost from last year - since I recently honoured an Icelandic saint and a Danish one, it's time for a Norwegian to get some credit! 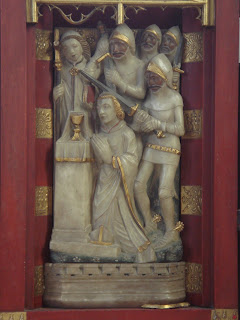 So, who knows anything interesting about the Norwegian archbishop St Eysteinn, whose feast day is today? I do! 'Interesting' is relative, I suppose. But anyway, it's more interesting than anything in that wikipedia article.

My interesting fact is that Eysteinn was one of Thomas Becket's earliest fans - everyone was a fan of Thomas Becket in the 1180s, but Eysteinn took it pretty far. He was Archbishop of Nidaros from 1161, and he corresponded with Becket while the latter was Archbishop of Canterbury. Thomas Becket wrote a lot of letters - he corresponded with everybody! - but there have always been strong links between the English and Norwegian churches, and Becket's murder in 1170 made almost as big an impression in Scandinavia as it did in England. Eysteinn was Archbishop at a period of civil war in Norway, and his support for King Magnus against the rival Sverri brought him into trouble. After a number of battles, Magnus was driven out of the country in 1180, and Eysteinn had to flee to England (excommunicating Sverri as he did so).

He stayed in England for three years. We don't know exactly where he was all that time, but he spent nine months staying in the monastery of Bury St. Edmunds, from 9 August 1181 onwards - his stay is recorded by the chronicler of that house, Jocelin of Brakelond, who was a monk there during Eysteinn's visit. He probably went to Canterbury too, to visit the shrine of Thomas Becket, and most likely he also visited Henry II - who was probably in the mood to be nice to persecuted archbishops, and gave him support out of the royal coffers.

The parallel between Becket, who had spent time in exile from England because of his disputes with Henry, and Archbishop Eysteinn was pretty obvious. The English chronicler William of Newburgh (in Yorkshire) says that Sverri, "having abjured the sacred order, and taken in marriage the daughter of the Gaut-king, wished to be solemnly crowned by the archbishop. But he, since he was a great man and not to be induced by prayers or threats to pour sacred ointment on an execrable head, was driven by Sverri from his fatherland." The English chroniclers had presumably got this information from Eysteinn himself (though one hopes he didn't describe himself as a 'great man'!). It was not Eysteinn's fate to be murdered at his own altar, though; he returned to Norway in 1183, was eventually reconciled with Sverri, and died peacefully enough in 1188. 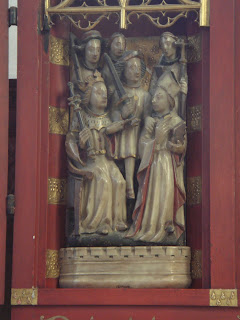 These pictures show two scenes from the life of Thomas Becket, from a medieval alabaster altarpiece at Elham, Kent (the top one a modern recreation). Eysteinn would have appreciated them.
Posted by Clerk of Oxford at 9:20 pm