St Canute: England and Denmark in the Days Before TV 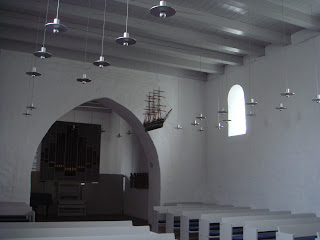 Danish chic at Jelling, in the church founded by St Cnut's
great-great-grandfather Harald Bluetooth in 965


Denmark is cool these days. With the arrival of the political drama Borgen on British TV (it's the West Wing! But in Danish!), various articles have pondered why Denmark is so appealing to English viewers - and the answer, according to the Guardian, is because love of Scandinavia is "a pretty good bellwether for British middle-class homebound taste". Well, no one knows more about the middle class than the Guardian, so we must accept this judgement.

The basis for this theory, reasonably enough for a TV review, goes back only as far as World War II, but England and Denmark have a long, pre-television history which is sort of my specialist subject (well, it's meant to be). Today is the feast-day of Cnut IV, Denmark's first canonised saint, who helps to exemplify it.

Cnut was the great-nephew of his namesake Cnut the Awesome - er, I mean, Cnut the Great, who united England and Denmark (and Norway and Sweden and Scotland, sort of) in a single North Sea Empire, under his rule, from 1018-1035. Sadly this empire didn't survive his death and the general rubbishness of his sons, and by the accession of Edward the Confessor, only seven years after Cnut's death, England and Denmark were severed once more.

That didn't stop the Danish kings, first Cnut's nephew Svein Estrithson and then his many sons, from taking an interest in the English throne, and hoping they might get it back again. Svein apparently declined the opportunity to invade England in 1066, unlike just about every other king in Northern Europe; but in 1069, when the rule of William the Conqueror was looking distinctly unstable, Svein sent his brother and three of his sons, including the future saint Cnut, on an exploratory raid on the east coast of England. They joined up with English rebels led by Waltheof and occupied York for several days; if they'd held out a bit longer they might have triumphed, and the Norman Conquest would have been only a three-year blip in English history.

But the loose coalition between them fell apart (as Borgen shows us coalitions are wont to do) and the Danes sailed away again, pausing only to accept some of the spoils of Peterborough Abbey as plundered by Hereward the Wake. I didn't say they were the good guys. Svein's sons had another go at teaming up with Waltheof in 1075, but it didn't work any better (some stories say William the Conqueror bribed Svein's brother to stay away, infuriating the Danish king. Maybe he promised to build him a motorway.)

Anyway, time passed, Svein died, his son Harald took the throne, Harald died, and then Cnut became king in 1080. His time was occupied by various rebellions, but he didn't lose interest in England: in 1085 he gathered a fleet to invade, which apparently worried William the Conqueror quite a bit, but a threat from Germany distracted Cnut's attention and the fleet never set sail.

The following year, Cnut was murdered during an uprising while taking refuge in a church. Like many kings killed in such a way, he was soon considered a martyr and a saint. By 1101 he had been officially canonised - fast work for those days! (It took Wulfstan of Worcester, today's other saint, more than a hundred years. In the process, Cnut's name was transformed into Canute because of the Pope's inability to pronounce the one-syllable version - a problem we all sympathise with...)

I said Cnut hadn't lost interest in England - and England hadn't lost interest in him. From its early days the veneration of him as a saint was supported by English monks, mostly from the abbey of Evesham in Worcestershire. The priory at Odense, where Cnut was killed, had been founded by English monks and dedicated to St Alban, and throughout the twelfth century it remained in close communication with both Evesham and St Mary's in York (which had been founded by a Dane, Earl Siward of Northumbria, in 1055).

A twelfth-century document says that at that time any Evesham monk was allowed to live at Odense for as long as he wished, and vice versa. We can name at least one man who did so: the first person to write a Life of St Cnut was an Englishman named Ælnoth, a monk educated at Canterbury, who had lived in Denmark for twenty-four years when he wrote his Vita.

So it happened in Denmark that the Danes, who have always been considered the most trustworthy of people, turned to the greatest betrayal and the worst treachery which could be: they chose and accepted Cnut as king and swore oaths to him, and afterwards they shamefully slew him in a church.


You might wonder why a Peterborough monk of the late eleventh century, after three hundred years of Viking attacks, would think of the Danes as 'the most trustworthy of people'. There's a long answer to that question involving settlement patterns and trading routes and Beowulf and the development of national and regional identity in England; but let's go for the short answer: Denmark is cool.
Posted by Clerk of Oxford at 12:01 pm

I enjoyed reading this. Cnut is one of the more appealing of the Danes in my series of novels, 'The Lost King' so I'm glad to find this.

I'm pleased to hear it - this is such an interesting period of English history!