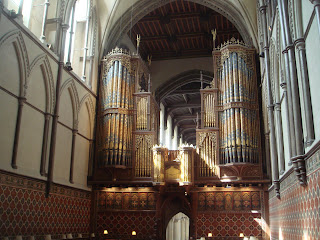 After seeing the BBC's new adaptation of 'The Mystery of Edwin Drood' (which I loved), I got to thinking about Rochester, the town on which the novel's 'Cloisterham' is based (Cloisterham, indeed! Dickens, you weren't even trying with that name). It's an utterly delightful town with a superb cathedral - among Kent churches, Canterbury gets all the love around here, but Rochester is also very ancient and very interesting.

The cathedral is the second oldest in England, founded just seven years after Canterbury (in 604) by Justus, a member of St Augustine's mission. This means that most of its 'oldest' records are just pipped to the post by the senior cathedral. For instance, the school which was founded at the same time as the cathedral, for the education of boys to the clerical state, still exists and is an incredible 1400 years old. So it's the second oldest school in the country - after Canterbury, of course.

However, Rochester can claim to be the source of the only surviving copy (though a very late one) of the laws of King Ethelbert of Kent, which is the oldest law-code of any kind in any Germanic language. This means that the Rochester volume preserves a copy of the oldest known written text in the English language. 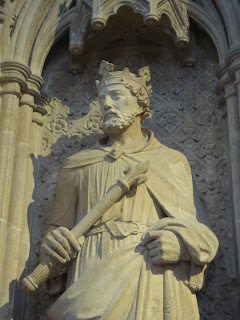 The later medieval history of Rochester is not quite as distinguished; William of Malmesbury visited it c.1125, as part of his information-gathering tour in the composition of his great history of the English bishops, and apologised for giving only a bare list of the names of the bishops of Rochester, because “very few, in fact hardly any, of the deeds of the bishops of the town I have come across seem to me worth recording". Ouch.

This judgement was, however, a bit unfair not only on Paulinus, leading figure in the conversion of Northumbria, but also on Gundulf, the first noteworthy Norman bishop of Rochester, who was a great church-builder and is responsible for much of the cathedral as it now stands (and also for the White Tower, the oldest part of the Tower of London). This is he: 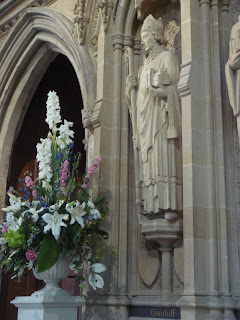 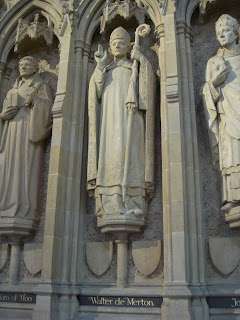 The bishop to Merton's left is St John Fisher, martyr and last Catholic Bishop of Rochester.

The cathedral has some lovely medieval things, like this thirteenth-century wall painting of the wheel of fortune: 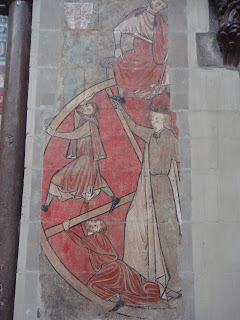 A surprising number of people arrive at this blog looking for pictures of a medieval wheel of fortune, and get this rather boring manuscript illustration; the Rochester one is much more dynamic, so maybe some of those hits can be redirected here instead. The wall-painting is so well-preserved because it was hidden behind a pulpit until 1840. Thank goodness for benign neglect! 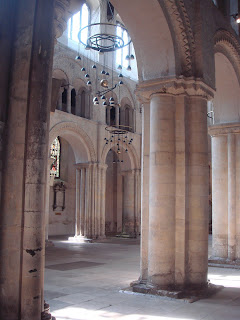 The nave, which is Norman, is particularly fine. 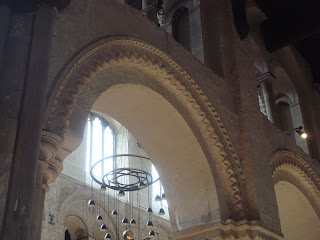 (How did I become the kind of person who says things like "the nave, which is Norman, is particularly fine"? Absurd). 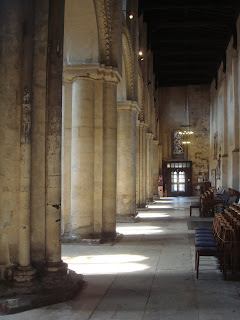 But there are many fine things here: 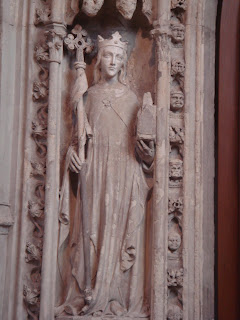 This figure represents 'Ecclesia', the Church, and is part of this door, which dates from 1343: 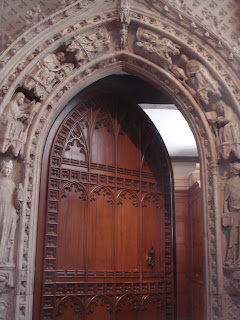 According to the cathedral website (do take the panoramic tour there - it's excellent), this was once the monks' entrance to their dormitory, and now leads to the cathedral library. I wonder what you have to do to get a job there...

The crypt, the oldest part of the building: 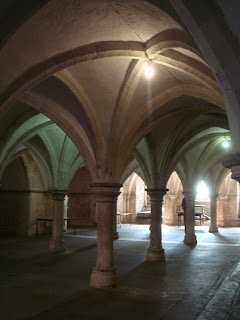 I can't leave the subject of Rochester without linking to the utterly bizarre story of St William of Perth; but as I hope this post has shown, Rochester has some excellent claims to interest besides murdered Scottish pilgrims. And Charles Dickens. And surprisingly sympathetic murderous opium-eating choirmasters. 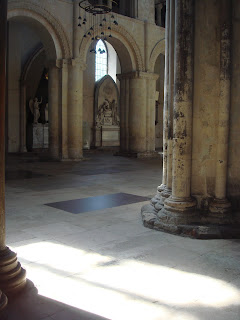 Update: more on Rochester here.
Posted by Clerk of Oxford at 3:24 pm