On Transience, V: Despise the World 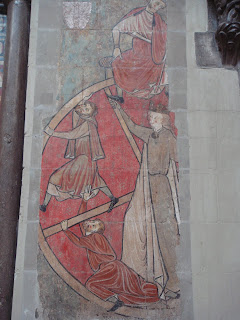 Fortune's wheel in a medieval wall-painting at Rochester Cathedral

Why is the world beloved, that fals is and vein,
Sithen that hise welthes ben uncertein?

Truste ye rather to letters writen in th'is
Than to this wretched world, that full of sinne is.

It is fals in his beheste and right disceiveable;
It hath begiled manye men, it is so unstable.

It is rather to beleve the waveringe wind
Than the chaungeable world, that maketh men so blind.

Whether thou slepe othere wake thou shalt finde it fals,
Bothe in his bisynesses and in his lustes als.

Telle me where is Salamon, sumtime a kinge riche?
Or Sampson in his strenkethe, to whom was no man liche?

Or the fair man, Absolon, merveilous in chere?
Or the duke, Jonatas, a well-beloved fere?

Where is become Cesar, that lord was of al?
Or the riche man cloithd in purpur and in pal?

Telle me where is Tullius, in eloquence so swete?
Or Aristotle the philisophre with his wit so grete?

All these grete princes with her power so hiye
Ben vanished away in twinkeling of an iye.

And yit it draweth man from Heveneriche blis,
And ofte time maketh him to sinne and do amis.

Thou that art but wormes mete, powder and dust,
To enhance thysilf in pride sette not thy lust.

For thou woost not today that thou shalt live tomorewe,
Therfore do thou evere weel, and thanne shalt thou not sorewe.

It were full joyful and swete lordship to have,
If so that lordship miyite a man fro deeth save.

But, for as miche a man muste die at the laste,
It is no worship but a charge lordship to taste.

Calle nothing thine owen, therfore, that thou maist her lese:
That the world hath lent thee, eft he wolde it sese!

Sette thine herte in Heven above and thenke what joye is there,
And thus to despise the world I rede that thou lere.


This is a fifteenth-century English translation of a medieval Latin poem known as 'Cur mundus militat'. The ideas and images of the poem are extremely common, found in countless medieval texts - the world is transient, earthly joy is fickle, even great men die, Ubi sunt qui ante nos fuerunt?, and so on. I suppose all we can credit this English poet with are the rhymes, which are sometimes right on the border between genius and tenuous (especially 'writen in th'is/full of sinne is'). Nonetheless, there's a directness about this poem which appeals to me.

Here's a picture of one manuscript of this poem; it survives in numerous manuscripts (there's a list here), which indicates the popularity of this kind of thing in the Middle Ages. You have to admit the poem has a point: if even Tullius (Cicero) and Aristotle are no more, it says, what hope for the rest of us?

Why is the world beloved, which false is and vain,
When its wealth is so uncertain? [unstable]

As soon slideth its power away
As doth a brittle pot that is fresh and gay.

Trust ye rather to letters written in the ice
Than to this wretched world, that full of sin is.

It is false in its promises and right deceitful;
It hath beguiled many men, it is so unstable.

It is better to believe the wavering wind
Than the changeable world, that maketh men so blind.

Whether thou sleep or wake thou shalt find it false,
Both in its business and in its pleasures als. [also]

Tell me, where is Solomon, at one time a king rich? [great]
Or Samson in his strength, to whom no man was like? [equal]

Or the fair man, Absalom, so beautiful in chere? [appearance]
Or the duke, Jonathan, a well-beloved fere? [friend]

What has become of Caesar, who was lord of all?
Or the rich man clothed in purple and in pall?

Tell me where is Tullius, in eloquence so sweet?
Or Aristotle the philosopher with his wit so great?

Where are these worthies who were here before?
Both kings and bishops, their power is all loren. [lost]

All these great princes with their power so high
Are vanished away in the twinkling of an eye.

The joy of this wretched world is a short feast:
It is likened to a shadow that abideth the least.

And yet it draweth man from heavenly bliss,
And oft-time maketh him to sin and do amiss.

Thou that art but worm's meat, powder and dust,
To enrich thyself in pride set not thy lust.

For thou knowest not today that thou shalt live tomorrow;
Therefore do thou ever well, and then shalt thou not sorrow.

It would be full joyful and sweet lordship to have,
If it could be that lordship might a man from death save.

But, for as much as a man must die at the last,
It is no honour, but a burden, lordship to taste.

Call nothing thine own, therefore, that thou mayest here lose:
What the world hath lent thee, back he will it seize!

Set thine heart in Heaven above and think what joy is there;
And thus to despise the world I advise that thou lere. [learn]


In a similar vein, see the rest of my series 'On Transience':
Where beth they biforen us weren?
Erthe oute of erthe is wondirly wroghte
'Think on yesterday'
'This world fareth as a fantasy'
Posted by Clerk of Oxford at 11:50 pm

Email ThisBlogThis!Share to TwitterShare to FacebookShare to Pinterest
Labels: Medieval, On Transience, Poetry