St Anselm and Bertrand Russell and the Proof of God 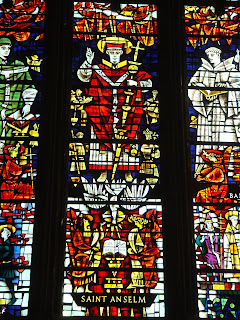 St Anselm, from this window in Canterbury Cathedral

This is a snippet from one of the most illuminating books ever written about medieval history, R. W. Southern's Saint Anselm and His Biographer: A Study of Monastic Life and Thought 1059-c.1130, published in 1966. It's an account of Anselm of Canterbury and the Canterbury monk Eadmer, his close friend and admirer, who wrote Anselm's biography (and many other things besides). This little extract exemplifies, to me, one of the best virtues of traditional scholarship: to have such a broad range of reference that you can make connections across time and space - or, to put it rather inelegantly, to have the power of remembering that every 'yesterday' was some real person's 'today'.

"Whether it is true or false, nothing is more surprising than the way in which this proof has united, at least temporarily, men of the most diverse temperaments and outlooks – a tenuous link across vast seas of spiritual difference. Among living philosophers none is perhaps further removed from Anselm in outlook, though perhaps not so far in qualities of mind, than he who remembers:

"Leave out Trinity Lane, the tobacco and the ‘Great Scott’ (delightful evocation of an age more remote in spirit than the eleventh century) and substitute Bec, Matins and Deo gratias, and it was just so that the argument came to Anselm in 1078:

Behold, one night during Matins, the grace of God shone in his heart and the matter became clear to his understanding, filling his whole being with immense joy and jubilation."


The philosopher in question is Bertrand Russell, as I would not have known without Google. I do like that Southern felt 1890s Cambridge to be 'more remote in spirit' from 1966 than eleventh-century Normandy; I often feel the same way about the 1960s. 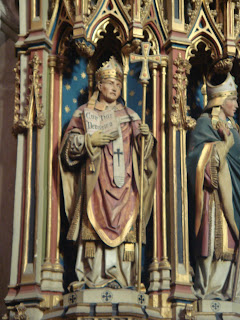 St Anselm on the tomb of Archbishop Henry Chicele in Canterbury Cathedral
Posted by Clerk of Oxford at 11:42 am

Now, there's three gents I wouldn't mind having to tea!

It would certainly be a lively party!

Would you allow me to use some of your photos in a children's book on Anselm?

Simonetta - yes, certainly! Email me (fuchsia100 (AT) yahoo.co.uk) and let me know what you want.