'Now is the Twelfth Day come'

1. Now is the Twelfth Day come,
The Father and Son together are come,
The Holy Ghost, as they were one
In fere; [together]
God send us a good New Year!

2. I will you sing with all my might
Of a child so fair in sight,
A maid him bore the other night,
So still,
As it was his will.

3. Three kings out of Galilee
Came to Bethlehem, that city,
For to go into that see [city]
By night;
It was a full fair sight.

4. As they came forth with their offering,
They met with Herod, that proud king;
He asked about their coming
That tide,
And thus to them he said:

5. "From whence come ye, kings three?"
"Out of the East, as thou mayst see,
To seek Him that ever shall be,
Through right,
Lord and King of might."

6. "When ye have with that king been,
Come again this way by me,
And tell me the sights that ye have seen;
I pray
Ye go no other way."

7. Of Herod, that proud king,
They took their leave, of old and young;
And forth they went with their offering
In sight,
And there they came by night.

8. Into Bethlehem they did pass;
The star shone upon their face
Brighter than ever shone sun in glass
In land;
Jesu with Mary there they found.

9. When they came into the place
Where Jesu with His mother was,
They made offering with great solace, [joy]
Not fear,
With gold, incense and myrrh.

10. When they were homeward went,
The Father of heaven an angel sent
To those three kings that made presents,
Ere day,
And thus to them did say:

11. "My Lord hath warned you of your foe,
By King Herod that ye not go;
For if ye do, he will you slay,
And betray;
Go ye another way."

12. When they came home to their country,
Blithe and glad they were all three
Of the sights that they had seen,
By night,
Jesu and Mary bright.

13. With treason Herod began to say,
He thought Jesu to have slain;
Into Egypt they went full plain;
Beside,
Joseph was their guide.

14. King Herod he made his vow,
Great plenty of children he slew,
He thought they must have been Jesu;
I say,
He failed of his prey.

15. Herod was wrath in royalty;
He slew children right great plenty
In Bethlehem, that fair city,
With strife;
Nor left he none alive.

17. Almighty God in majesty,
In one God persons three,
Bring us to the bliss that is so free,
In fere;
And send us a good New Year!

This is a lively Epiphany carol, full of drama and dialogue. It comes from a fifteenth-century manuscript of carols, BL Sloane 2593, and I've modernised the spelling from this text; the refrain means "Kings shall come from Sheba, offering gold, frankincense and myrrh" (a quotation from a Christmas hymn).  One of my favourite things about it is the moustache-twirling villain Herod in verse 16: "Herod laughed and said, "A-ha!"  But really the whole thing is wonderful.

Let's take a lot at the same story as it appears, illustrated in exhaustive detail, in the splendid manuscript BL Yates Thompson 13. This fourteenth-century English Book of Hours has exquisite illustrations on a whole range of subjects but also depicts the entire narrative of the Magi and King Herod, in a series of pictures running across the bottom of ff. 90-95v.  So this is the Visit of the Magi: Medieval Graphic Novel Version.

We begin with one king: 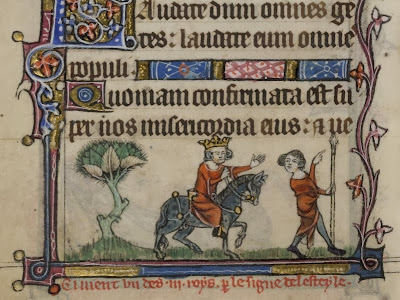 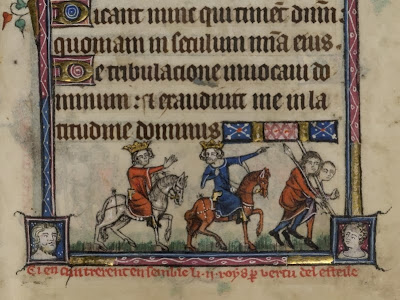 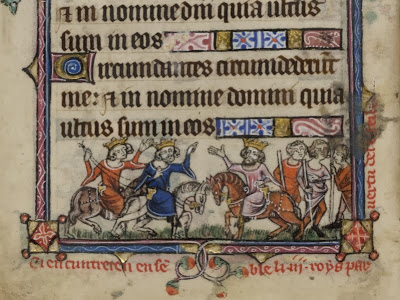 This depicts them meeting and gathering their servants, I suppose, but it calls to mind Illuminare Jerusalem's description of the Magi as a 'lusty rout'!

The Magi encounter the shepherds, who point the way to Bethlehem: 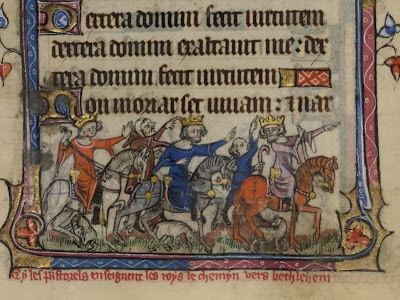 (Their pointing fingers also seem to say 'Turn the page!')

When we turn the page, they are arriving at Herod's castle: 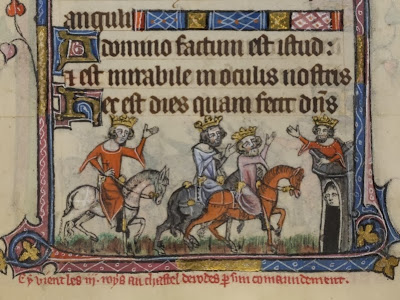 They tell Herod the purpose of their quest: 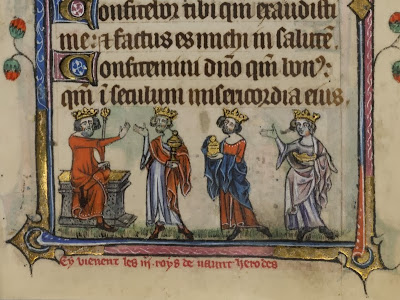 Troubled by what the Magi have told him, Herod sends letters gathering the 'chief priests and scribes of the people': 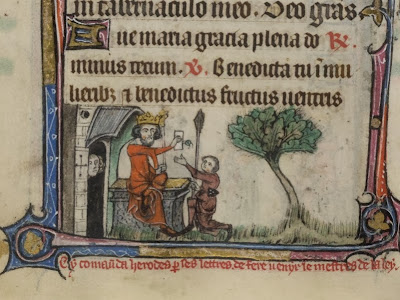 And they point out to him the prophecies which tell that Christ is to be born in Bethlehem: 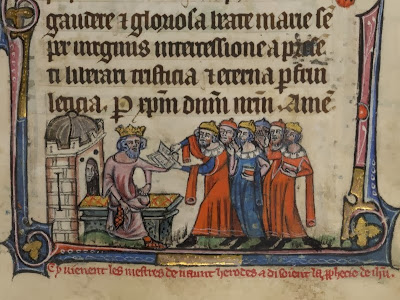 Meanwhile, the Magi find the child and present their gifts, but are quickly warned by an angel (while sleeping in their crowns!) to flee: 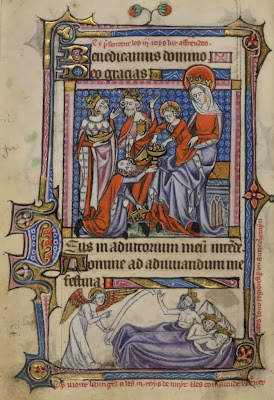 'They departed into their own country by another way', and that's the last we see of them.  But Joseph is also warned by an angel: 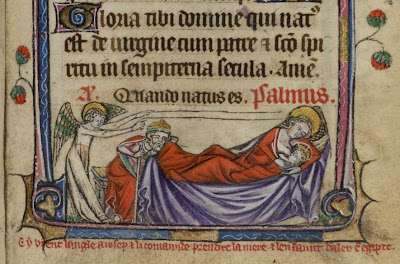 And takes his family to Egypt: 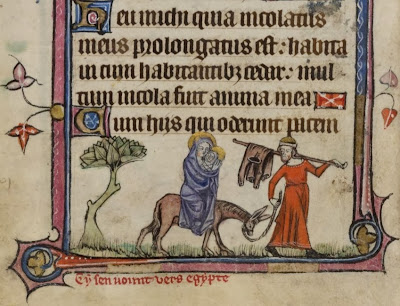 The manuscript now moves into apocryphal legend, which tells what happened when Herod pursued the Holy Family into Egypt. According to the legend, as they travel along Christ and his parents pass a farmer sowing his corn, and the infant Christ makes the corn to ripen miraculously all at once. When Herod subsequently passes by and asks if the farmer has seen Christ, the farmer is able to honestly say that they had passed by 'when his seed was sown' - and Herod, seeing him harvesting the corn, concludes this must have been a long time ago. Foiled! This story survived in the folk ballad 'The Miraculous Harvest', also known by the title 'King Pharoah'. Legend also said that as Christ passed by pagan idols shattered and devils flew out of them, as we see here: 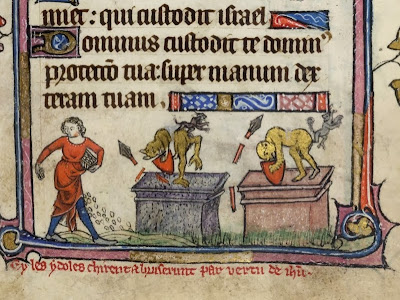 Learning that the Magi set sail from Tarsus, Herod orders the ships there to be burnt: 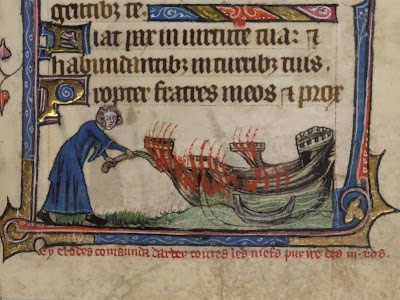 Having failed in his pursuit, he sends out his knights to kill children under two years old: 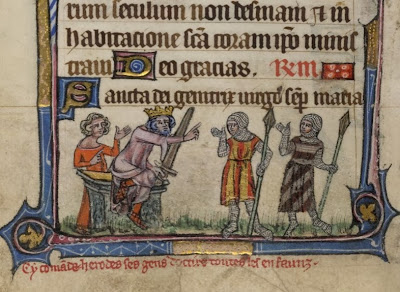 And we see the massacre of the children, their mothers struggling against the soldiers: 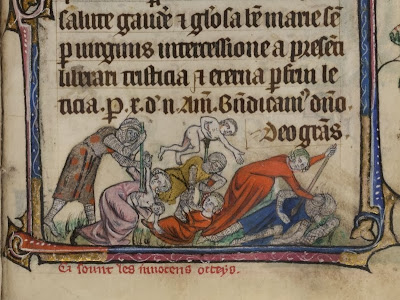 Thank you. It is such a beautiful post. I loved it.

Wonderful post. May the Magi bring you tonight presents and blessings, as they do here in Spain.

Thank you both, and a happy Epiphany to you!