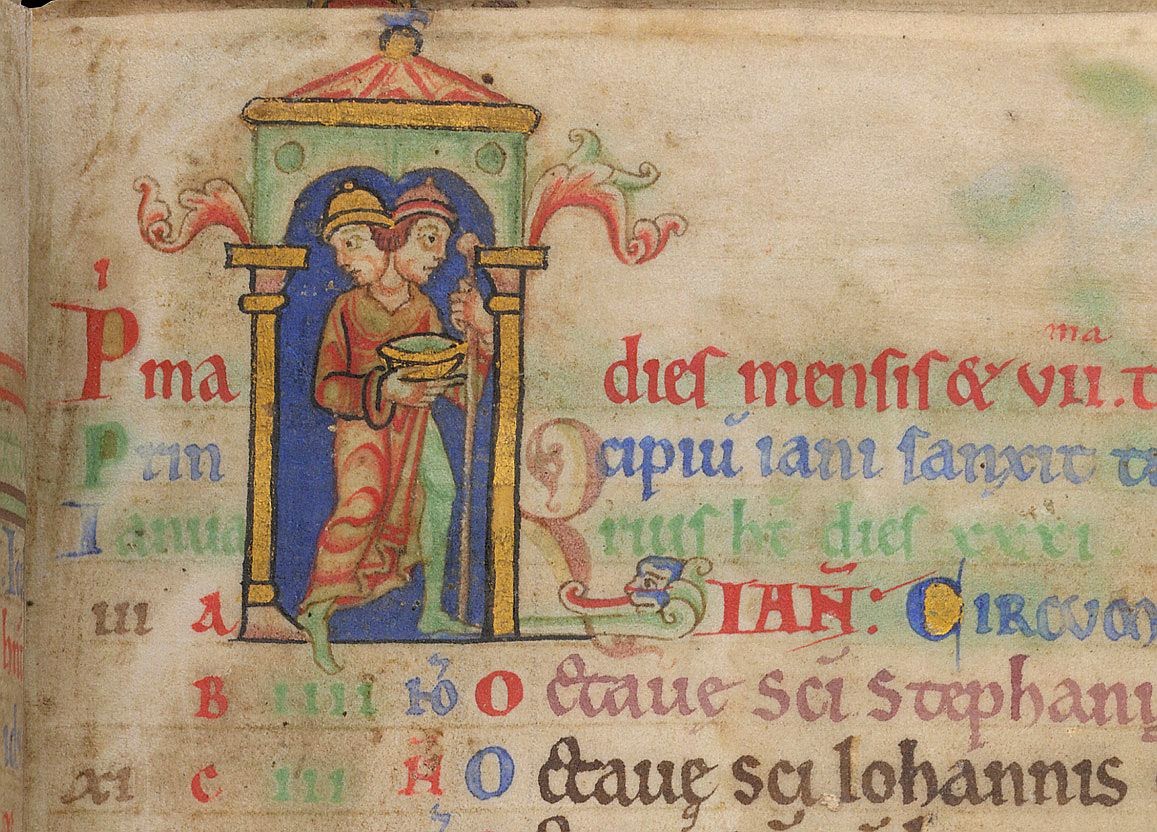 Janus, from a calendar for January in a 12th-century English Psalter (BL Lansdowne 383, f. 3)

In the Anglo-Saxon period the date of the New Year was not universally agreed upon. Bede says that before converting to Christianity the Anglo-Saxons celebrated the start of their new year on December 25, but afterwards they adopted the Roman practice of beginning the year on January 1. However, there were people who preferred alternate dates, and one of them was the homilist Ælfric, who lived in the second half of the tenth century. Ælfric wrote a homily for January 1 in which he discusses, among other things, the various possible dates for celebrating the New Year. He sees no logic behind the January date, and would prefer to begin the year on March 21, the spring equinox and the anniversary of the day when 'all times were created', the fourth day after the creation of the world. In his view the start of a new year should more appropriately be in the spring than in midwinter, to coincide with the time when all things on earth are springing with new life. (And contemplating today's grey beginning to the year, I think he has a point!)

Here's the last section of his sermon, with my translation; you can read the rest of the sermon (which is principally about the Circumcision of Christ, celebrated on January 1) here.


'We have often heard that people call this day 'year’s day', as the first day in the course of the year, but we do not find any explanation in Christian books as to why this day should be appointed the beginning of the year. The ancient Romans, in pagan days, began the calendar of the year on this day; the Jewish people began at the spring equinox, the Greeks at the summer solstice, and the Egyptians began the calendar of their year at harvest. Now our calendar begins on this day, according to the Roman practice, not for any holy reason, but because of ancient custom. Some of our service books begin at the Advent of the Lord, but nonetheless that is not the beginning of our year. There is no reason for it being this day, although our calendars continue to put it in this place.

It is most rightly thought that the beginning of the year should be appointed to the day when the Almighty Creator fixed the sun, moon, and stars and the beginning of all time; that is the day on which the Jewish people begin the calculation of their year, as the leader Moses wrote in the book of the law. Indeed, God said to Moses about that month: “This month is the beginning of the months, and it is the first in the months of the year”. Now the Jewish people observe the first day of the year on the spring equinox, because on that day the times of the year were appointed. The eighteenth day of the month which we call March, which you call ‘Hlyda’, was the first day of this world. On that day God created light and morning and evening. Then three days went by without time being measured, because the stars were not created until the fourth day. On the fourth day the Almighty created all the stars and the seasons of the year, and said they were to mark days and years. Now the Jewish people begin their year on the day when all times were created, that is on the fourth day after the creation of the world. The teacher Bede calculates with great accuracy that this day is the 12th calends of April [i.e. 21 March], the day which we celebrate in honour of the holy man Benedict because of his great virtues. Indeed, the earth also shows by the shoots which are then quickened again that this is the time which should most rightly be the year’s beginning, when the earth was created.

Now foolish men practise divination by many kinds of sorcery on this day, in great error, according to heathen customs contrary to their Christian faith, so that they may prolong their lives or their health; but in doing that they anger the Almighty Creator. Many people are also so greatly wrapped in error that they plan their journeys according to the moon and their deeds by the days, and will not let blood on a Monday because it is the beginning of the week - but Monday is not the beginning of the week, it is the second; Sunday is first in creation, in order, and in honour. Some foolish people also say that there are some kinds of cattle which one should not bless; they say that if they are blessed they go wrong, but are made obedient by cursing. And so they use God’s gifts to their injury, without blessing, with the devil’s curses. All blessing comes from God, and cursing from the devil. God made all creation, and the devil cannot create anything; he is an inciter to evil, a worker of falsehoods, originator of sins and deceiver of souls. Any part of creation which seems perverse has been created as a punishment for sins. Holy men often lived in the desert among fierce wolves and lions, among all kinds of animals and serpents, and nothing was able to harm them; they tore horned snakes apart with their bare hands and easily killed great dragons without any harm, through the power of God.

Woe to those people who make use of God’s creation without his blessing, with the devil’s sorceries, when the teacher of the nations, Paul, said, “Whatever you do in word or deed, do it always in the name of the Lord, giving thanks to the Almighty Father through his Son”. That man’s Christian faith is worth nothing, who spends his life in devilish sorceries; he has the appearance of a Christian, but is in fact a wretched heathen. As the same apostle said of such people, “I fear that I laboured in vain when I brought you to God, now that you keep days and months with vain divination”.

It is however true that according to nature in creation every bodily creature which earth brings forth is more full and stronger at the full moon than at the waning. For instance, if trees are cut down at the full moon they are harder and last longer as timber, especially if they are made without sap. This is no sorcery, but a natural thing, through creation. So, also, the sea accords wonderfully with the course of the moon; they are always fellows in waxing and waning, and when the moon daily rises four prican [divisions of an hour] later, so also the sea always flows four prican later.

Let us set our hope and happiness in the foreknowledge of the Almighty Creator, who established all creation in three things: that is in measure, number and weight. To him be glory and praise for ever world without end. Amen.' 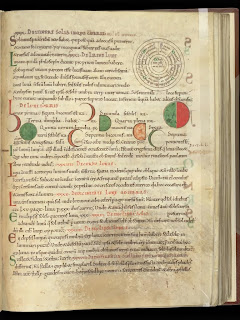 In criticising people who practice divination at the new year, Ælfric is probably referring as much to the customs of his fellow monks and clergy as to any persistence of pagan traditions among the laity. He does not dispute that there are correspondences to be observed in the natural world (the tracking of favourable seasons for blood-letting, for instance, was a standard part of learned science and medicine in the Anglo-Saxon period); he's just sceptical of people planning their lives around these  customs, or basing them on incorrect ideas, such as Monday being the first day of the week. In this view of the world, since all things in creation are intimately connected through the Creator who gave them life, to determine the accurate dates of times and seasons is not pedantry but an inquiry into the mind of God, an attempt to understand the deeper meaning lying behind the natural order of created things. Nis ðis nan wiglung, ac is gecyndelic ðincg þurh gesceapenysse. 'This is no sorcery, but a natural thing, through creation.' 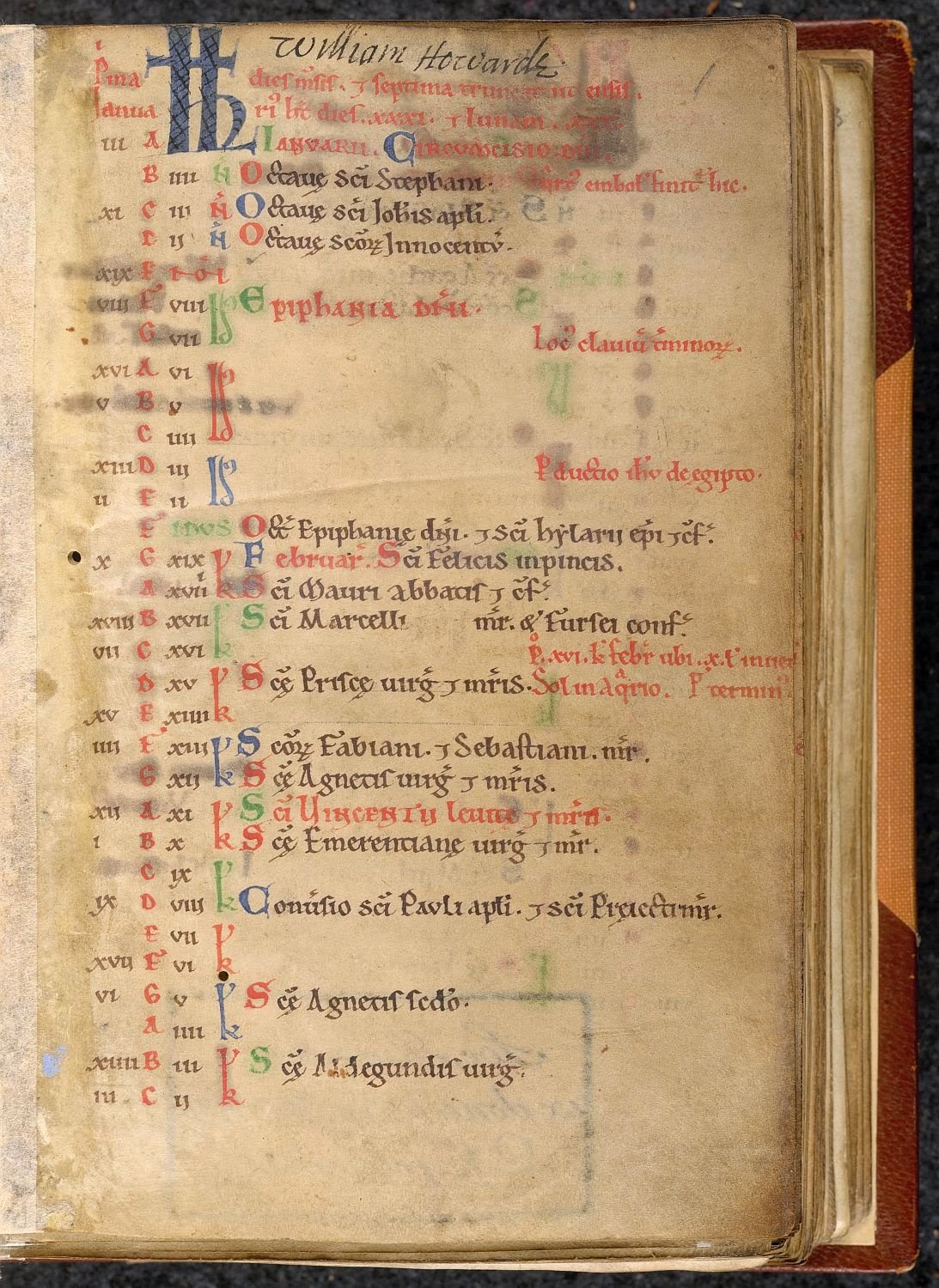 All good wishes for the coming year, and thanks for your full and fascinating posts!

Thank you, and a happy new year to you!

Thank you for this fascinating post! And a Blessed New Year!

Do you happen to know Reginald Lane Poole's delightful little discussions of "The Christian Year" and "The Beginning of the Year" in Medieval Reckonings of Time (No. 3 in SPCK's 'Helps for Students of History' series, and first published in 1918)?

As well as 1 January, he notes 1 March in edicts of Lombard Kings, at Benevento, and at Venice until 1797, and 1 September, "usually associated with the Byzantine annus Mundi".

"Connected with the Year of Grace", are those reckonings from the Annunciation, 25 March, "preceding A.D. 1", prevalent in Burgundy and Northern Italy, acquiring the name "calculus Pisanus", and used occasionally by the popes "between 1088 and 1145". More popular was from the Nativity, "December 25, 1 B.C." It, however, was widely supplanted by "the style of Lady Day, March 25, subsequent to the reckoning from Christmas." It was called (among other things) the "calculus Florentinus", and was 12 months behind the calculus Pisanus.

"A computation not far removed from this in actual date, but the most illogical and inconvenient that could have been devised, is that from Easter." This "mos Gallicanus" came into use at the French Court from the early 13th century, and became official in Holland and even Cologne, but as "the stylus curiae" it "did not supercede the popular reckoning from Christmas." He ends with a fascinating example of mid-13th-century 'time travel' between 1245, 1244, 1246, 1245, and 1244, over the course of a month-and-a-half in going from Venice to Florence to Pisa to Provence to France - which he thinks would probably not bother the traveller, who would think in terms of "the year of the place where he lived".

(Unfortunately, it is not among his many interesting-looking works available at the Internet Archive.)

Goodness, it's even more complicated than I thought! How did anyone ever keep track of what year it was?

A blessed New Year to you too - whenever you might choose to celebrate it!

Found your blog late last year... and I so enjoy it! Blessings to you in this new year. Happy 8th Day of Christmas to you and yours!

Thank you for all the fascinating insights and beautiful posts. I don't know enough to understand them all but they're usually lovely to look at!! All the Very Best for 2016.

Dear Ms. Parker, Thank you very much for pointing me towards Aelfric's sermons. I will probably give his Quinquagesima sermon with light editing and proper attribution. Fr. Phil

You likely know this, but:
The Old English Martyrology reckons the beginning of the year from December 25. Whether that's a survival from the pre-Christian reckoning recorded by Bede, or a Christian development as part of the Nativity reckoning mentioned by An Old Mertonian, I don't know, but in any case I find it interesting.

Thanks! I'd actually forgotten that - the Menologium's wonderful opening lines about Christ being born 'at midwinter'! That does provide an interesting comparison.