'A flower sprung of a tree': Some Jesse Trees

I went to look for one medieval Jesse tree, in the British Library's Catalogue of Illuminated Manuscripts, and found so many that I couldn't choose which I liked best.  So here are twelve.

The root of the idea of the Jesse tree comes from the passage from Isaiah 11, 'there shall come forth a rod out of the stem of Jesse, and a branch shall grow out of his roots', combined with the genealogy of Christ provided at the beginning of the Gospel of Matthew.  This is a very popular theme in medieval art, in all kinds of media; I posted last December about some stained glass examples (in Canterbury and Dorchester) and earlier this year I encountered another at Nackington in Kent. These, being fragmentary, made more sense to me after I had seen these manuscript examples.  To take them in roughly chronological order, this is from the Shaftesbury Psalter (BL Lansdowne 383), dated to the second quarter of the twelfth century: 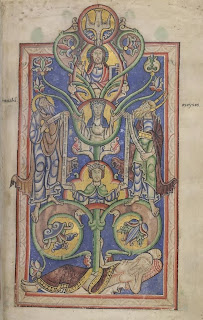 This was the period which saw the first flowering of the Jesse tree as an artistic subject (wikipedia gives a fairly useful overview).  A tree is a flexible thing to decorate a page with, and as well as full-page illustrations like this, the Jesse tree appears in various other forms. So, it can be an ingenious long initial 'L', for 'Liber generationis Iesu Christi filii David', the opening of the Gospel of Matthew (early 13th century, Royal 4 D I, f. 2): 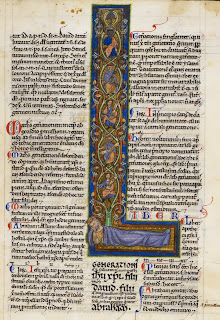 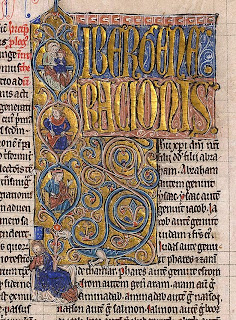 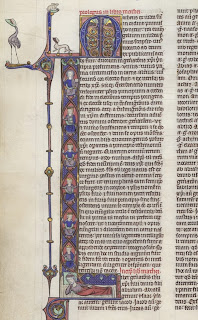 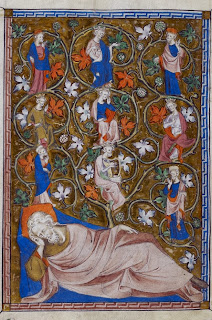 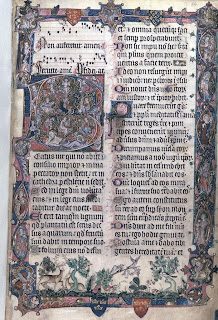 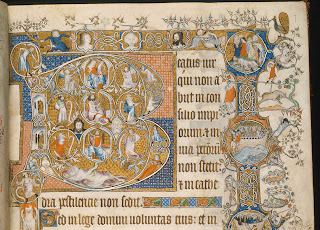 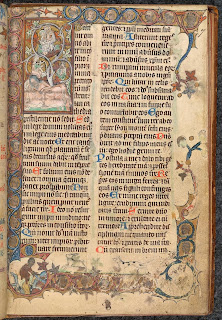 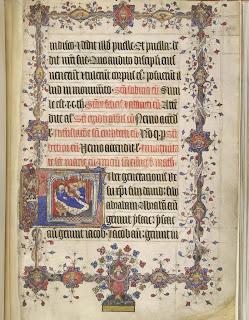 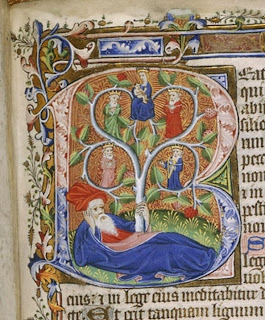 (I like how nonchalant Jesse looks! He's usually asleep.) 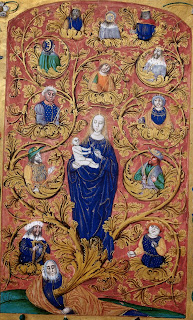 There is a flower sprung of a tree,
The root thereof is called Jesse,
A flower of price;
There is none such in paradise.

This flower is fair and fresh of hue;
It fades never, but ever is new;
The blessed branch where this flower grew
Was Mary mild who bore Jesu,
A flower of grace!
Against all sorrow it is solace.

The seed thereof was of God's sending,
Which God himself sowed with his hand;
In Bethlehem, in that holy land,
Within her bower he there her found.
This blessed flower
Sprang never but in Mary's bower.

When Gabriel this maiden met,
With "Ave, Maria," he her gret [greeted]
Between them two this flower was set,
And was kept, no man should wit, [know]
Til on a day
In Bethlehem, it began to spread and spray.

When that flower began to spread,
And his blossom to bud,
Rich and poor of every seed, [i.e. kind]
They marvelled how this flower might spread,
Until kings three
That blessed flower came to see.

Angels there came out of their tower
To look upon this fresh flower,
How fair he was in his colour,
And how sweet in his savour,
And to behold
How such a flower might spring amid the cold.

Of lily, of rose on ryse, [branch]
Of primrose, and of fleur-de-lys,
Of all the flowers at my devyse [I can think of],
That flower of Jesse yet bears the prize,
As the best remedy
To ease our sorrows in every part.

I pray you, flowers of this country,
Wherever ye go, wherever ye be,
Hold up the flower of good Jesse,
Above your freshness and your beauty,
As fairest of all,
Which ever was and ever shall be.

This is John Rutter's setting of John Audelay's beautiful fifteenth-century carol 'There is a floure'.
Posted by Clerk of Oxford at 8:18 pm

Thank you for this and all your other wonderful Advent postings.

Thanks for commenting! I thought I might be overdoing it with the Advent posts, so I'm glad someone is enjoying it :)