'Sing we Yule til Candlemas' 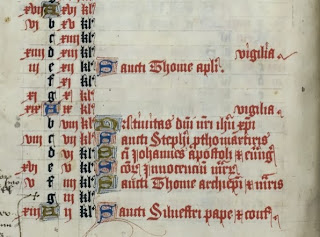 The red-letter feasts of late December, in a 15th-century calendar (BL Royal 2 B XIV, f. 6v)

As a lover of carols, I'm much in favour of the medieval practice of celebrating Christmas to some degree all through the dark days of January, so today I thought I would post a carol which encourages us to keep singing throughout this season. It runs through not just the twelve days of Christmas but also the forty days of the Christmas season, all the way up to Candlemas, the Feast of the Purification, on February 2. It's a fifteenth-century carol (from Bodleian MS Eng. poet. e. I), and the unmodernised text can be found on this site, which also lists the various feasts mentioned: St Stephen on the 26th, St John on the 27th, the Holy Innocents on the 28th, St Thomas Becket on the 29th (check back soon for more carols about him!), the Circumcision of Christ on January 1st, Epiphany and Candlemas.

Make we mirth
For Christ's birth,
And sing we Yule til Candlemas.

1. The first day of Yule have we in mind,
How God was man born of our kind;
For he the bonds would unbind
Of all our sins and wickedness.

2. The second day we sing of Stephen,
Who stoned was and rose up even
To God whom he saw stand in heaven,
And crowned was for his prowess. [bravery]

3. The third day belongeth to Saint John,
Who was Christ's darling, dearer none,
To whom he entrusted, when he should gone, [when he had to die]
His mother dear for her cleanness. [purity]

4. The fourth day of the children young,
Whom Herod put to death with wrong;
Of Christ they could not tell with tongue,
But with their blood bore him witness.

5. The fifth day belongeth to Saint Thomas,
Who, like a strong pillar of brass,
Held up the church, and slain he was,
Because he stood with righteousness.

6. The eighth day Jesu took his name,
Who saved mankind from sin and shame,
And circumcised was, for no blame,
But as example of meekness.

7. The twelfth day offered to him kings three,
Gold, myrrh, and incense, these gifts free,
For God, and man, and king was he,
Thus worshipped they his worthiness.

8. On the fortieth day came Mary mild,
Unto the temple with her child,
To show herself clean, who never was defiled,
And therewith endeth Christmas.

There are several carols along these lines; last year I posted about 'Welcome Yule', so here's Charles Parry's setting of it (but fair warning - it's irresistibly catchy!):

St Stephen, whose feast is today, has a number of medieval songs about his life and death, including 'St Stephen, the first martyr', 'There was no deathe nor worldlie joie', and a pretty amazing ballad in BL Sloane 2593 ('St Stephen was a clerk'). In this version of the story Stephen is a servant in King Herod's hall who forsakes his master for Christ, at which the cooked bird on the table comes back to life and announces Christ's birth:

1. Saint Stephen was a clerk
In king Herod's hall,
And served him of bread and cloth
As ever king befall.

2. Stephen out of kitchen came
With boar's head in hand
He saw a star was fair and bright,
Over Bethlem stand.

3. He cast down the boar's head,
And went into the hall;
"I forsake thee, king Herod,
And thy works all.

4. "I forsake thee, king Herod,
And thy works all,
There is a child in Bethlem born,
Is better than we all."

5. "What aileth thee, Stephen,
What is thee befall?
Lacketh thee either meat or drink,
In king Herod's hall?"

6. "Lacketh me neither meat nor drink
In king Herod's hall,
There is a child in Bethlem born,
Is better than we all."

7. "What aileth thee, Stephen,
Art thou mad, or begun to braid? [rave]
Lacketh thee either gold or fee,
Or any rich weeds?" [clothes]

8. "Lacketh me neither gold nor fee,
Nor none rich weeds,
There is a child in Bethlem born
Shall help us at our need."

9. "If this is all true, Stephen,
All so true, iwis,
This capon shall crow
That lieth here in my dish.

10. That word was not so soon said,
That word in the hall,
The capon crew, Christus natus est,
Among the lords all.

11. Rise up my tormentors,
By two, and all by one,
And lead Stephen out of town,
And stone him with stone.

12. Took they Stephen,
And stoned him in the way,
And therefore is his even
On Christ's own day.

So you see, if you want to keep singing until Candlemas there's no shortage of things to sing! 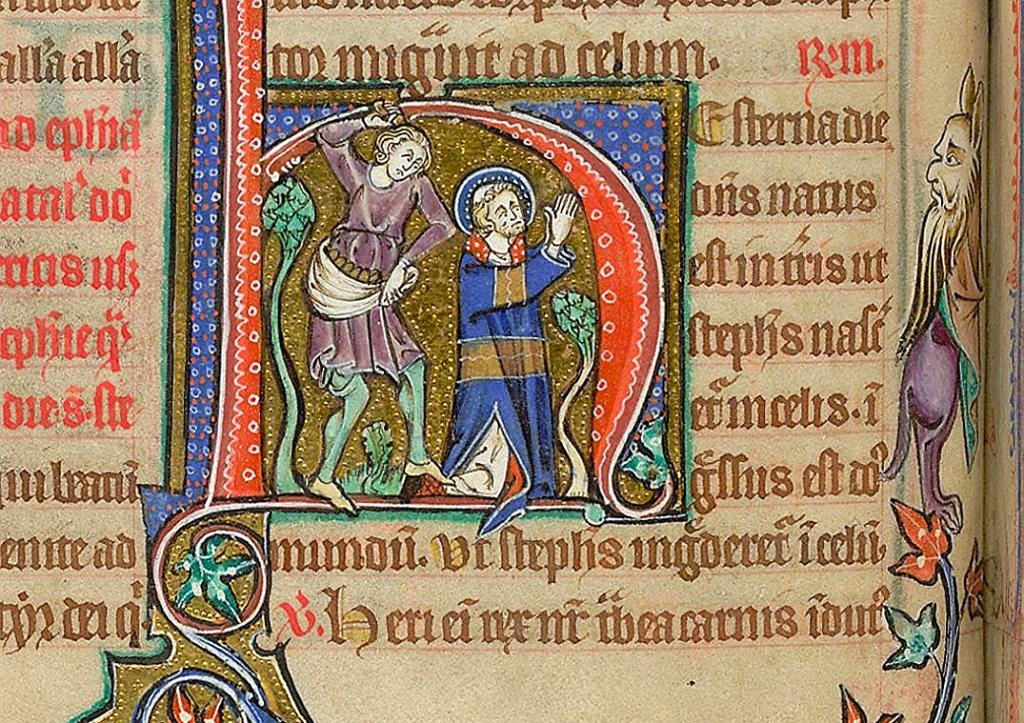 Excellent! I wonder how recent the shift away from this is? (I can imagine - without being able to cite specifics - Mr. Pickwick or Washington Irving still keeping Christmas in much the same way, and attention to it certainly featured in some of the Liturgical Movement, if I think of the work of Pius Parsch.)

I also wonder (not knowing in detail what would be common, or available at all, in 15th-century England) whether some of the details of the stanzas might have an immediate liturgical background?

For example, the "prowess" of Stephen is presumably the "fortitudine" of Acts 6:8, but this also features in one and another antiphon and responsory in his modern Roman Office. And the "cleanness" of John reminds me of the "virgini" in "Cui Christus in cruce matrem virginem virgini commendavit" in his Roman Office.

Yes, it would be interesting to know for sure! The celebration of Twelfth Night was certainly still popular in England in the nineteenth century (and in some places today, though probably as a conscious revival) - I'm currently re-reading The Pickwick Papers so I shall watch out for how they keep the Christmas season!

I think it's very possible indeed that there is a liturgical background to the details of this carol - I'm not familiar enough with the liturgy for those feasts to say for sure, but these songs often come from a clerical or monastic milieu, and it's common to find songs with, for instance, the antiphon for the feast-day as the refrain (in Latin) and verses in English. I imagine that the commemoration of all of these days - rather than just Christmas Day, Epiphany and Candlemas - would have been primarily an interest of churchmen rather than the laity.

After submitting my comment, Robert Herrick's "Ceremony upon Candlemas Eve" came to mind - about getting "all / Wherewith ye dressed the Christmas hall" down in time, to avoid trouble from goblins!

I once read, and cannot rediscover where, that it was a Welsh custom to keep the decorations up even longer...

Thank you for the additional details. Once verses were in the vernacular, even for 'internal' devotion or amusement, they could easily be shared 'outward' - though what may ever be known for sure about any such thing...

Has anyone compiled a record or CD of Candlemas Carols?

Not that I know of!