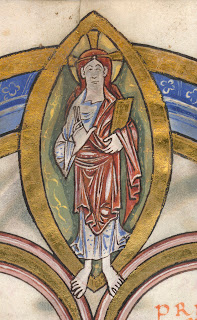 O Emmanuel, our king and law-giver,
the hope of the nations and their saviour,
come to save us, O Lord our God.


O God of spirits, how wisely thou wast
with a rightful name named
Emmanuel, as the angel said
first in Hebrew. That is, interpreted
freely according to its hidden meaning: “Now the heavens' Guardian,
God himself, is with us.” So the men of ancient times
the King of all Kings and the pure
Priest also truly prophesied;
so the glorious Melchisedech of old,
wise in spirit, unveiled the divine majesty
of the eternal All-wielder. He was the bringer of law,
the leader-in of learning, to those who long
had hoped for his coming here, as it had been promised to them,
that the Son of the Lord himself would
purify the people of earth,
and by the strength of his spirit also would journey
to seek the depths. Now they patiently
waited in fetters for when the Son of God
would descend to the desolate. And so they spoke,
weakened by torments: “Come now thyself,
high King of heaven! Bring healing life to us,
weary slaves in prison, overcoming by weeping,
bitter briny tears. The cure for our great need
depends on thee, entirely and alone.
Seek out the sorrowful captives here,
do not leave behind so great a multitude
at thy return to the heavens, but show mercy to us
in kingly manner, Saviour Christ,
Prince of Glory; do not let the accursed ones
possess power over us! Leave to us the eternal joy
of thy glory, so that they may honour thee,
glorious King of hosts, whom once thou
fashioned with thy hands. Thou dwellest on high
for ever with the Ruler and Father.”


This is a substantial elaboration on the antiphon, but it grows from an awareness of that text's scriptural sources. When the title 'Emmanuel' appears in the Bible it comes accompanied by its interpretation, 'God with us', as for instance in St Joseph's dream in Matthew 1, which quotes Isaiah: "Now all this was done, that it might be fulfilled which was spoken of the Lord by the prophet, saying, Behold, a virgin shall be with child, and shall bring forth a son, and they shall call his name Emmanuel, which being interpreted is, God with us." So an interpretative impulse goes along with this word, and the Old English poet, noting that the name is Hebrew (Ebresc), accordingly turns it into English: God mid us.

This leads to the prophets who spoke of Emmanuel, and all those who lived before Christ's coming. The poem falls precisely, although unobtrusively, into two halves: the exact half-way point, the hinge of the whole poem, falls in the middle of the line bidon in bendum hwonne bearn godes - 'waited in fetters for when the Son of God...'  Just as to a medieval Christian time was sharply divided into 'before' and 'after' Christ's entry into human history (hence the A. D. system of dating, popularised in Anglo-Saxon England by Bede), so the poem is divided into the time of prophecies and the time of their fulfilment, bisected by the moment 'when the Son of God would descend to the desolate'.

In the second half of the poem the prophets are given a voice, speaking for all humanity, and figured as fettered prisoners appealing to the king for clemency. The imagery and language is all of kingship and of law, building on the antiphon's 'rex et legifer', and the vocabulary is typical of Old English Christian poetry: rodera weard 'Guardian of the Heavens', cyninga cyning 'King of Kings', alwealda 'All-Ruler', heofones heahcyning 'heaven's High King'. Christ is the son and heir: sunu meotudes 'Son of the Ruler', bearn godes 'Son of God', and wuldres æþeling 'Prince of Glory'. 'Ætheling' is the ordinary Old English word for 'prince' (as applicable to the sons of King Æthelred as the Son of God); and so Christ is implored to show mercy cynelice, 'in kingly manner'. 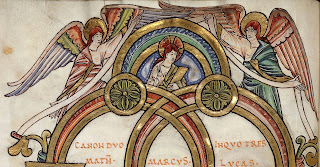 The images in this post are from a lavish Gospel-book, made in the first half of the eleventh century, which belonged to the monastery of Bury St Edmunds.
Posted by Clerk of Oxford at 8:35 pm