Alma redemptoris mater: As I lay upon a night 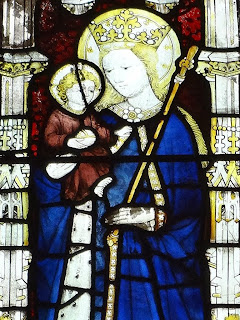 In Advent, the Marian antiphon sung at Compline is 'Alma redemptoris mater'. The following carol is not a translation of the antiphon, nor closely based on it at all, but it makes use of the phrase as its refrain - which seems a good enough reason to post it in Advent.

As I lay vpon a nyth
My thowth was on a berde so brith
That men clepyn Marye ful of myth,
Redemptoris mater.

Qwan Jhesu on the rode was pyth
Mary was doolful of that syth
Til sche sey hym ryse vprith
Redemptoris mater.

Jhesu, that syttyst in heuene lyth,
Graunt vs to comyn beforn thi sith
Wyth that berde that is so brith,
Redemptoris mater.

This carol survives in four manuscripts - in fact four of the chief manuscripts of medieval English carols: the 'Trinity Carol Roll' (Cambridge, Trinity College O.3.58), the 'Selden carol-book' (Oxford, Bodleian Library Arch. Selden. B. 26), Richard Hill's commonplace book (Balliol College 354), and BL Sloane 2593. So it was popular!  The version above is that of the Trinity Carol Roll, for no better reason than that I like it the best of the four. (They are all printed in Richard Greene, The Early English Carols (Oxford, 1977), pp. 147-8, should you want to compare them for yourself.) The Trinity Carol Roll is a strip of parchment containing thirteen carols with music, including 'There is no rose of such virtue'.

There are two nice things about this carol: first, that it uses one rhyme throughout, which you can imagine would be effective when heard sung; and second, that the refrain is incorporated into the sense of the verse, as does not always happen with Latin refrains in carols. This carol is truly macaronic, and it thus becomes a meditation on the title itself, 'redemptoris mater' (mother of the redeemer), and the process by which Mary acquired it. In the first verse the speaker already knows that 'men call' her by this title, and the rest of the carol demonstrates why: in the second verse Gabriel's message is phrased so as to give her the title for the first time, in the third verse she becomes the mother of God, and the fourth and fifth verses are concerned with the act of redemption - the death of Christ which makes him the redemptor and therefore Mary redemptoris mater. It's quite a skilful device; these carols are never as simple as they look at first glance. And there's one other pleasing touch: although the opening 'As I lay upon a night' is conventional for this kind of poem, it evokes a night-time setting for the speaker's musings which does seem particularly appropriate in this case, when the phrase around which the poem is built comes from a Compline antiphon. Into this solitary silence and darkness bursts Gabriel, speaking and 'with light', and the night is illuminated by its rhyming opposites, light (twice) and bright (three times), putting that one-rhyme structure to work very beautifully.

Here's a modernised version of the poem, preserving the rhymes. Berde, which appears twice, is too distinctive a word to replace with a modern equivalent; it's a rather romantic word, meaning 'lady, young woman' ('damsel' might have the right overtones in Modern English).

As I lay upon a night
My thought was on a berde so bright
Whom men call Mary, full of might,
Redemptoris mater.

To her came Gabriel with light
And said, ‘Hail be thou, blissful wight! [blessed creature]
To be called now art thou dight [prepared]
Redemptoris mater.'

At that word that lady bright
Anon conceived God full of might;
Then men knew well that she hight [was called]
Redemptoris mater.

When Jesu on the rood was pight [fastened]
Mary was doleful for that sight
Til she saw him rise up aright,
Redemptoris mater.

Jesu, who sittest in heaven's light,
Grant us to come before thy sight
With that berde that is so bright,
Redemptoris mater.

Now for a few recordings. First, the medieval carol being beautifully, meditatively sung by Oxford Camerata:
A later setting of the antiphon 'Alma redemptoris mater', by the English composer Peter Philips (d.1628):

And a modern setting of the medieval carol by Jamie W. Hall: