Whan Gabriel come with his gretynge
To Mary moder, that swete thynge,
He graunted and saide with grete lykynge,
Veni, redemptor gencium. 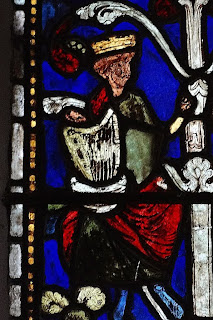 This carol is not, as you may already be able to tell, a translation of the Advent hymn 'Veni Redemptor Gentium', but it's nonetheless a very interesting text. It survives in one manuscript of carols, the 'Selden carol-book' (Oxford, Bodleian Library Arch. Selden. B. 26). You can punctuate the carol in a variety of ways, which changes the way you interpret it, but I understand it this way:

This world wonders above all things
How a maid conceived a king;
To give us all thereof showing, [to show us all how this could be]
Veni, redemptor gentium.

When Gabriel came with his greeting
To Mary mother, that sweet thing,
He confessed and said with great lykynge, [delight]
Veni, redemptor gentium.

Ambrose said in his writing
Christ would be in a maid dwelling;
To make true all that singing,
Veni, redemptor gentium.

And David said in his spellynge [prophecy]
That Truth would be in earth growing;
To us, redeemer of all things,
Veni, redemptor gentium.

Christ, crowned at our beginning,
Be with us at our ending;
Us to thy joy for to bring,
Veni, redemptor gentium.

This is a rather clever little carol. Like 'As I lay upon a night', which I posted the other day, it keeps to one rhyme throughout for the English lines, and it's properly macaronic; as I read it, the Latin refrain completes the meaning of each verse, so that for instance verse 1 presents a puzzle - 'how could a maiden conceive a king?' - and then asks for the solution: 'To show all us how this could be, come, Redeemer of the nations'. Such a strategy implies a certain comfort with the Latin and with this particular hymn, the ability to use the hymn as a starting point for a more general meditation. It begins by picking up on a line from the first verse of the hymn, miretur omne saeculum, which becomes (with a grammatical shift) this carol's first line: 'this world wonders above all things...' This carol is full of 'wonder', in both senses of the word: the wonder at which the world wonders is specifically the Virgin Birth, 'how a maid conceived a king', and where the hymn goes on to consider various other aspects and images of the Incarnation, this carol dwells, still wondering, on that one idea.

The neat interlinking of hymn and carol is particularly obvious in verse 3, a nice self-referential moment where the carol does a little dance with itself. The book where I found this carol suggests the third verse is a reference to St Ambrose's De institutione virginis, but it seems more likely to me that the reference is to the hymn Veni Redemptor Gentium itself, long attributed to St Ambrose, which begins 'Veni, redemptor gentium, / ostende partum Virginis'. The last two lines thus would mean 'To make the hymn [Come, Redeemer of the Nations] true, come, Redeemer of the nations'. Carols which reference Latin hymns often end up being partly about the fact of hymn-singing itself, and I think that's what we have here; it's smartly done.

This continues in the fourth verse, which makes reference to Psalm 85:11: veritas de terra orta est, 'truth springs forth from the earth'. Although spellynge means 'prophecy' (or more generally 'speech, utterance' - as in gospel), the psalms, too, are songs, and David, usually seen with his harp, makes a good accompaniment to the general singing. The three middle verses of the carol thus offer three different but parallel kinds of utterance which tell of a wondrous birth: Gabriel's greeting, Ambrose's writing, David's spellynge (all given the same place in the first line of their respective verses). The answer to these utterances, the explanation of these wonders, is found in the last line and in the advent for which it appeals: Veni, redemptor gentium. This citation of learned authorities is not an unusual device in carols; I'm reminded of the lovely 'Ecce quod natura mutat sua iura', which 'quotes' St Anselm alongside Isaiah and St Matthew. It does suggest a learned audience, or at least one which knew that St Ambrose wrote Veni Redemptor Gentium - a clerical audience, let's say. Monks and clerics did love their carols!

(For another recording listen to this Advent carol service from Trinity College, Cambridge - and then listen to the whole service, because it's glorious.)

Come, Thou Redeemer of the earth,
And manifest Thy virgin birth:
Let every age adoring fall;
Such birth befits the God of all.

Begotten of no human will,
But of the Spirit, Thou art still
The Word of God in flesh arrayed,
The promised Fruit to man displayed.

The virgin womb that burden gained
With virgin honour all unstained;
The banners there of virtue glow;
God in His temple dwells below.

Forth from His chamber goeth He,
That royal home of purity,
A giant in twofold substance one,
Rejoicing now His course to run.

O equal to the Father, Thou!
Gird on Thy fleshly mantle now;
The weakness of our mortal state
With deathless might invigorate.

Thy cradle here shall glitter bright,
And darkness breathe a newer light,
Where endless faith shall shine serene,
And twilight never intervene.

All laud to God the Father be,
All praise, eternal Son, to Thee;
All glory, as is ever meet,
To God the Holy Paraclete. 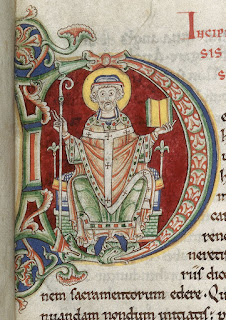 Lovely - many thanks again for all your advent posts