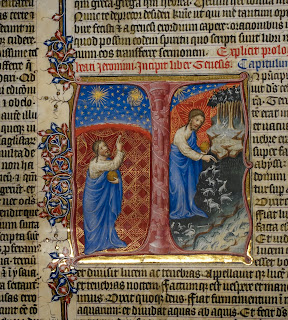 Among the Office Hymns for Advent is 'Conditor Alme Siderum', best known in translation today as 'Creator of the stars of night'. Intended to be sung in the evening, as the early dusk of a winter night descends, this hymn praises God as the creator of the stars - those stars which seem to shine so much more brightly in a cold and frosty sky. It draws a parallel between the darkness which envelops us each day and a yet deeper darkness, 'the world's evening hour', which Christ, bright as the sun, illuminates by his entry into the world.
This hymn dates back to the seventh century, and in the medieval church was used at Vespers. Here's the hymn sung in Latin:

And in English by Ely Cathedral Choir:


Creator of the stars of night,
Thy people’s everlasting light,
O Jesu, Saviour of us all,
Hear thou thy servants when they call.
Thou, grieving at the bitter cry
Of all creation doomed to die,
Didst come to save our ruined race
With healing gifts of heavenly grace.
Thou camest, Bridegroom of the bride,
As drew the world to evening-tide;
Proceeding from a virgin shrine,
The Son of Man, yet Lord divine.
At thy great name exalted now
All knees must bend, all hearts must bow;
And things in heaven and earth shall own
That thou art Lord and King alone.
To thee, O holy One, we pray
our judge in that tremendous day,
preserve us, while we dwell below,
from every onslaught of the foe.
All praise, eternal Son, to thee,
whose advent sets thy people free,
whom with the Father we adore,
and Spirit blest, for evermore.
The best-known translation today is from the 19th century, but the hymn was first rendered into English about 800 years before that. In an Anglo-Saxon hymnal from 11th-century Canterbury, the Latin hymn is accompanied by a version in English, not a poetic translation but a full word-by-word gloss. It begins 'Eala, ðu halga scyppend tungla' ('hail, thou holy creator of the stars') and contains some recognisable vocabulary, most notably in the third verse, where the hymn alludes to Psalm 18: Christ, like the sun, comes forth 'as a bridegroom coming out of the bridal chamber'. In Old English, this is 'brydguma of brydbure', 'bridegroom from bridal bower'.

Two years ago I posted a medieval English translation of this hymn written in the early fourteenth century by the Franciscan friar William Herebert. Herebert is an excellent translator and his version of the hymn is a lovely one; the opening phrase which renders God as 'holy wright' of the stars (starwright?) particularly sticks in the mind. In this post I want to look at two more Middle English translations of this hymn, from the end of the fifteenth century. This is by another Franciscan, James Ryman:

To whose grete myght, as it is right,
On knees boweth euery wight:
Alle heuenly and erthily thinge
Knowlege them meke to thy beknyng.

O holy lorde, we beseche the,
Of alle this worlde that iuge shall be,
Terme of oure lyfe defende vs froo
The darte of the fals fende, oure foo.

James Ryman was a master of carols: he left to posterity a manuscript containing no fewer than 170 (!) English carols and songs on all kinds of religious topics (the text is all online here). The carol form is deliberately simple and clear in its vocabulary, and this hardly needs glossing - but just in case, here's a literal version:

Having pity that this world should be spilte [destroyed]
Through the peril of deadly guilt,
Thou savedest it from great dolour
To the guilty giving succour.

This world drawing nigh unto night,
As spouse from bower, thou came aright
From the enclosure most cleanly dight [made]
Of mother Mary, virgin bright.

To whose great might, as it is right,
On knees boweth every wight:
All heavenly and earthly thing
Acknowledge themselves meek at thy beckoning. [command]

O holy Lord, we beseech thee,
Of all this world who Judge shall be,
Throughout our life defend us fro [from]
The dart of the false fiend, our foe.

Laud and honour, joy and virtue [power]
To God and to his Son Jesu,
And unto the Holy Ghost,
Both three and one, of mights most.

Most of the poems in Ryman's collection bear some relationship to a particular Latin text, but they vary quite a bit in how close that relationship is; often the English poem has only the loosest connection with the hymn it quotes. This, however, is a faithful translation - perhaps because it would be difficult to improve on the beauty of the original, with its stars and chambers and bridegrooms and the world's 'evening hour'. I like the run of rhymes in verses 3-4, seven rhymes on 'ight' in just six lines (or eight, if you count 'nigh'); and 'drawing nigh unto night' finds an appropriately alliterative English echo of the Latin's 'vergente... vespere'. In verse 3 this translation also preserves the hymn's quotation of Psalm 18 more precisely than the most common modern translation does: 'as spouse from bower' is the psalm and hymn's 'uti sponsus de thalamo'. 'In them hath he set a tabernacle for the sun, which cometh forth as a bridegroom out of his chamber, and rejoiceth as a giant to run his course...' 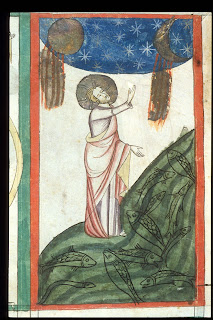 The sun of the psalm becomes in the hymn Christ, the Son - a piece of sacred wordplay not of course available to the Latin hymnographer, but one which writers have exploited to great effect since the earliest days of vernacular Christian writing in English. (See, for instance, the Anglo-Saxon poem based on 'O Oriens', which makes much of wordplay on the sun, the Son, the stars and the planets in an Advent context.) It's not surprising that this pun should also have occurred to the anonymous author of our second translation of 'Conditor Alme Siderum':

This is from the manuscript of hymn translations British Library, MS. Additional 34193, from which I've posted several pieces before. They are paraphrases and expansions more than strict translations, and very different in style from Ryman's simple carol diction:

O first Founder and heavenly Creator
Of stars shining in the spheres on high,
Everlasting light, guiding from error,
Christ, who would redeem us all and buy,
Incline to us thine ears of mercy,
Give gracious audience unto us all,
Who aye for mercy to thee clepe and call.

Through condoling pity in thy mercy pight
Against force of death this world embandownyng, [against the force of the death which had this world in thrall]
Providing remedy by thy grace and might,
Slumbering in sin and deathly languishing,
This world from death to life reconciling,
To guilty souls clear pardon and remedy,
Sealing thyself the charter of mercy.

This world revolving toward his end and fin, [close]
Endarkened by sin, approaching his evening,
O son of grace that pleased on us to shine,
And as a spouse from his chamber going,
From all damage our frailty ravishing, [carrying off]
Passing through the clear cloister consecrate
Of Mary mother virgin immaculate.

To whose mighty power and nonpareil,
All creatures owe their humble obeisance,
Of heavens high thou hast the governance,
This world, also, is through thy puissance,
The fiends who fell, for all their bobance, [pride]
Must thee obey, it may none other be;
Thus every thing for lord must acknowledge thee.

We pray thee, Lord of mercy and grace,
When thou shalt come and be our high justice,
Forget our guilt, forgive us our trespass.
Let not the fiend rejoice in his enterprise;
His deadly dart thy mercy vanquish;
On that dread day, good Lord, us all preserve
From thy mercy that we not fly nor swerve.

Laud, honour and thanks most reverent,
Endless joy, glory imperial
Be given to the Father omnipotent,
And to the Son in Godhead peregale, [fully equal]
And to the Holy Spirit celestial
More than men may write or discern
By times now and infinite eterne.

To me this version, with its stately Latinate diction, loses something of the hymn's concise power, but that's just a matter of taste. It's always interesting to see how differently two contemporary medieval translators could render the same text, and it's also worth bearing in mind that these translations are nearer to us in time (being just over 500 years old) than they were to their Latin source, which was written in the seventh century. This was an ancient hymn for them too, and part of their Advent as it is part of ours. 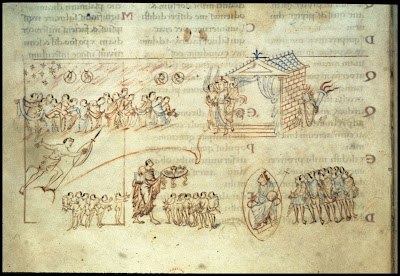 Christ the bridegroom coming forth from his chamber, in an illustration of Psalm 18 (BL Harley 603, f. 10v)
Posted by Clerk of Oxford at 3:37 pm

We sang ‘Conditor’ yesterday at Evensong, but the translation in our Hymnal, and I with it until now, missed the bit about Christ as spouse coming forth from his chamber (which will be mirrored at Candlemas – at the other end of the Incarnational season – when one of the antiphons at the Procession exhorts, ‘Adorn your bridal chamber, O Zion, and receive Christ, the King’).

I’ve recently stumbled on your blog and would like you to know how much I’m enjoying it. I think what’s most attractive and consistent about your writing is the sense of rootedness that comes across: you seem wholly, and I must say enviably, at home in, with, and among the things you write about (language, literature, land, culture, customs, church[es], history). This leads me, being of melancholic temperament, to brood on the alienation from nearly all those things that is my experience as a native of that nowhere, colonial suburbia, and which must be the lot of most people in this weary world of ours – but I’m nevertheless encouraged by your writing to look for beauty and make connections wherever possible, as perhaps you’ve made it a habit to do. Thanks for that.

Thank you - such thoughtful comments mean a great deal to me. I write about the things I know best and love most because I want other people to know and love them too. Although I'm fortunate enough to live in a beautiful place, I nonetheless (also being of a melancholic temperament) do very much know what you mean about that feeling of alienation. Storing up beauty here is my way of dealing with it, and I'm glad it has encouraged you.