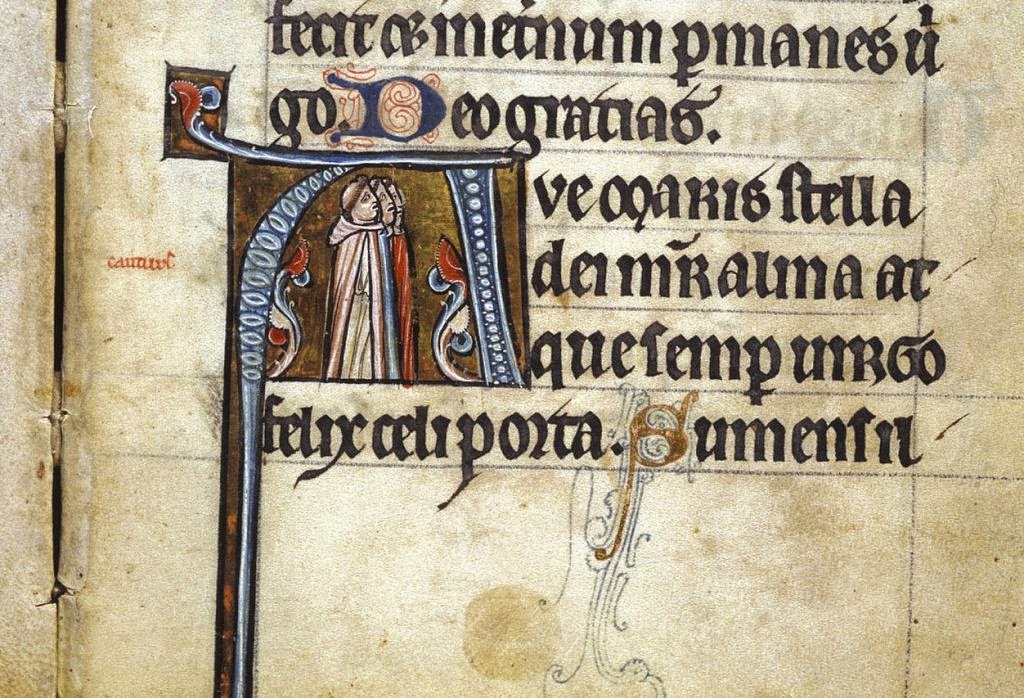 The Vespers hymn often sung on the Feast of the Immaculate Conception (8 December) is 'Ave Maris Stella', which in the early fourteenth century was translated into English by the Franciscan William Herebert as follows:

Hayl, Levedy, se-sterre bryht,
Godes moder, edy wyht,
Mayden euer vurst and late,
Of heveneriche sely gate.
Thylk "Aue" that thou vonge in spel
Of the aungeles mouhth kald Gabriel;
In gryht ous sette and shyld vrom shome,
That turnst abakward Eves nome.
Gulty monnes bond vnbynd,
Bryng lyht tyl hem that beth blynd.
Put vrom ous oure sunne
And ern ous alle wynne.
Shou that thou art moder one,
And he vor the take oure bone,
Þat vor ous thy chyld by com,
And of the oure kunde nom.
Mayde one, thou were myd chylde,
Among alle so mylde;
Of sinne ous quite on haste,
And make ous meoke and chaste.
Lyf thou gyf ous clene;
Wey syker ous ȝarke and lene
That we Jesus yse,
And ever blythe be.
To Vader, Cryst, and Holy Gost beo thonk and heryinge;
To threo persones and o God, o menske and worshypinge.

This is one of the loveliest hymns in praise of Mary, though there is plenty of competition for that title - Mary has probably inspired more poetry than any other woman who ever lived. This hymn, though so short, is both beautiful and theologically ambitious: there are a lot of ideas and images packed into these concise lines. We have the image of Mary as 'sea-star', the guide to all of us travelling through the waves of this world, as 'gate of heaven', the woman who opens for humanity the door to another world, and as liberator of prisoners and healer of the spiritually blind. The hymn also alludes to the widespread medieval idea of a link between humanity's two mothers, Mary and Eve: Mary's consent to God, represented by her 'Ave' to the angel, reverses Eve's very name (Eva, in Latin), and begins to undo all the loss, grief and sin it symbolises.

I find Herebert's version utterly charming, and it has a lovely sound when read aloud (try it - you'll understand more than you expect - or listen here). It uses some of my favourite words from early English religious vocabulary, most of which did not make it into Modern English: edy (from Old English eadig, 'blessed'), sely (from sælig, 'blessed, fortunate', which in its later sense 'harmless, innocent' gave us Modern English 'silly'), wynne ('joy', also the name of an Old English rune and letter), blythe ('joyful'), and gryht (from Old English grið, 'peace, truce', which came into English from Old Norse, one can only assume in the context of Vikings negotiating peace-treaties!). Even the compound 'sea-star' translating the Virgin's title stella maris is attested in Old English, from a text of c.1050:

[Sea-star she is called, because a star in the night shows to seafaring men where is east and west, where south and north; and just in this way through the holy maiden St Mary the right path to eternal life was shown to those who long had sat in darkness and in the shadow of death and among the troubled waves of the sea of this world.]

Because of this thoroughly English vocabulary there's hardly a word in Herebert's translation which would not have been understood three centuries before he wrote, around the time when the Feast of the Conception of the Virgin was first being celebrated in late Anglo-Saxon England. The Canterbury monk and historian Eadmer, staunch defender of the doctrine of the Immaculate Conception and author of an influential treatise on the subject, would have found this recognisably his own language - perhaps appropriately for a feast he regarded as peculiarly English. (There actually is a surviving Old English gloss of this hymn in an eleventh-century Canterbury manuscript, if you'd like to compare them.) To remove these words takes away the character of Herebert's translation, so I've kept them here, at the risk of archaism:

Hail, lady, sea-star bright,
God's mother, edy wight [creature]
Maiden ever, first and late,
Of heaven's realm the sely gate.
The 'Ave' thou received in spell [message]
From the angel's mouth called Gabriel
In grith us set and shielded from shame,
And turneth backward Eva's name.
Guilty men's bonds unbind,
Bring light to them who are blind.
Put from us our sin
And earn for us all wynne. [joy]
Show that thou art mother alone
And before him take thou our bone [petition]
Who for us thy child became
And of thee our kind name. [took our nature]
Maid alone, thou wert with child,
Among all so mild;
Of sin release us in haste,
And make us meek and chaste.
Life give thou us clean, [pure]
A safe way prepare, and lene [grant]
That we Jesus see
And ever blithe be.
To Father, Christ and Holy Ghost be thanks and praising,
To three persons and one God, one honour and worshipping. 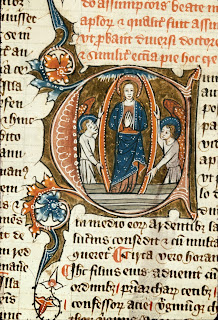 It's interesting to compare Herebert's 'sea-star bright' to this very different poem in praise of the Virgin:

All haile, lady, mother, and virgyn immaculate,
Haile, Mary most precious, that bare our savyour Jesu;
Haile, clarified cristall, haile, wife mundificate,
Haile, rote of grace, our joy thow did renewe,
For the Holy Gost did clerely in the yssue.
Our soles for lacke had ells perresshed sore
Nere throgh the helpe of our highe redemptour.

Haile, true chast virgyn and mother immaculate,
Whose pure purificacion to us was purgacion:
Haile, replete with all virtue angelicate,
Whose celestiall hye ascendaunte Assumpcion
Was oure gret joye and glorificacion.
Wherfore, dere lady, solistrice be for grace,
That we with thy son in heyven may have a place.

This poem is fifteenth-century high style at its grandest, very different from Herebert's homely language - all those polysyllabic Latinate words, as if the longer a word is the more meaningful! It's impressive stuff, a tour-de-force of its genre. It comes from the manuscript British Library, Additional 20059, and like most Middle English lyrics is anonymous. Again, to turn the Latinized language into modern equivalents loses some of the spirit, so I hope you'll forgive a little more archaism:

All hail, lady, mother, and virgin immaculate,
Hail, Mary most precious, that bare our Saviour Jesu;
Hail, clarified crystal, hail, wife mundificate, [pure woman]
Hail, root of grace; our joy thou didst renew,
For the Holy Ghost did clearly in thee issue.
Our souls for lack had else perished sore
If not for the help of our high redemptor.

All hail, whose solemn glorious Conception,
Full of glory and high joy triumphant,
Both celestial and terrestrial give laud with jubilation
Of new joy and gladness with solace incessant.
All hail, whose Nativity to us is solempnysaunte [a solemn festival]
Ferens lucem ut Lucyfer, lux oriens, [Bearing light like Lucifer, light of the east]
Diadem angelical, verum solem preveniens. [going before the true sun]

All hail be thy meekness, sine viro fecunditas [fruitful without man]
Whose amiable Annunciation to us was redemption.
Joy therefore be to thee, tu summa suavitas, [thou, most sweet]
And glorified be the hour of thy Incarnation,
By which we avoid the infernal damnation.
So sweet was the ground in whom Christ himself planted
O mater most illuminate, we might not thee have wanted. [we could not have done without thee]

Hail, true chaste virgin and mother immaculate,
Whose pure Purification to us was purgation:
Hail, replete with all virtue angelicate,
Whose celestial high ascending Assumption
Was our great joy and glorification.
Wherefore, dear lady, solicitress be for grace,
That we with thy son in heaven may have a place. 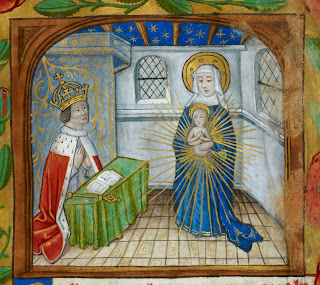 The Immaculate Conception of the Virgin, being observed by Henry VII (BL Royal 2 A XIX)
Posted by Clerk of Oxford at 11:30 pm