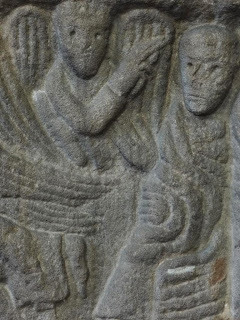 In medieval English usage this was the eighth and last of the O Antiphons, 'O Virgo virginum' (lines 71-103 of the Old English Advent lyrics).

O Virgin of virgins, how shall this be?
For before you there was none like you, nor shall there be after.
Daughters of Jerusalem, why do you marvel at me?
What you behold is a divine mystery.

O joy of women, beyond the glory of heaven,
most noble virgin through all the corners of the earth
of whom sea-dwellers ever heard tell,
explain to us the mystery which came to you from the skies,
how you ever conceived a pregnancy,
the bearing of a baby, when you never knew
bed-companionship according to the ways of men.
Truly, we have not heard of such a thing
ever occurring in former days,
as that you, with special grace, conceived in this way,
nor should we ever expect that event
to occur again in time. Indeed, Truth in you
gloriously dwelt; now you the Glory of heaven
bore in your womb, and your great virginity
was not breached. Just as all the sons of men
sow in sorrow, so do they reap,
bearing children in pain. The blessed maid spoke,
forever full of triumph, holy Mary:
“What is this wondering which amazes you,
son and daughter of Salem, so that, mourning,
you bemoan your grief?
Curiously you ask how I kept my virginity,
held my wholeness, and also became the mother
of the glorious Ruler’s Son. But that mystery is not
made known to men, though Christ revealed
in David’s dear daughter
that the sin of Eve is entirely put aside,
the curse averted, and the humbler sex
is glorified. Hope is conceived,
so that blessing may now with both alike,
with men and women, ever throughout eternity
in the heavenly joy of the angels
with the Father of truth, always dwell.”

Like the antiphon, this poem is imagined as a dialogue between Mary and the women of Jerusalem, but although Mary addresses 'the son and daughter of Salem' the questioner who addresses her is all of 'us': arece us þæt geryne þæt þe of roderum cwom, 'explain to us the mystery which came to you from the skies'. We are 'sea-dwellers', a kenning for mankind which seems to refer to the idea of a sea-voyage as a metaphor for human life, an exile's journey through stormy seas to the firm land of the heavenly home - as in 'The Seafarer', or the end of Christ II:

Now it is very much like this: as if we were sailing
in ships across cold water, over the sea-waves,
beyond the wide ocean in water-steeds
traversing the floods. The waters are perilous,
the waves immeasurable, amid which we journey here
through this frail world, the stormy oceans,
across the paths of the deep. Dangerous was the life
before we came to land
across the rough waves. Help came to us
that we might be led to a haven of healing,
God's Spirit-Son, and gave us grace
that we might find, by the ship's side,
where we could moor our water-steeds,
our ancient wave-horses securely anchored.

And Mary, for such mariners, is the star of the sea (Old English sæsteorra):

'Sea-star she is called, because a star in the night shows to seafaring men where is east and west, where south and north. And just in this way through the holy maiden St Mary the right path to eternal life was shown to those who long had sat in darkness and in the shadow of death and among the troubled waves of the sea of this world.'

The first part of the poem marvels at the uniqueness of Mary, her difference from other women, but when Mary herself speaks in the second part she emphasises her kinship with all women: 'Christ revealed in David’s dear daughter that the sin of Eve is entirely put aside, the curse averted, and the humbler sex is glorified...' 'Hope is conceived' has just the same double meaning in Old English as in Modern English; the verb is onfon, which means 'to receive' but also 'to conceive a child'. There are a number of places in this poem where Christ is referred to by abstract nouns: he is the 'hope' which is conceived, the 'truth' and the 'glory of heaven' which dwelt in Mary, and the 'blessing' which will dwell with all men and women (werum ond wifum), for ever throughout eternity, in þam uplican engla dreame, 'on high in the joy of the angels'. 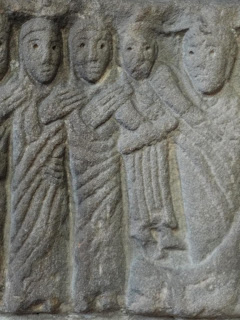 The images in this post are of an extraordinary Anglo-Saxon carving, the Wirksworth stone. This coffin lid, found in Wirksworth in Derbyshire and probably made in the seventh century, depicts the life of Christ, including the Annunciation (top) and Mary holding the Christ-child.
Posted by Clerk of Oxford at 8:54 pm

Merry Christmas and Happy New Year, and once again many thanks for all your wonderful Advent posts.