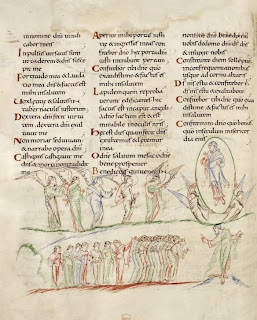 This is the first of the antiphons in the Exeter Book (actually the very first poem in that precious manuscript), and the opening is lost. It comprises lines 1-17 of the Advent lyrics.

O King of the nations, and their desire,
the cornerstone who makes both one:
Come and save the human race
which you fashioned from clay.


...the king.
Thou art the corner-stone which the builders long ago
rejected from the building. It is well-fitting for thee
that thou become the headstone of the glorious hall,
and bring together the wide walls
with bonds fixed fast, stone unbroken,
so that throughout the cities of earth the sight of all eyes
may marvel forever at the Lord of glory.
Reveal now through skillful craft thine own work,
steadfast in truth, victory-bright, and all at once leave
wall standing against wall. Now is it needful for this work
that the Craftsman come, and the King himself,
and mend what is now in ruins,
the house beneath its roof. He created that body,
the limbs made of clay; now shall the Lord of life
save the weary multitude from its enemies,
the wretched ones from terror, as he has often done.

'Work' here can be interpreted as both 'deed' and 'building-work', and that double meaning is at the heart of a poem full of subtle wordplay. The first few lines pick up the antiphon's allusion to Psalm 118, 'the stone which the builders rejected has become the cornerstone', but from this point on the Anglo-Saxon poet develops the idea within the context of his own poetic tradition. It forms a remarkable counterpart to two of the best-known Old English poems, also contained in the Exeter Book, 'The Wanderer' and 'The Ruin': both describe the windswept ruins of a great city, walls standing battered by the elements, as a symbol of decay and destruction in the transient human world. This poem, rather beautifully, offers the opposite: Christ as the cornerstone of a firm-fixed wall, as the craftsman who will repair the ruin, and as the lord who will defend it from its enemies.

The hall is a central image of human society in Anglo-Saxon poetry; the classic statement of this idea is Bede's story of the sparrow, where the hall represents everything warm and good about human companionship and the world we know. But as the poem goes on it gradually becomes clear that the ruin to be repaired is not a hall, but the human body. The image of the body as a house is an ancient one, and here the body and the hall are merged into one; we are the 'building-work'. Christ is the heafod of this building - a word which means both 'head-stone' and 'head' in the literal and metaphorical senses. 'The house beneath its roof' is easily transferable to the body, when you remember that hrofe 'roof' could refer to the roof of the mouth or the ceiling of the sky; and also that in Old English feorhhus, 'spirit-house', is a kenning for the body. And hall and body both have 'limbs made of clay', in a lovely moment of ambiguity inspired by the antiphon, which says that man was formed de limo, 'of clay'. Latin limus is cognate with Old English lim, læmen - a building material, as in 'lime and mortar' - which also happens to sound like Old English leomu 'limbs'. So these are leomo læmena, 'limbs of lime', which both a body and a building might truly be said to have.

In the final lines we see Christ defending the hall he has built, like Beowulf keeping night-watch in Heorot while Grendel stalks the moors outside. The 'weary multitude' to be saved is a heap, which means a crowd, people, but also what modern 'heap' does: a pile, as of stones. When the Craftsman comes the human body, reduced to a pile of rubble, is to be built up again into a glorious and unassailable hall. 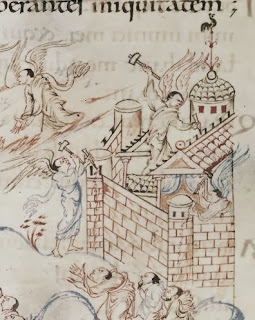 The images in this post are from an illustrated psalter produced at Canterbury early in the eleventh century. I chose the illustrations of Psalms 118 ('the stone which the builders rejected has become the cornerstone') and 102 (angels rebuilding the city of Sion).
Posted by Clerk of Oxford at 8:00 pm