Then after thirteen and ten nights [i.e. on 24th June]
the thegn of glory, the Prince's darling,
John, was born in days of old;
we keep that feast at Midsummer, with much honour.

On this Midsummer feast of the Nativity of John the Baptist, here's an extract from Ælfric's homily for the day. It can be read in full here.

'The holy church celebrates the birth-tide of three people: of the Saviour, who is God and man, and of John his herald, and of the blessed Mary his mother. Of other chosen people, who have gone to God's kingdom through martyrdom or other holy merits, we celebrate as their birth-tide their last day, which, after the fulfilment of all their labours, bore them victorious to eternal life; and the day on which they were born to this present life we let pass unheeded, because they came here to hardships and temptations and various dangers. The day is worthy of memory for God's servants which sends his saints, after victory won, from all afflictions to eternal joy, and that is their true birth - not tearful, as the first, but rejoicing in eternal life.

But the birth-tide of Christ is to be celebrated with great care, through which came our redemption. John is the ending of the old law and the beginning of the new; as the Saviour said of him, "The old law and the prophets were till the coming of John." Afterwards began the preaching of the gospel. Now, because of his great holiness, his birth is honoured, as the archangel promised his father with these words, "Many shall rejoice in his birth-tide." Mary, parent of God, is like to none other, for she is maiden and mother, and bore him who created her and all creation: therefore she is most worthy that her birth should be honourably celebrated...

It is not without meaning that the herald's birth at this season came to pass when the earthly day is waning, and the Lord's birth when it is waxing. This meaning John himself revealed with these words: "It is fitting for Christ that he should increase, and for me that I should decrease." John became known to people, through his famous actions, earlier than Christ was, because he did not reveal his divine power before he had lived thirty years in human nature. So it seemed to the people that he was a prophet, and that John was Christ. But then Christ made himself known through great signs, and his fame waxed throughout all the world, that he was true God, who had previously seemed a prophet. Truly John's fame was waning, because he was recognised as a prophet, and herald of the heavenly Prince, who a little while before was believed to be Christ by uncertain guesses. This waning is betokened by the waning day at the season of his birth, and the increasing day at the Saviour's birth signifies his increasing power according to his human nature.'

They were, as Ælfric says, anes geares cild, 'the children of one year'. After Midsummer se woruldlica dæg wanigende bið, the earthly day is waning, and it goes on waning until the winter solstice brings Earendel and the birth of the sun. 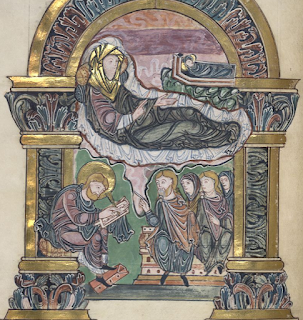 The Benedictional of St Æthelwold, produced a little earlier in the tenth century than Ælfric's sermon, depicts the birth and naming of John the Baptist (BL Additional 49598, f.92v): above, Elizabeth with the baby; below, Zechariah writes 'His name is John'.