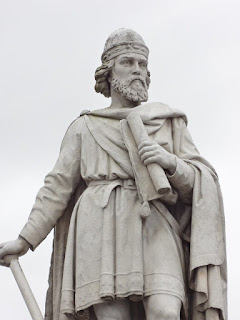 Alfred the Great, from Wantage

I've recently begun a new Twitter project, called Old English Wisdom. The idea is to tweet proverbs, maxims, and other miniature bits of wisdom and advice from Old English poetry and prose, anything which falls under a very broad definition of 'wisdom'! Old English literature abounds in such pithy statements, ranging from wry proverbs about mead-drinking and money to practical advice about moderate behaviour, from a warrior's code of conduct to profound reflections on how one acquires wisdom and the benefits it can bring. There's almost a limitless amount to tweet, and it seemed to me it might be an interesting way to combine the popular fascination with the Old English language (which never ceases to take me by surprise) with an opportunity to post about some texts which are not as well-known as they deserve to be.

This has involved spending my free time re-acquainting myself with some Old English texts I haven't read in a while. It throws up surprises, not always directly useful for the project, but thought-provoking in other ways; when you go looking for wisdom, you find all kinds of things. This week, for instance, I've been re-reading some of the translations credited to Alfred the Great, who would be the patron saint of Anglo-Saxon wisdom, if it had such a thing. Among all his other achievements as king, Alfred arranged for the translation of - or perhaps even translated himself - a range of religious and philosophical texts into English, many of which have interesting things to say about how wisdom is to be gained and used: they include (among other works) Gregory the Great’s Pastoral Care and Dialogues, Boethius’ Consolation of Philosophy, and Augustine’s Soliloquies. As Alfred's famous Preface to the Pastoral Care explains, he believed that learning in England had gone into serious decline in his own days, and that to restore it would be to repair the 'wealth and the wisdom' of the kingdom both together. 'Consider what punishments came upon us in this world when we neither loved wisdom in any way ourselves, nor passed it on to others,' he says; and his translation project explicitly seeks wisdom as a means of finding a way through such serious worldly troubles as Viking invasion. As a result of all this there's a good bit of myth-making about Alfred's wisdom, and by the end of the Anglo-Saxon period he was already regarded as an image of the wise king, that ever-potent symbol. His very name prepared him to be an expert in ræd ('counsel, advice'), and later in the medieval period he was spuriously credited as the omniscient author of a collection of proverbs, cited in texts like The Owl and the Nightingale as an impeccable authority, England's own Solomon. So I picked him as the face of this Twitter project, as imagined (above) by a statue in Wantage, his birthplace, which offers a very Victorian iteration of the Alfred myth: 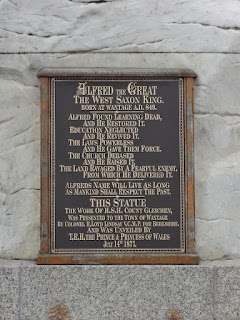 So the Alfredian texts were a natural place to go in search of wisdom; and passages which are too long to tweet are probably going to end up on this blog! Here, for instance, is an extract from the Old English translation of Augustine's Soliloquies, which is one of several extended additions to the source (the text is from here, with my translation).

Consider now, how many men seek the king's court when he is in town, or at his assembly, or with his army; and do you think that they all come there by the same road? I think, in fact, that they come by many different roads. Some come from afar, and have a very long and very bad and very difficult road. Some have a road which is very long and very direct and very good. Some have a very short road, which is nonetheless dark and narrow and dirty. Some have a short and smooth and direct road. Yet they all come to the same lord, some with ease, some without ease.

They do not come there with equal ease, nor are they equally at ease when they are there. Some are in great honour and in more comfort than others, some in less, some almost without any, except for the one whom he loves. So too it is with wisdom. Every one who desires it and eagerly asks for it may come to it and dwell in its household and live close to it, but some are nearer to it, some further away. So it is in every king's court: some are in the chamber, some in the hall, some on the threshing-floor, some in the jail-cell; yet they all live there by the favour of one lord, just as all people live under one sun and by its light see all that they see. Some see very sharply and clearly, some can only see anything with great difficulty; some are stark blind, yet still enjoy the sun. And just as the visible sun gives light to the eyes of our body, so wisdom gives light to the eyes of our mind, that is, our understanding. 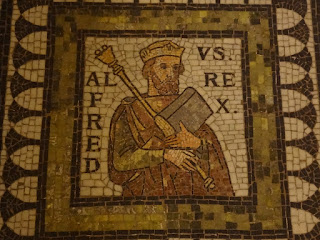 The speaker here is 'Reason', addressing the Augustine persona, who is (perhaps) the Alfred persona too. The funny thing about Alfred later being mythologised as such a great sage is that if we can locate his voice anywhere in his translations it would be as the learner, not the teacher - he is no Solomon, but a humble, anxious searcher after wisdom, who is not at all sure he will find it. Here Reason offers a very apt metaphor to his royal pupil, and and this is an appropriate passage, of course, for a text sponsored by a king: the king in his court is implicitly, flatteringly, compared to the sun and to wisdom itself. His are (royal 'favour', but in a broad and positive sense) extends like the rays of the sun, throughout his household and his estate from private chamber to jail-cell and beyond. It's worth remembering that the maintenance of good roads was the kind of task a responsible medieval king might take an interest in - as Alfred himself did - and so perhaps all the many roads which lead to his court are also under his jurisdiction, under his are, as much as the people travelling on them. The king's roads are the king's responsibility, and they all lead to the same place.

This extended metaphor, lovely as it is, is perhaps a long roundabout way of expressing an idea we might convey with a simple proverb: 'all roads lead to Rome'. But although there are no proverbs in this passage, it draws on the traditional language of wisdom literature; it provides, for instance, three nice examples of the sum... sum... lists which frequently appear in Old English prose and poetry to illustrate the varying states and conditions of human beings, the many different ways they can live and die. I quoted two examples at the end of my last post, lists of the various gifts of human skill. The most famous instance is perhaps this passage in The Wanderer:

The wise hero must perceive how terrible it will be
when all this world's wealth lies waste,
as now in various places throughout this earth
walls stand blown by the wind,
covered with frost, the buildings snow-swept.
The halls decay, the ruler lies
deprived of joys, the troop all dead,
proud by the wall. Some were taken by war,
carried on their way, one the bird bore off
across the deep sea, one the grey wolf
shared with death, one the sad-faced man
buried in an earthy grave.

A list of all the ways people can die - this is the kind of thing which leads to wisdom literature being frequently cited as one of the aspects of medieval culture which modern audiences find especially challenging, or, worse, especially dull! I've heard this said many times, but I'm not sure it's actually true, and it was partly to test this assumption that I began my little Twitter experiment. The internet has fostered a boom in new kinds of wisdom literature, in the form of 'inspirational quotes'. These sayings walk a fine line between the profound and the banal, and as so often happened with medieval wisdom, they are often spuriously attributed to a famous name who can lend the words a bit of cachet (apparently this phenomenon has a name: 'Churchillian Drift'). It's easy to make fun of this, but it does make me wonder about the relationship between medieval wisdom and modern self-help. Most of the hundreds of people who've started following 'Old English Wisdom' in the past three weeks are not academics or medievalists, nor even people with a literary or academic background. What is it they find so attractive about Anglo-Saxon wisdom poetry? What is the appeal of the obvious statement, the truism, when expressed in language which is both familiar and strange (whether that's because it's in Old English, or because it follows the language and rules of poetry)?

In some ways the answer is obvious. Wisdom of this sort is not theoretical, but eminently practical wisdom: it is meant to console you and guide you through life. The preface to the Old English translation of Boethius' Consolation of Philosophy (called in Old English froferboc, 'book of comfort') claims that Alfred translated it amid 'the various and manifold concerns with which he was often busied, both in mind and body'. Boethius' work was immensely popular in the Middle Ages, and it's not hard to understand the appeal of that kind of wisdom in unsettled times to a busy and anxious mind. Of course Boethius is much more profound than Twitter's plethora of 'inspirational quotes', but it's a continuum. People seek those, too, because they want or need inspiration, encouragement, guidance, support; however banal these popular sayings may seem, they represent a kind of search for wisdom. There are many roads to wisdom, and some of them go by very circuitous routes; but þeah cumað æalle to anum hlaforde.
Posted by Clerk of Oxford at 10:55 am