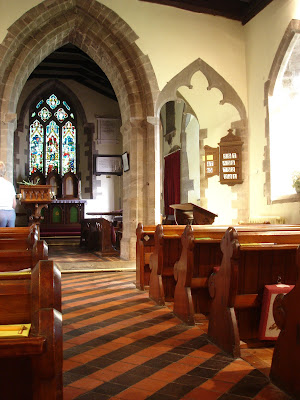 Credenhill, Herefordshire, where Thomas Traherne was rector from 1657-1666
The World is unknown, till the Value and Glory of it is seen: till the Beauty and the Serviceableness of its parts is considered. When you enter into it, it is an illimited field of Variety and Beauty: where you may lose yourself in the multitude of Wonders and Delights. But it is an happy loss to lose oneself in admiration at one's own Felicity: and to find God in exchange for oneself: Which we then do when we see Him in His Gifts, and adore His Glory.

I have a particular, irrational, instinctive fondness for the word 'felicity'. It may be only one of many words for happiness, but to me it signifies the very highest kind of transcedent, ineffable, overflowing joy. It has a tint of archaism which appeals to me: it is at the same time typically Middle English (it's used by Chaucer many times), and Metaphysical (a favourite and characteristic word of Thomas Traherne), and Victorian (used in a weaker, but elegant sense). It's also one of my favourite names (though - or perhaps because - I've never known anyone called that, either in real life or in fiction). And so I am especially attracted to St Felicity, whose memorial is today. SS Perpetua and Felicity are among the saints mentioned in the Canon of the Mass; everything else I know about them comes from that encyclopedia page, so I don't really know what this post is about. Except, perhaps, that sometimes a word or a thought comes to mean more than it strictly ought to mean, as if it is leading to something; as if one day we will look back and understand how all the scattered instances which kept cropping up, for no reason and apparently with no meaning, were not random but patterned, tracing a path through life like a golden thread.
Posted by Clerk of Oxford at 1:09 pm

Yes, an intriguing word. I am reminded of Spenser's text, set by W H Harris. Perhaps your choir sings it.

Faire is the heaven where happy soules have place
In full enjoyment of felicitie;
Whence they do still behold the glorious face
Of the Divine, Eternall Majestie;

I'd forgotten that one - thanks for the reminder.