Candlemas and The Carol of King Cnut 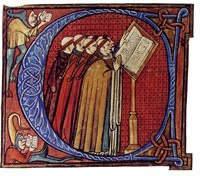 This post features a combination of two favourite themes of this blog: Christmas carols, and King Cnut. But it also celebrates Candlemas. Let me explain.

A few weeks ago I posted about a story of Cnut's visit to Ely Abbey, where the king had to follow a peasant across the ice in a cart when the fens proved impassable by boat. According to the twelfth-century history of the abbey, Cnut was in the habit of visiting Ely to celebrate the Feast of the Purification, aka Candlemas, aka today. If you will go visiting Fenland abbeys in February, you get weather problems - but sometimes Cnut actually made it to Ely. And on one occasion he wrote a song about it! Well, not really. I mean, he probably didn't write it. But there is a song, and it's one of the earliest songs in Middle English, and there's a lovely story about it.

"King Cnut was making his way to Ely by boat, accompanied by Emma, his queen, and the nobles of the kingdom, desiring to celebrate solemnly there, in accordance with custom, the Purification of St Mary, starting from which date the abbots of Ely are accustomed to hold, in their turn, their position of service in the royal court. When they were approaching the land, the king rose up in the middle of his men and directed the boatmen to make for the little port at full speed, and then ordered them to pull the boat forward more slowly as it came in. As he 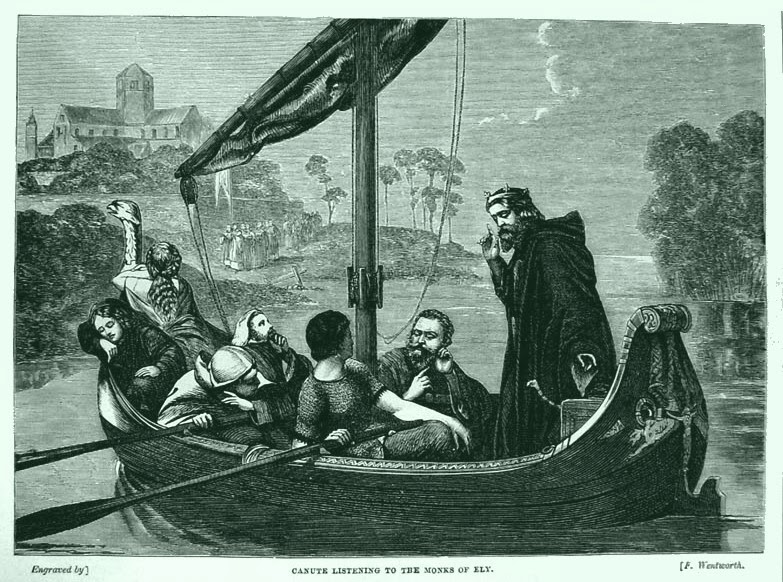 I can't remember where I got this picture so I apologise for not knowing the source - but it makes me laugh every time I look at it...

As you can see, it isn't a Christmas carol (or really a religious song at all), but a 19th-century Dean of Ely, Charles William Stubbs, decided to turn it into one. Thus he wrote 'The Carol of King Cnut', which was set to music first by T. Tertius Noble (see below) and again by Benjamin Britten as part of his 'Christ's Nativity' carol series. In honour of the last day of the Christmas season, then, enjoy a last carol, courtesy of Ely, Dean Stubbs, and King Cnut: 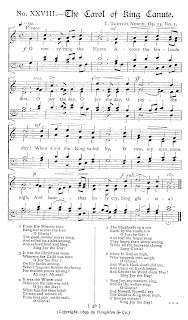 O merry rang the hymn
Across the fenlands dim;
O joy the day!
When Cnut the king sailed by,
O row my men, more nigh
And hear that holy cry,
Sing Gloria!

From Ely Minster then
Rang out across the fen
O Gloria!
The good monks' merry song
That rolled its aisles among,
And echoed far and long :
Sing joy the day!

It was the Christmas morn
Whereon the child was born
(O joy the day!)
On lily banks among
Where fragrant flowers do throng
For maiden posies sprung?
Ah nay! ah nay!

It was the winter cold
Whereon the tale was told
(O joy the day!)
What hap did then befall
To men and women all
From that poor cattle stall,
O Gloria!

The shepherds in a row
Knelt by the cradle low,
O joy the day!
And told the angel song
They heard, their sheep among,
When all the heavenly throng
Sang gloria!

Glory to God on high,
Who bringeth men anigh,
O Gloria!
And war's black death did ban,
And peace on earth began
And Christ the Word made man!
Sing joy the day!

You can listen to Benjamin Britten's lively setting of 'The Carol of King Cnut' here.
Posted by Clerk of Oxford at 12:03 am

This was delightful! Thank you for cross-linking it to Candlemas 2015!

Is there any historical source for the crucifix on the stern of the boat in the Victorian illustration?!

None whatsoever, I should think!

I know you posted this ages ago, but I thought you should know that the Mediaeval Baebes did a very catchy version of this song as well: https://www.youtube.com/watch?v=uMA6c3S-g5A

Source for engraving: I have since found a reference to "Frederick Wentworth (fl.1865-94). RA Collection.
London based wood engraver, worked with Edward Whymper and William Cranston." Confused on Wiki with Jane Austen character. No results for works held at RA.