I appear to have fallen down rather badly on my planned twelve days of carols, but let's just move swiftly on and pretend we haven't noticed. This carol is by James Ryman, a Franciscan who lived in Canterbury in the late fifteenth century; he wrote a number of carols, including 'Farewell Advent'. That's a light-hearted, playful carol; today's is more learned, but this Christmas season I've come to appreciate just how interesting it is that no subject seems to have been thought too solemn or too arcane to be made into a carol (cf. the O Antiphons).

Behold and see how that nature
Changeth her law: a maiden pure
Shall bear a child (thus saith scripture),
Jesus, our Saviour.

Behold, the fleece of Gideon
Waxed wet, that no dew fell upon;
Behold, the rod of Aaron
Unmoisted bore a flower.

The prophet Isaiah saith thus:
"A maid shall bear a child to us
Whose name shall be called Jesus,
Our help and our succour.

A rod shall grow out of Jesse root
Whereof a flower shall ascend full sweet."
This flower is Christ, our health and bote,
This rod, Mary, his bower.

Saint Matthew saith in the gospel,
"A maid shall bear Emmanuel,
That is to say, God with us to dwell,
That lovely paramour."

Forsooth, to us is born a child;
A son is given to us full mild,
Of virgin Mary undefiled
To ease our great langour.

This is the stone cut of the hill,
Christ born of Mary us until, [unto]
Without sin in thought, deed, and will
To save us from dolour.

This child shall be the Prince of Peace,
Whose kingdom shall ever increase,
Whereof the peace shall never cease
But increase day and hour.

Saint Anselm saith, "So Christ did pass
Through Mary mild, as his will was,
As the sun-beam goeth through the glass,
That maid full of honour."


The Latin refrain is from a hymn, Ecce quod natura, but the verses aren't based on the hymn but on very common ideas and imagery about the incarnation - the Virgin as the fleece of Gideon and rod of Aaron, and the root of Jesse, of course. The image in the last verse, of Christ as the sunbeam passing through the glass, is also a very common simile, and one that I love (compare this carol, and this poem, and I posted about the idea in romance here), so I was delighted to see it attributed here to my beloved St Anselm. The attribution is not strictly accurate, in that the image doesn't appear in Anselm's works, but it was 'a simile much used in the school of Anselm', according to R. W. Southern; in the Middle Ages Anselm's name was strongly associated with arguments for the Immaculate Conception and the sinlessness of the Virgin (although mostly because of works wrongly attributed to him rather than his own writings, and particularly a treatise which was actually written by his English biographer Eadmer. The Immaculate Conception was in some ways a particularly Anglo-Saxon feast, celebrated in English monasteries before the Norman Conquest and subsequently suppressed for several generations; it was Eadmer's treatise and a Saxon abbot (Æthelsige) who were partly responsible for reinstating it.  You can read about it all at the Catholic Encyclopedia article.)

And so I can't help thinking of this as the 'Anselm Carol', though it really isn't at all. 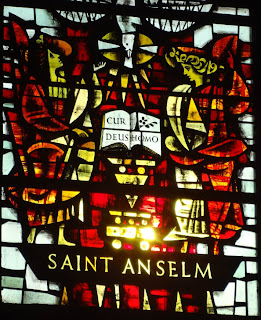 The sun shining through the glass in the chapel where Anselm is buried, Canterbury Cathedral, December 2012


This is the unmodernised version of the carol, as found in Cambridge University Library MS. Ee 1.12, via Richard Greene, The Early English Carols, no.66:

Beholde, the flease of Gedeon
Wexed wete, that no dewe fel on;
Beholde, the yerde of Aaron
Unmoysted bare a floure.

The prophete Isay seith thus:
"A mayde shall bere a childe to us
Whose name shall be called Jhesus,
Oure helpe and our socour.

"A yerde shall goo oute of Jesse rote
Wherof a floure shall ascende full soote."
This floure is Crist, oure helth and boote,
This yerde, Mary, his boure.

Seynt Mathew seith in the gospell,
"A mayde shall bere Emanuell,
That is to sey, God with us to dwell,
That lovely paramour."

This is the stone cutte of the hille,
Criste borne of Marie us untille
Without synne in thought, dede, and wille
To save us fro dolour.

This chielde shall be the Prince of Peas,
Whose kingdome shall ever encrease,
Wherof the peas shall nevir ceas
But encreace day and houre.

Seint Anselme seith, "So Criste did pas
Thurgh Marie myelde, as his wille was,
As the sonne beame goth thurgh the glas,
That mayde full of honoure."
Posted by Clerk of Oxford at 12:10 pm