A Morning Hymn: The Bird of Bliss 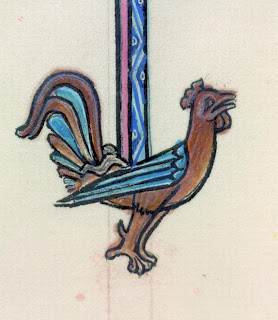 The gladsome bird, the day's messenger,
Singing with musical harmony,
Sayeth in his song the day begins to clear,
And biddeth us address ourselves and hie
Towards the life, the life that shall not die;
This is the voice right of the bird of bliss
Singing to us that the day coming is.

This biddeth this heavenly pursuivant:
That we should all from slumbering arise,
And that we should been wholly attendant
To please God devoutly with service;
Righteous and chaste and eke in sober wise, [also in a sober manner]
The light of grace is drawing to us near
Of our darkness the clouds away to clear.


This is a translation of the first two verses of a morning hymn by Prudentius, 'Ales diei nuntius'. It comes from a fifteenth-century manuscript of English hymn translations of which I have previously posted an Advent hymn, another morning hymn, and a hymn to the Holy Ghost. The whole manuscript is full of delights, and this is no exception. There are three things about this hymn which I particularly love:

1) the word 'gladsome', possibly my favourite word in the English language

2) the word 'pursuivant', a royal messenger or herald, perhaps familiar to those of you who know Malory, or his loyal Victorian imitators like William Morris; it's the language of the court and of literary romance, and thus a splendid example of a translator adapting a Latin hymn to the imaginative world of his own culture.

3) the fact that it reminds me of the wonderful Middle English proverbial phrase 'as glad as a bird when the day dawns', which I wrote about here. I almost wonder if this phrase, or at least this idea, was in the translator's mind as he worked - his happy bird with its 'musical harmony' is more suggestive of a dawn chorus than Prudentius' crowing cock. It's such a vivid simile, a striking way to express exuberant joy. I've been more than usually aware of the dawn chorus this summer; a tree near my bedroom window is a veritable choir-stall, and birdsong has seemed to be everywhere, even in the city - not only in April do 'smale foweles maken melodye, that slepen al the nyght with open ye'. In past years I've hardly taken notice of it, but what a remarkable thing it is, if you take a moment to think about it: if you were reading a novel about a fantasy world in which little winged creatures flitted around in the trees, singing and chirping, each different and with their own distinctive song, you'd think it a delightful invention. And there they are, all the time, not caring if you listen to them or not. It's one of those things for which 'we need nothing but open eyes to be ravished like the cherubims' - or open ears, in this case. 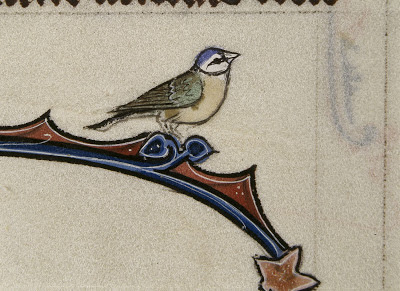 This thirteenth-century English manuscript contains several very naturalistic birds (take a look at this stork!), and I find them mesmerising. They seem to have been drawn from nature, which means that the little bird this artist saw - and heard - died seven hundred years ago; and yet here he is. Isn't he a gladsome bird indeed, a bird of bliss? I could look at this picture all day.

And here's some bird-like harmony to start the day:

Last week I was at a concert in Canterbury Cathedral which featured 'The Lark Ascending'. A young violinist was playing the solo, and as those last trilling notes died away into the darkness of the nave there was a silence of the kind where no one wants to breathe; then after a few heartbeats it was broken by the cathedral bell, high above us, tolling the hour.
Posted by Clerk of Oxford at 8:33 am

Absolutely beautiful post - the illumination of the blue tit is wonderful, and your take on 'If birds weren't real, they'd seem a delightful invention' is just lovely. And who can resist 'The Lark Ascending'? Sounds like quite an epiphany in the Cathedral.

It was - one of those unforgettable moments.

One of the saddest things I ever heard was my father, who could recognise any bird in Britain by its song, realising that he could no longer hear the skylarks. I try to appreciate birdsong particularly for his sake. How right you are about how they would appear if invented for a fantasy world!

Isn't happiness often about the sum of small pleasures like this? Yesterday my dog and I were walking and she startled a partridge, which startled a roebuck, which took off through a field of barley in which it had been hiding and looked back at us for a moment from the skyline before going down below the brow of the hill. I sometimes envy you your walks which can take you to medieval churches - but my walks provide their own unexpected moments!

Those sudden moments can be wonderful! Learning to appreciate them has made such a difference in my life. I greatly admire your father's ability to recognise birds by their songs - I can't identify *any* and would love to learn! I must commit myself to studying them, somehow.

My father learned in the 1940s from some 78 rpm records, first playing them with the list of tracks in front of him, and then testing himself by listening without the list. He was very miffed when the 33rpm replacements he bought in the 1970s spoke the name of the bird at the beginning of each track, removing the possibility of testing himself. I never had the patience to learn this way, and in spite of all my walks with him only know about a dozen of the more obvious songs. I believe there are apps available now for the technology-able among us! (not me)

That shows remarkable patience and persistence! In lieu of records, I just learned today that the BBC are currently running a series of one-minute radio programmes every day called 'Tweet of the Day', where they play the song of a bird and talk a little about it. It's a lovely idea, and hopefully it will help me learn some songs!

It is a great collection of writings that you have-Particularly I love birds so can appreciate your insightfulness upon this them. I often see their correspondence to a more pure heavenly realm. It seems that the medeivals understood this at least with some birds, while others could be connected with a darker nature and a more demonic spiritual side. It is very consoling particularly to listen to the birds at dawn or dusk when their melodies increase and to try to hear their conversation with one another. And it is true that most birds seem full of an effortless joy -- which often humans appear to have lost. This might be why the Creator had decided to create song birds to remind his fallen creatures of a more peaceful, harmonious and heavenly realm. How could one deny that their is a God if one truly contemplates the marvelous nature of birds and listens to their singing?

Also I was going to mention that besides what you mentioned, the British library has a very good collection of bird recordings and recordings of other wildlife which I discovered- which provides a wonderful tool for trying to discern the differing melodies. I can not seem to past the link here but you can easily find this by searching. There are British wildlife recordings and then there are almost seven hundred separate recordings of various birds made from Africa. l.Julianna

Thanks for that information about the British Library - I should have known they would have something useful in their archives! I will go and explore their recordings. I entirely agree with you about the consolation and spiritual power of birds and their song - 'effortless joy' is exactly the right way to characterise it, and it can be so very moving.