St Wihtburh and the Miracle on Holkham Beach

Today I'd like to introduce you to a miracle performed by St Wihtburh, an Anglo-Saxon saint who was celebrated (in the few places where she was celebrated) on 8 July. Wihtburh lived in East Anglia in the first half of the eighth century, and according to legend she was the daughter of King Anna of East Anglia and youngest sister of St Æthelthryth (Etheldreda) of Ely - although this may be only legend, since Wihtburh is not mentioned in Bede's otherwise well-informed account of Etheldreda and her family. Wihtburh's claim to sanctity was that she founded a monastery at Dereham in Norfolk, with the miraculous aid of deer who fed her workmen with milk as the monastery was being built - hence the deer in the stained-glass window above. Tradition said that she died on 17 March 743 (though this date is too late, if she really was Etheldreda's sister), and her body was later removed to Ely, where she was commemorated along with her saintly sisters. By 'removed', it would be more accurate to say 'stolen'; in fact that's what today's feast commemorates, because on 8 July 974 Abbot Byrhtnoth of Ely and a group of his monks purloined the relics of Wihtburh from Dereham despite fierce resistance from the townspeople, and spirited them away to Ely.

(This is a perfect example of what I was saying yesterday about translation feasts being hard to justify! But such pious thefts are a literary trope in translation narratives, and what this one probably tells us is that Abbot Byrhtnoth, who had led the refoundation of Ely as a Benedictine monastery, was gathering saints and relics for his community; and that he had decided to focus its interests on the saints linked to St Etheldreda, who included, besides Wihtburh, Etheldreda's sister Seaxburh, niece Eormenhild, great-niece Wærburh, and half-sisters Æthelburh and Sæthryth. The abbot's theft still seems to be rankling with whoever wrote the Wikipedia entry for Wihtburh, though; old grudges die hard in Norfolk...)

Anyway, the miracle-story I want to post today relates to Wihtburh's childhood, and is supposed to have taken place at Holkham, on the northern coast of Norfolk. It's told in a Vita S. Wihtburge composed at Ely in the early twelfth century, which is edited and translated by Rosalind Love in The Hagiography of the Female Saints of Ely (Oxford, 2004), pp.54-93 (this extract at pp.87-91):

[Wihtburh] was sent with her nurse to be brought up by the seaside, in a village on her father’s lands, called Holkham... While she was dwelling in that hamlet with her nurse and tutors, one day, as children are wont to do, she went to play with her friends on the dry parts of the sand. Although it is usual for boisterous games to be encouraged, she stood out from the crowd in her blessed innocence, was sweeter and gentler than the others, and joyfully and exultantly urged her companions to be nicer in their playing, and with a gentle manner summoning them altogether as they shouted one to another, she began to address them with sweetly coaxing voice, speaking, so I believe, in the spirit of God: ‘Let us go, my dear friends, to the nearby shore, to gather up the smaller pebbles which together with the sand are tossed out of the sea into high piles by the regular beating to and fro of the waves, because it may be that they assemble themselves together and gather themselves into a heap ready for building-work, just as if a church is to be constructed there.' When they heard this they quickly rushed up, happy and ready, eagerly they presented themselves all set for fetching and carrying. And when one by one they threw down in the middle all the pieces which they had each brought separately, however big it was, the whole heap, just as is the nature of pebbles, scattered all over the place. But that small quantity which the only virgin of the Lord, Wihtburh, brought, when she produced it, began to swell and multiply and at the same time to be reduced to one solid mass. At this her companions were turned to shock and amazement, and nodding to one another they haughtily turned to spite and envy against her, and by repeatedly kicking the mass with their heels tried to turn it back, and attempted to scatter into its former constituent parts the pile that had heaped into one and was now solidified. When she saw this she reached out her hand, made the sign of the cross, and called upon the Lord's name in the words of her own language, and by the power of the holy cross imprinted upon it, the heaped-up pile, as it had already begun to, stayed forever as if rooted and grounded. St Wihtburh did this every time her little companions gathered to play, as a true presage of future things...

[Every time this happened] they left those hardened masses there, but returning the next day found them shifted far away on to the top of a hill, in a very high place, well away from the stormy waves, placed a distance from the watery plain which is regularly made treacherous by the coming and going of the sea-tide, and this seems to offer a safe journey without fear to those who come near.


Her nurse prophesies that a church will one day be built on this miraculously-formed mound of pebbles, and her words came to pass: later a church was built there "which is called in English Withburgsstowe, where those stones are kept as a testimony to the event." The church at Holkham was (and still is) dedicated to St Wihtburh, the only church in England to bear that dedication.

Maybe it's just because I grew up by the seaside (though not in Norfolk), but I find this a particularly appealing miracle - if nothing else, a childhood miracle story in which the saint is shown actually playing like a child is an unusual and rather sweet thing to see! The whole situation is a charmingly ordinary one: a little girl on the beach with her nurse, all the children playing with the sand and pebbles (with buckets and spades, you might imagine), young Wihtburh trying to get them to play nicely (bossy little thing! but I sympathise) - and then her miracle is not much more than a giant sandcastle which turns into the site of a church! Plus, Holkham Beach is a distinctive and memorable landscape, just the kind of place which deserves a miracle-story of its own - have a look at it on Google Images. Interestingly, the church at Holkham stands on what is probably a man-made earthwork - a noticeable feature in a landscape of flat beaches - so this story about Wihtburh's miraculous mound-building was perhaps meant to explain that feature of the local environment. I wonder similarly about the miraculous 'deer' of Dereham, whether the story might have been an extrapolation from the place-name - it would have to be a late one, since in Old English deor refers to any kind of wild animal, but I think it might just about have been possible in the twelfth century, when the story is first recorded. There are similarities between Withburh's legend and that of St Mildred of Thanet, which also features deer and an aetiological explanation for a local earthwork; the two royal saints were related (somehow; I've lost track of the genealogy!) and there may have been some borrowing of motifs in one direction or the other. It was excellent work on the part of the anonymous Ely hagiographer to give Wihtburh a miracle-story which fits so well with the local landscape and with the role in which he has cast the saint - Etheldreda's baby sister.

(I'm also inclined to enjoy this story because I've recently been re-reading Charlotte Yonge's The Daisy Chain, in which it happens that the young heroine - named Etheldred - puts heart and soul into getting a church built, and thus unconsciously imitates the childhood endeavours of her namesake saint's sister. That's the kind of coincidence which amuses me...)

In later centuries the site of Wihtburh's church was to become famous for a much grander pile of stones: the palatial Holkham Hall. But the church, retaining its unique dedication though much rebuilt, still stands in the grounds of the estate, and you can read about it here. 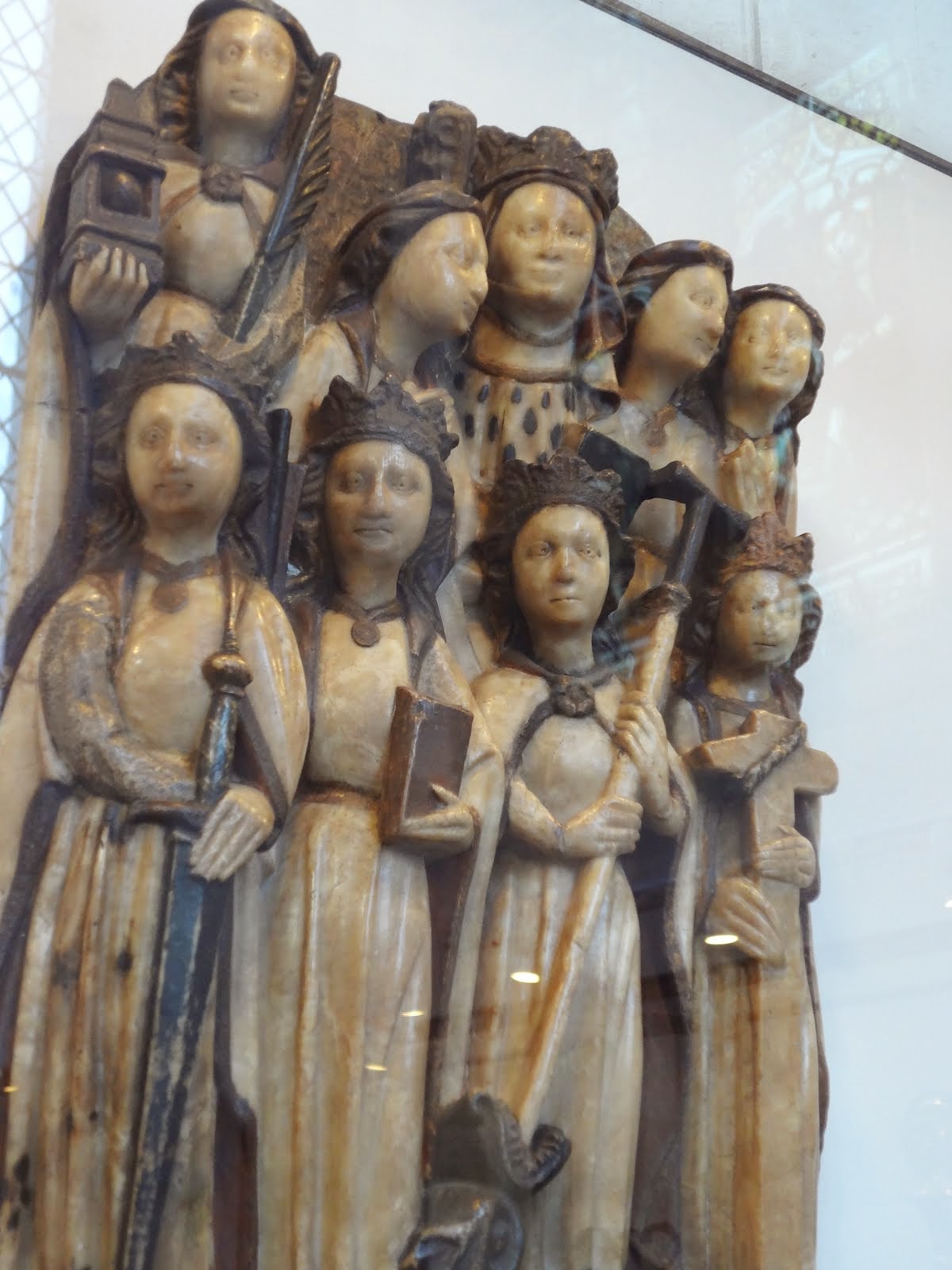 Wihtburh (second from left on the top row) and her sisters in fifteenth-century English alabaster,
on display in St Peter Mancroft, Norwich
Posted by Clerk of Oxford at 1:16 pm

Definitely time I re-read Daisy Chain. Thanks for the lovely story and timely reminder!

Another Charlotte Yonge reader! This is a rare occurrence ;) I hadn't read The Daisy Chain since my pre-medievalist days, and I was tickled to be reminded of Ethel's nickname 'Unready' - and a moment where she laughs at the idea of making a window of St Etheldreda for the church!

This also sounds a great deal like a description of the conglomerates of gravel and pebbles that you find all over the place in North Norfolk -- much of it lithified glacial material, sometimes in long clear strata, sometimes piled in heaps. There are a lot of funny lumps and bumps of glacial moraine and bits of esker and so on all along the coast there. The conglomerate is weird stuff: looks almost artificial. Can't find a good picture at the moment.

Really? That makes a lot of sense! It does seem to me like this story was written by someone with knowledge of the local landscape, which is always an interesting thing...

If one goes to East Dereham today and looks at the empty grave, one may see a spring which rose from the looted grave once the Saint's body had been taken away.

You might enjoy membership of the Charlotte Yonge Fellowship. They have a website where you can browse their journal and review, and an excellent bibliography of articles about her work. You are not alone!