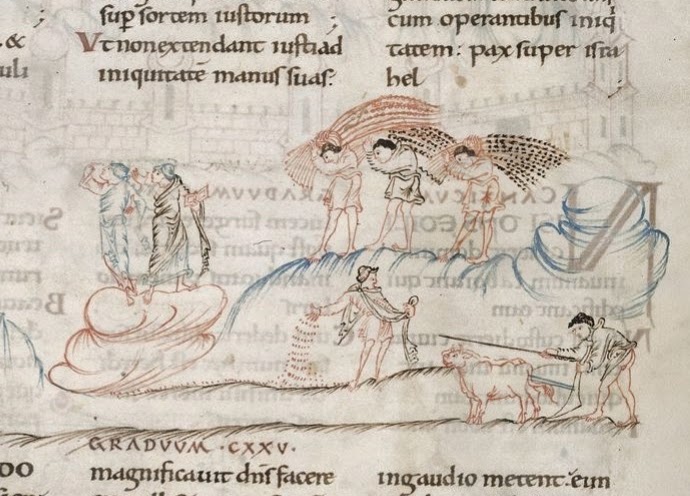 This year I've been posting at intervals extracts from the Old English poem known as the Menologium, a tenth-century poem which catalogues the months of the year, describing their characteristic seasonal features and saints' feasts. The sections for riotous May and the bright sun of June can be found in the posts A May Miscellany and 'Se lengsta dæg': The Anglo-Saxon Solstice. In this poem the month of July gets only six lines, mentioning no distinguishing events except the feast of St James; but nearly thirty lines are devoted to August, the month of Lammas and the harvest, and of several important saints' days. So let's take a look at how this poem describes the month which is called in Old English Weodmonað, 'weed-month', the month of long grasses. In Old English weed doesn't necessarily suggest an unwanted plant, only a wild and uncultivated one, so the name evokes the season's rampant growth in meadow, wood and hedgerow; and this is echoed, as we shall see, in the poem's interest in exploring growth and fruitfulness.

The text is from here (ll. 136-162); the translation is mine. For another Anglo-Saxon text about Lammas, see Latter Lammas and Second Shoots.

And after seven nights
of summer's brightness Weed-month slips
into the dwellings, everywhere August brings
to all peoples Lammas Day; so the harvest comes,
after that number of nights but one [i.e. six nights],
bright, laden with fruits. Plenty is revealed,
beautiful upon the earth. Then, after three nights,
the loyal prince went forth in martyrdom,
the glorious deacon, Lawrence; for that he now has life
with the Father of Glory, a reward for his works.
And five nights after this the fairest of maidens,
glory of women, sought the Lord of Hosts
because of kinship with her son, a victorious home
in the fields of Paradise. The Saviour repaid the virgin
for his fostering with a fair reward,
life in eternity. Ten nights after that
is always celebrated here in Britain
the feast of Bartholomew,
an excellent event. And likewise after four nights
is brought to fruition among men, far and wide,
the death of the noble one, he who long ago
sprinkled with water the Prince of Glory,
the warrior most worthily. Of him the Ruler said
that no more glorious person would be born
of man and woman in this world.

The riddling style of the Menologium makes you work hard to figure out the dates and the people referred to; even if you know what you should be looking for, you have to set your mind at it! So it's worth saying plainly that the events mentioned here are:

To begin at the beginning: the description of the harvest here is beautiful. In hlafmæssan dæg you can see another instance of the etymology of Lammas (as I said before) in the wild; the name comes from Old English hlaf, 'loaf' + mæsse, 'mass', from the custom of blessing loaves of bread made from the first corn of the harvest. Yet despite its markedly Anglo-Saxon name, the poem reminds us that the feast comes to yrmenþeodum 'all peoples, nations everywhere'. The opening of the extract describes the transition from summer to autumn (hærfest is the name of the season as well as the harvest itself): after a period of summer's brightness (sumere gebrihted), the harvest comes, wlitig, wæstmum hladen, 'bright, laden with fruits', and the earth reveals its wela - its plenty, abundance, riches. It's remarkable that centuries before William Blake praised 'Autumn, laden with fruit' and John Keats described how Autumn conspires to 'load and bless with fruit the vines that round the thatch-eves run' (in poems imaginatively titled 'To Autumn' and 'To Autumn', respectively) the Anglo-Saxon poet could write about autumn as wæstmum hladen, 'laden with fruits'. Nine hundred years of English poetry separate them, but they landed on the same word.

I think we can trace something of autumn and harvest running through the rest of the passage, too. In this poem you get at most a few lines of pen-portrait to describe each saint's feast, so it's a highly allusive and compressed style of description, packed with meaning. Every detail and every word has been carefully selected. So it struck me as interesting that in the descriptions of both St Lawrence and the Virgin there is an emphasis on the 'reward', lean, they receive for their deeds - for Lawrence's loyalty, the Virgin's 'fostering' of her divine son. There's a focus on the idea of repayment, of Christ presenting them (might one say?) with the fruits of their labours.

And we also learn that the Virgin's reward is eternal life in neorxnawange. This is one of the oddest-looking Old English words; its etymology is obscure, but it means 'Paradise', usually in reference to the Garden of Eden. The second element wange means 'fields, plains', and in Old English poetry the word seems to connote greenness and open space (see the discussion of neorxnawange in Ananya Jahanara Kabir's Paradise, Death and Doomsday in Anglo-Saxon Literature, on Google Books here). The poet has chosen the most botanical word he could find for the setting of the Virgin's harvest, her life on the fields of Paradise.

We could take this a little further: John the Baptist's death is said to be widely geypped, which means 'made known, proclaimed' but can also refer to flowering and production of fruits - a general sense of 'bringing forth' is the key idea. And the detail the poet chooses to attach to St John is not his death (the actual subject of the August feast) but the fact that he sprinkled Christ with water, mid wætere oferwearp, like some kind of saintly gardener. This might be reading a little too much into it - though I'm not actually sure it's possible to read too much into the glorious complexities of Old English poetry - but I think we can detect a general musing on ideas and images of spiritual fruitfulness, production, yield, and harvest.

As well as being Lammas Day, 1st August is also the anniversary of the death in 984 of Æthelwold, monastic reformer, educator, and influential Bishop of Winchester, under whose auspices this poem may have been composed. (Æthelwold has actually been suggested as a possible author of the Menologium.) To celebrate this pleasing coincidence, we can close by looking at how the month of August appears in another product of Æthelwold's Winchester: the Benedictional of St Æthelwold (BL Additional 49598). This manuscript of blessings, made for Æthelwold's own use, covers the cycle of the ecclesiastical year, and so here we are almost seeing how August might have looked through his eyes - how the month ahead might have been shaping up for the bishop at the beginning of August, in Winchester, around the year 980.

The blessings appointed for the feasts of August occupy ff. 101-105v of the Benedictional. This manuscript shares with the Menologium a surprising lack of interest in the month of July (St Swithun and St Benedict excepted; perhaps the monks of Winchester went on holiday in the second half of July); so after St Benedict's Day on 11 July, we resume in early August with a blessing for the feast of St Lawrence: 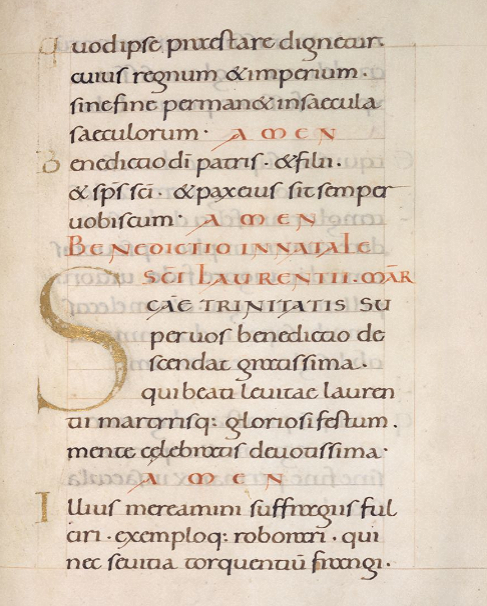 mære diacon Laurentius, the August saint who was burned on a griddle... 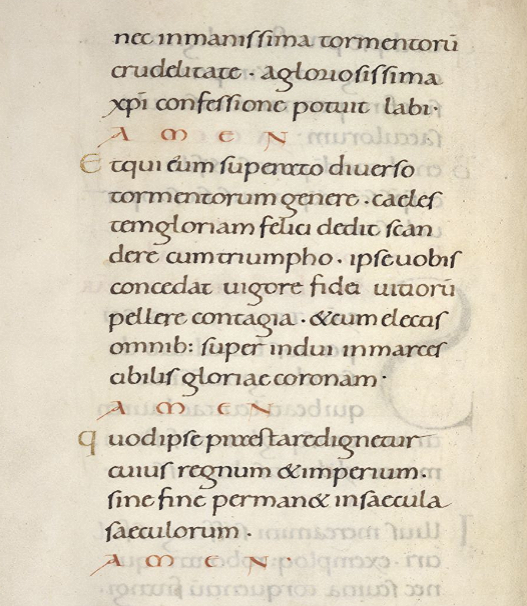 And the Dormition of the Virgin, with the apostles below and angels above: 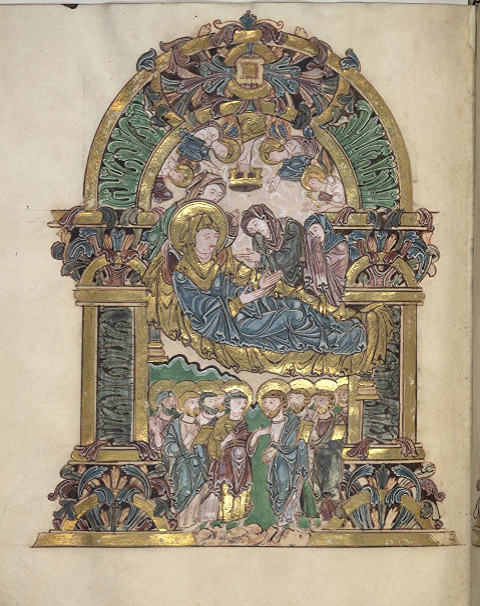 'And five nights after this the fairest of maidens, glory of women, sought the Lord of Hosts because of kinship with her son, a victorious home in the fields of Paradise. The Saviour repaid the virgin for his fostering with a glorious reward, life in eternity.' 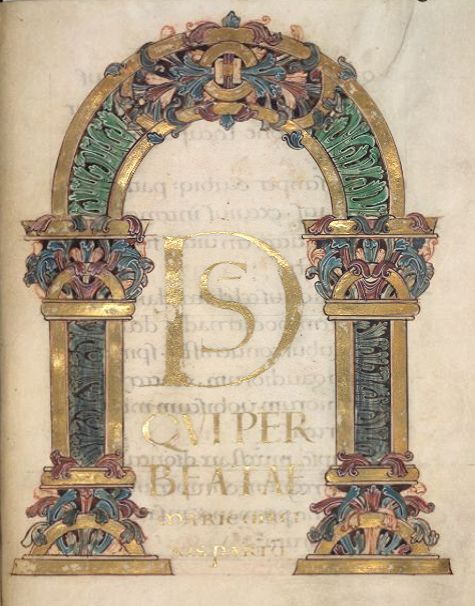 (The green foliate border seems particularly apt here, with the poem in mind!) The blessing for St Bartholomew's Day, the wyrd welþungen: 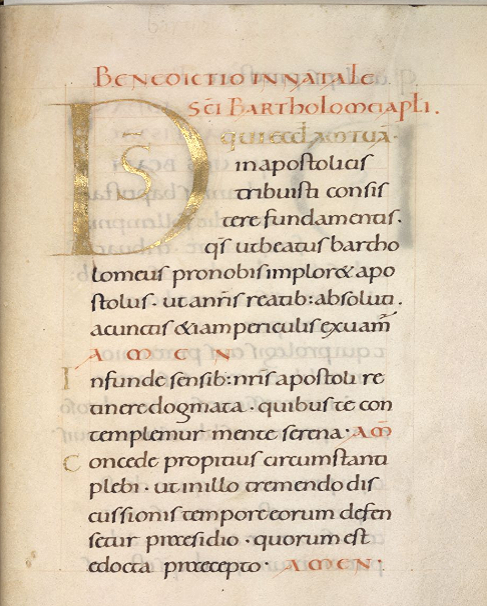 And for the Beheading of John the Baptist: 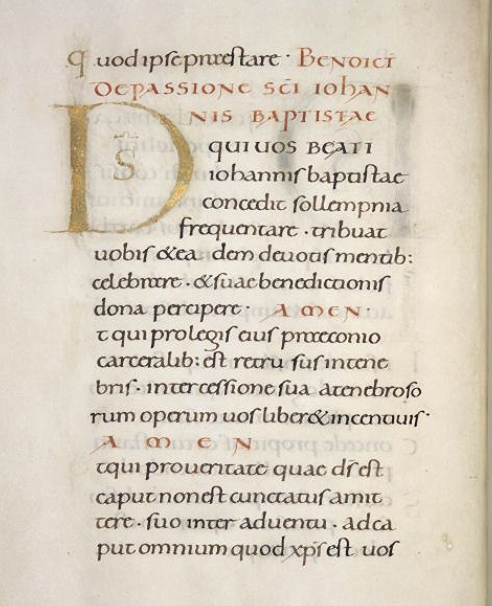 Many thanks for the "Lammas" notes, as I had been wondering if the 'La-' part included a 'Lady' reference, and if so, to what Feast!

Do you happen to know anything about the history of the commemoration of the Maccabees on 1 August as well? One can imagine their likely appeal to the Anglo-Saxons, but no evidence comes to mind.

I don't know about liturgical commemoration, but there's an Old English homily on the Maccabees: http://users.ox.ac.uk/~stuart/kings/main.htm

Thank you very much! Now that you have made me aware of its existence in this new edition, I have been able to go looking for a translation as an additional aid to approaching the text, and find, in the Internet Archive, a scan of what is catalogued there as Aelfric's Lives of saints, volume 2 (edited with translations for the EETS by Skeat, who also connects this homily, found on pages 67-125. with 1 August).

This is wonderful. Thank you!