An unusual miracle recorded in Eadmer of Canterbury's Life of St Dunstan, written in the early years of the twelfth century:

[Dunstan], while setting up his hospices at suitable intervals in his villages which were far afield from Canterbury, built a wooden church at Mayfield, just as he had in the locations of his other hospices. And while he was dedicating it and walking around it according to ritual he noticed that it was not aligned with the rising of the sun at the equinox; it is related that while passing near it he pushed it slightly with his shoulder and immediately changed it from its former orientation into direct alignment with the East where he wanted it. No one doubts that he could do this easily unless there exists someone who doubts the words of Christ our Lord in which he promises to those who have faith like a mustard seed that they can move even a mountain with their words.

The reference in this episode to the correct orientation of a church is very rare in the literature of the period, if not unique, although the archaeological record shows that Norman builders were usually concerned to obtain correct orientation, and that rebuilt Anglo-Norman churches were often aligned closer to true East-West than their predecessors.


This incident may, therefore, reflect the interests of Eadmer's time more than of Dunstan's; but it's an interesting curiosity, all the same. 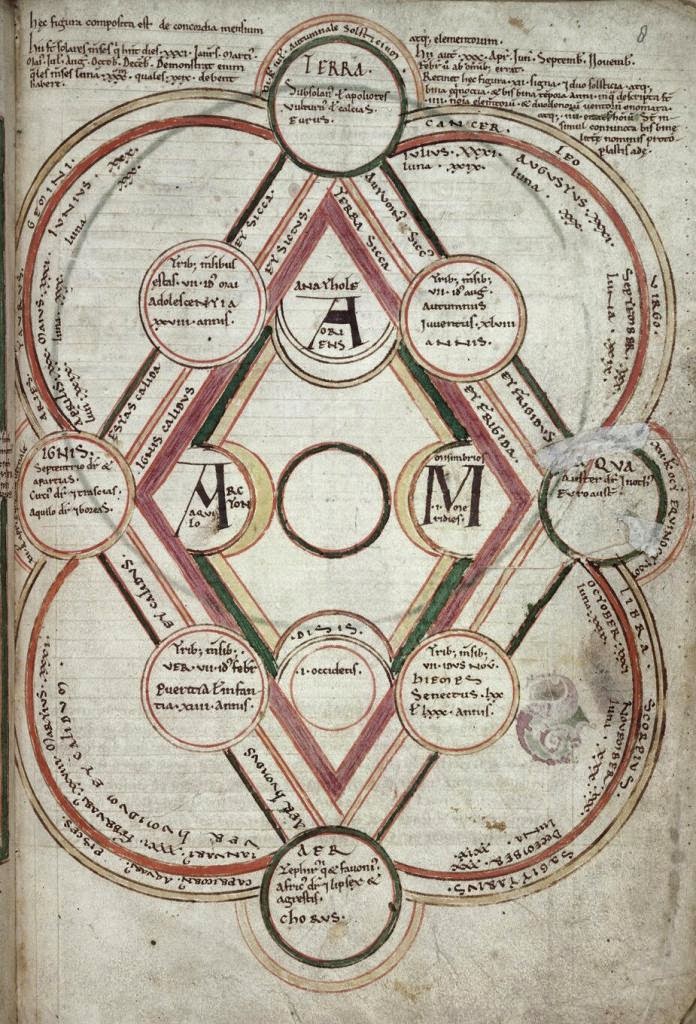 A diagram drawn in the second quarter of the twelfth century at Peterborough Abbey (BL Harley 3667, f. 8), showing the correspondences between the four seasons, months, equinoxes, solstices, astrological signs, twelve winds, and four ages of man. Like Eadmer's Life of Dunstan, this diagram shows the twelfth century looking back to the Anglo-Saxon world: the diagram was devised in c.1011 by Byrhtferth of Ramsey, perhaps the best scientist Anglo-Saxon England ever produced, in his Enchiridion.
Posted by Clerk of Oxford at 6:31 pm