A Candlemas Miracle: 'a light to lighten the English' 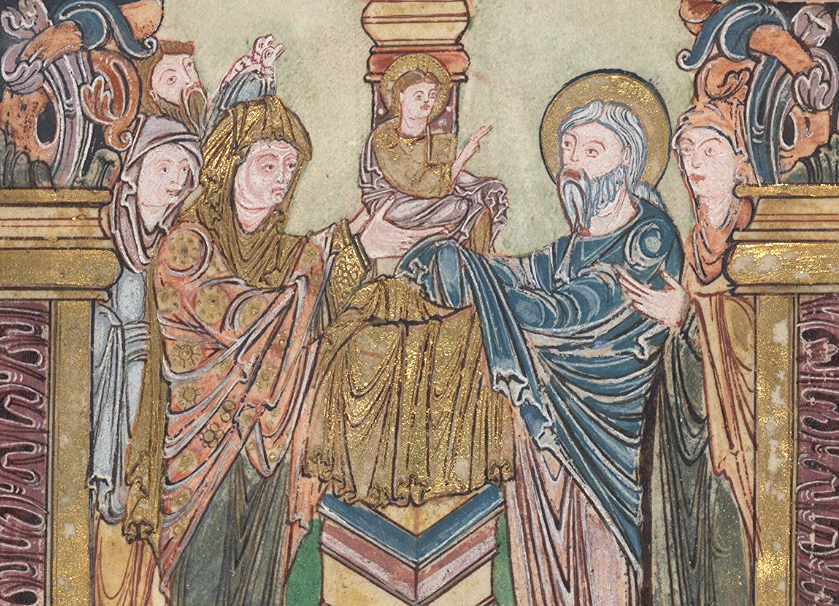 A few years ago I posted an Old English sermon for Candlemas, the Feast of the Presentation of Christ in the Temple, celebrated on February 2. In that sermon, Ælfric describes the practice of blessing candles and carrying them in procession on this day:


'Be it known also to everyone that it is appointed in the custom of the church that on this day we should carry our lights to church, and let them be blessed there: and that we should go afterwards with that light among the houses of God, and sing the hymn which is appointed for that. Though some people cannot sing, they can nevertheless bear the light in their hands; for on this day was the true Light, Christ, borne to the temple, who redeemed us from darkness and will bring us to that eternal light, who lives and rules for ever without end.'

The Benedictional of St Æthelwold, made for the Bishop of Winchester in the second half of the tenth century, contains a text for the blessing of candles (as well as the image of the Presentation at the top of this post): 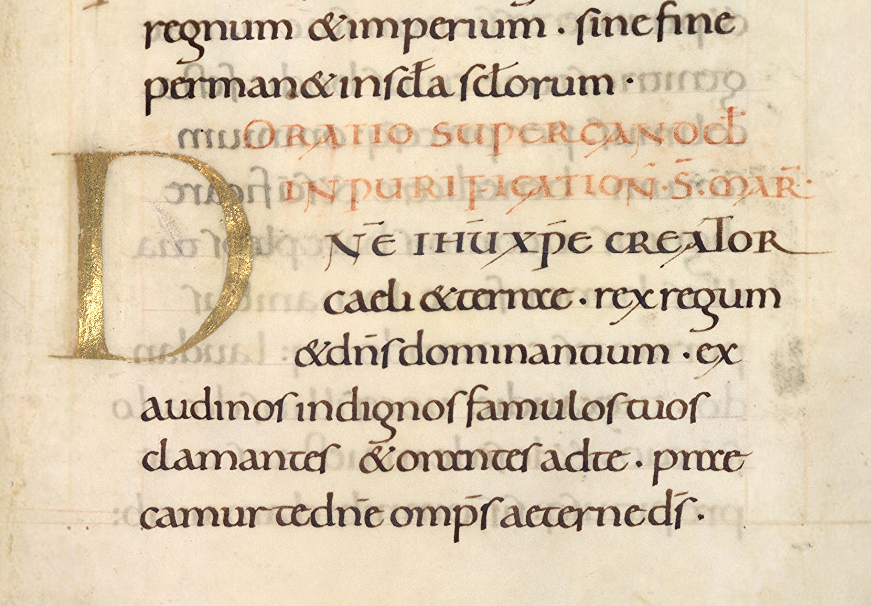 The feast, and the custom, are associated with a story told about one of Anglo-Saxon England's foremost saints - and Æthelwold's close friend - St Dunstan, whose future holiness was said to have been revealed by a prenatal miracle on Candlemas Day in Glastonbury, c.910. The miracle is first mentioned in a series of lections composed for the feast of St Dunstan between 1006 and 1012, but this is the story as told more fully by Osbern of Canterbury in the first post-Conquest Life of Dunstan (freely translated and abridged).

While Dunstan's mother was pregnant with her holy unborn child, the feast of the Purification of the blessed ever-virgin Mary shone forth. People from all the surrounding area flocked to the church dedicated to the Virgin in Glastonbury, to render the service of devotion at this great festival to Christ, the King of Kings. The boy's father Heorstan went with his wife, Cynethryth, to be present with their lighted candles at the Mass. During the service, it began to be read how the child Jesus was brought by his parents to the temple. And suddenly the glory of the Lord appeared in the temple: all the lights were extinguished, and the whole building was plunged into darkness by a thick mist. A cold fear crept through the congregation, their hair stood on end, their knees knocked together; they stood paralysed and stupefied by fear. But - so that all that the Lord intended should be made clear - suddenly a light from heaven blazed forth in the temple, and lit the candle which the pregnant woman bore in her hand. If they had marvelled at the loss of light, now they marvelled still more at its appearance!


Prenatal miracles, in which the holiness of a child is made known to its pregnant mother, are very common in hagiography, but the liturgical context of this miracle makes it particularly apt: this is a miniature Anglo-Saxon version of the presentation in the temple, a greater light kindling a less. The mother bears her child to the church, with her offering; the glory of God is revealed in the sight of the people ('in the midst of thy temple', as the Introit for Candlemas says), and the future of the holy baby is prophetically revealed. As Osbern explains:

And so we have a new John born of a new Elizabeth, we have a Jeremiah of our own time; both were declared to be holy in their mother's womb, one by God, the other by an angel of God. On the day when the Son of God was presented in the temple by his Virgin Mother, truly this child of God was carried to the temple in his mother's womb. 'A light to lighten the Gentiles, and to be the glory of Israel,' St Simeon joyfully proclaimed; and Christ, who is the true light, revealed that a light had risen to lighten the land of the English. 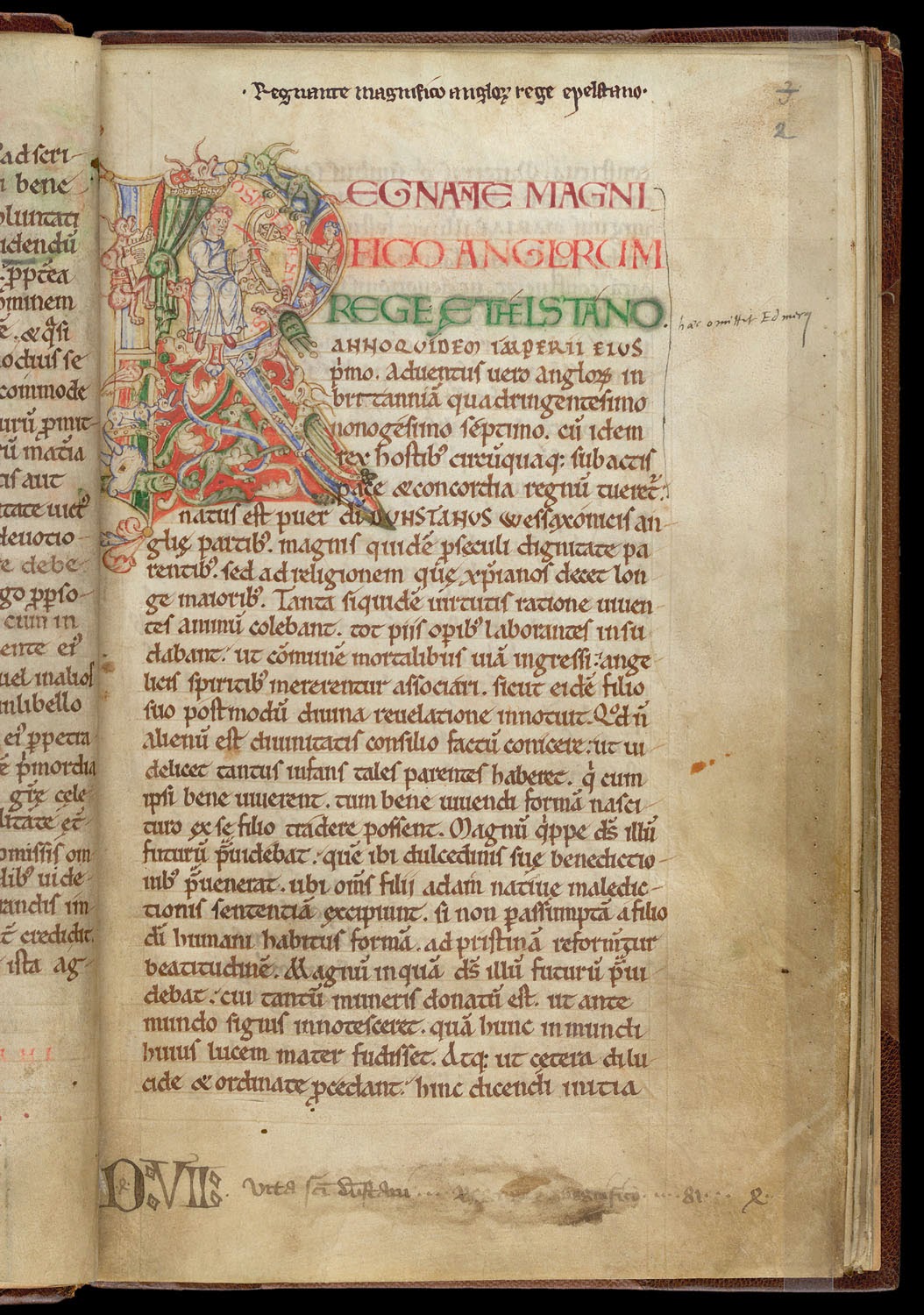 A final note on Anglo-Saxon Candlemas. This is how the Old English Menologium describes the feast:

And then after one night
we keep the feast of Mary,
mother of the King, because on that day Christ,
the Ruler's child, she brought to the temple.
Then after five nights winter is
carried out of the camps.

According to Anglo-Saxon calendars (as you may remember from this post in November), winter runs from 7 November to 6 February, which means that Candlemas coincides nicely with the beginning of spring: Mary carries Christ to the temple, and winter is carried away (afered). But more on that in a few days' time...
Posted by Clerk of Oxford at 4:11 pm