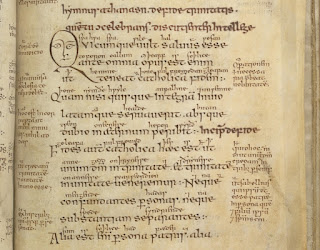 This blog has been rather introspective and sober recently, so I think it's time to post something quick and fun. As I mentioned a little while ago, I've been conducting a mini Twitter experiment in my free time: Old English Wisdom. I've been posting daily snippets of proverbs, maxims, and advice or counsel from Old English poetry and prose, with translations, and the account has now acquired more than 1200 followers (and counting). This has been great fun for me, and since an hour's skim-reading of a weekend can yield enough material to keep me going for weeks, it doesn't take up much time at all. I may never get to teach Old English again (to students, I mean - no one can stop me teaching it to 1200 strangers on the internet!) but it gives me such pleasure to have an excuse to re-read all these familiar and less-familiar texts.

It's also a pleasure to play with some ways of negotiating the challenges of this kind of project, and to think about how the brand-new medium and the centuries-old message can work together. The biggest challenge, the thing I ponder most, is the lack of context. I'm bit obsessive about context, and one of the challenges of sharing anything on the internet as I do - pictures of manuscripts, extracts from texts, etc. - is working out how to give enough information to provide a full and accurate context, without exhausting the patience of the reader with excessive detail. This is especially acute on Twitter, where you never know how far a tweet may go or who may read it. But it's a useful challenge - it helps me to prioritise, and to think myself into the position of someone who doesn't know anything about texts which are very familiar to me. One of the features of this project which first gave me pause was that the individual tweets are, by necessity, lacking in context (I attribute them with a hashtag, which links tweets from the same texts together over time, and provides context of a sort.) I've only been able to reconcile this with my over-active scholarly conscience by the thought that proverbs and maxims are, by their very nature, statements which can be decontextualised and recontextualised almost without limit. That's how proverbs work, right? You can use them wherever they feel appropriate (or humorously inappropriate). And in the case of Old English maxims, they stand out from their immediate context by certain formal and grammatical features, and we find them across the corpus reused in multiple different contexts, in each of which they function differently. So I think it's acceptable (I hope...) to take them out of their context and let them stand alone, to some extent, in a way it might not be with other types of quotation.

The other challenge is translation; Old English poetry is hard to translate at the best of times, and in the case of proverbs and maxims there are even more uncertainties. They can often be translated in multiple ways, all equally possible - I do my best, but I'd be the first to admit that any single translation, especially when confined by Twitter's character limit, is often inadequate. But I think it's worth trying, if it's a choice between that and not posting the texts at all.

Ah, but I promised you fun. Some really excellent Anglo-Saxon proverbs are just a little too long for Twitter, and so here are five amusing examples from a collection known as the 'Durham Proverbs'. This group of forty-six proverbs comes from the manuscript Durham Cathedral, MS B. III. 32, images of which you can see here. Despite the name, the manuscript was not made at Durham (it only came there in the eighteenth century) but most likely at Canterbury, and the proverbs were added around the middle of the eleventh century. The manuscript also contains this hymn to St Dunstan, among other hymns and canticles, and the proverbs it contains appear in both English and Latin versions. Several have parallels in other Old English poems, including 'The Wanderer', and some appear in later Middle English sources too.

All the Durham Proverbs are rather wonderful and many of them are distinctly puzzling, but I'll post here just the instances of one particular type of proverb: the following are all examples of 'Wellerisms'. This common type of oral saying gets its name from Dickens' Sam Weller, perhaps the most famous fictional exponent of this kind of joke; here's a nice list of Dickens' Wellerisms, from eight hundred years after the Anglo-Saxon examples. (It greatly pleases me that the Durham Proverbs should come from a Canterbury manuscript, when so much of The Pickwick Papers takes place in Kent!)

Here are the Old English Wellerisms with their Latin versions, as reconstructed in Olof Arngart, 'The Durham Proverbs', Speculum 56:2 (1981), 288-300; the translations are mine. They all make me laugh, but I'll leave it up to you to interpret their meaning...


Nunc in iudicio porci dixit maritus sedens in apro.
Nu hit ys on swines dome, cwæð se ceorl sæt on eoferes hricge.
It’s up to the pig now, said the peasant sitting on the boar’s back.

(No one understands this one. Your guess is as good as anyone's.) 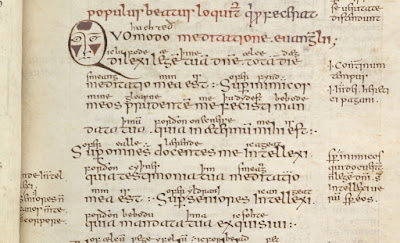 Images: two quirky little faces in a glossed Anglo-Saxon Psalter. Just because.
Posted by Clerk of Oxford at 8:12 pm

Email ThisBlogThis!Share to TwitterShare to FacebookShare to Pinterest
Labels: Anglo-Saxons

Wonderful post. I really enjoy reading your blog. Thank you for all your hard work.

I had lots of fun reading these to my 8 & 10-year old daughters and together trying to figure out what they meant! Thanks always for thoughtful, engaging posts our whole family can enjoy.

These are terrific - I love "it's up to the pig now"!
(I'll definitely have to find a way to access twitter.)

Here is my guess for Durham Proverb 15: [Neither a] statement nor [a] story [can be] forced [to be] said [by one whose] hydrocele [of the neck] [is like a] boiling cauldron [of] foul[ness].