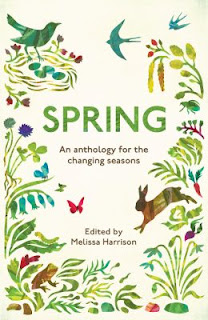 Just a quick post to advertise a beautiful new book, which contains my translation of an extract from the Old English poem The Seafarer: it's called Spring: An Anthology for the Changing Seasons, and you can read about it here. The anthology, among many exquisite pieces of writing on the season, reproduces an extract from the poem which I wrote about in this post, beginning:

The woods take on blossoms, towns become fair,
fields grow beautiful, the world hastens on;
all these things urge on the eager mind,
the spirit to the journey, in one who thinks to travel
far on the paths of the sea.
The cuckoo too gives warning with mournful voice,
summer's watchman sings, foretells sorrow,
bitter in the heart. Of this that man knows nothing,
the warrior blessed with wealth, what some endure
who furthest tread the paths of exile.
And so now my spirit roams beyond the confines of the heart,
my spirit over the sea-flood;
it wanders wide over the whale's home,
the expanse of the earth, and comes back to me
eager and greedy; the lone flier cries,
incites the heart to the whale's way, irresistible,
across the ocean's floods.

You can read the whole poem here (or, for a rather more daring translation, here's Ezra Pound's version - and listen to this!).

The Seafarer is a poem I admire more every time I read it: it's an irresistible poem, strange and beautiful in its strangeness, restless, urgent and uncompromising. Although not 'nature writing' in the sense we would understand it, it offers as complex and ambivalent an approach to the season of spring - the season as it interweaves with human experience - as any later poet could hope to create. The spring of The Seafarer is an uncomfortable, eager season, impelling movement and growth; the voice of the poem, like the cry of the cuckoo and the soaring seabird-soul, 'greedy' and never satisfied, calls to those of us - and so really to all of us - not truly at home in this world. It presses ever onwards, away from safety and comfort out onto the moving waters. In my last post I talked briefly about love and 'longing' in Anglo-Saxon poetry, but The Seafarer's most famous line of longing pushes away from, not towards, human love: A hafað longunge se þe on lagu fundað, 'He always has a longing who sets out on the sea'.

Anyway, I'm very pleased to be part of this anthology; this the first time I've ever seen any of my writing in an actual physical book, so it's pretty exciting for me! I'm especially glad that the editor chose to include some medieval poetry (Chaucer's there too), since the first six centuries of English literature are all too often overlooked in collections like this. One of my favourite things in blogging about medieval literature is introducing it to people who might not otherwise encounter it; and though The Seafarer is not the most obscure example, and is just the tip of the iceberg (an apt metaphor for such an ice-bound poem) of the wonders of Anglo-Saxon poetry, it belongs among any collection of the best writing in English. Do take a look at this book - it's a beautiful volume.
Posted by Clerk of Oxford at 2:21 pm

I would like to thank you for your many entries, and more particularly, for this one with Pound's beautiful translation of The Seafarer. You have inspired me to work my way through Sweet's Anglo-Saxon Primer.

In order to offer some recompense for the wealth which you have given me, may I suggest this lovely Mediaeval Icelandic hymn (13th Century, I believe)

Thanks for the tip - ordered. And thanks for your unending stream of fascinating posts! liz - monreal

What a beautiful poem. Thank you for rescuing it from obscurity.

I am catching up on my favorite blogs and have been so pleased to read about this anthology...shall order! Love your writing and the gifts your words offer: Thank you!

This is one of my "new" favorite sites. Can't wait to read more!

Thank you all! And thanks for the link to that beautiful Icelandic hymn, Bernard - absolutely lovely!

Congratulations on having your translation included in this charming book...a high accolade, indeed.

This is my first encounter with this poem. Intriguing depths. I must seek out the full form.