The Coming of Christ, the Golden Blossom 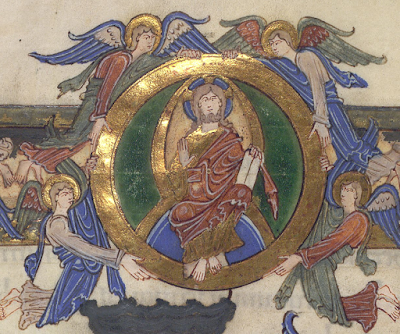 On the first Sunday of Advent, here's a fragment of an anonymous Anglo-Saxon homily on the subject of Christ's tocyme. It comes from the collection of Old English sermons known as the Blickling Homilies, which probably dates to the tenth century. The text is from here, slightly altered, with my translation.


'Dearly beloved, we have often heard tell of the noble advent of our Lord, how he began himself to intervene in this world, as patriarchs said and proclaimed, as prophets prophesied and praised, as psalmists sang and said, that he would come from the kingly throne of his glorious realm here into this world, and would take for himself all kingdoms into his own keeping. All that was fulfilled after the heavens broke open and the supreme power descended into this earth, and the Holy Spirit dwelt in the noble womb, in the best bosom, in the chosen treasure-chamber, and in that holy breast he dwelt for nine months. Then the queen of all virgins bore the true Creator, Comforter of all people, Saviour of all the world, Preserver of all spirits, Helper of all souls. Then the golden blossom came into this world, and received a human body from St Mary, the spotless virgin. Through that birth we were saved, and through that child-bearing we were redeemed; through that union we were freed from the exactions of devils, and through that advent we were honoured and enriched and endowed.

And afterwards the Lord Christ dwelt here in the world with men, and showed them many miracles which he worked in front of them. He intended lovingly to heal them and teach them mercy. They were stony-hearted and blind, so that they could not comprehend what they heard there, nor could they understand what they saw there; but then the Almighty God removed for them that wrongful veil from their hearts and shone upon them with enlightened understanding, so that they could understand and know how he descended into this world to be their helper and healer and refuge. Afterwards he opened for them the ears of compassion, and kindled faith in them, and manifested his mercy and made known his kinship to them. Before that we had been made orphans, because we were deprived of the heavenly kingdom and were put out of the original... [text missing in the manuscript] Christ lives and reigns with all holy souls, eternally without end, for ever and ever. Amen.' 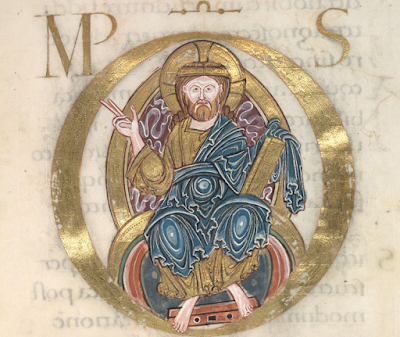 This brief fragment is full of rhetorical flourishes and ornamental prose which it's difficult to convey in translation; it would be very effective when read aloud, as homilies are of course meant to be. There's a particularly lovely string of parallel phrases describing Christ: ealles folces Frefrend, 7 ealles middangeardes Hælend, 7 ealra gasta Nergend, 7 ealra saula Helpend 'all people's Comfort, all the world's Saviour, all spirits' Preserver, all souls' Helper'.

The best-known feature of this homily is that striking description of Christ as the 'golden blossom' (goldbloma). Its meaning is uncertain: an alternative possible translation is 'golden mass', as in 'nugget of gold', to match the description of Mary's womb as the hordfæt, 'treasure-chamber'. Anglo-Saxon writers did like a treasure metaphor, and this one reminds me of the description of Christ in a similar context, in the poem Christ III, as 'the precious stone' - the 'arkenstone', as I discussed in this Advent post.

...from the beginning,
from the origin of the world, foreknowing men
with their wise wits, prophets of the Lord,
holy ones sage in spirit, spoke to men
often, not once only, of that noble child:
how the precious stone should
come into the world as refuge and comfort
to all the race of men, the ruler of glory,
beginner of bliss, through the noble woman.

The idea of Christ as a jewel is a rich and resonant one, even before you add in all the extra connotations Tolkien bestowed on the word arkenstone. But the image of a 'golden blossom' resonates too, in an Advent context: think of all those medieval texts in which Christ is described as the flower growing from the root of Jesse, which blooms in the depth of winter, when earthly leaves are withered and dying. And since this homily also describes the heavens being burst open (heofonas tohlidon) at Christ's coming, we might think particularly of the passage from Isaiah used in Advent: 'Drop down, ye heavens, from above, and let the skies pour down righteousness: let the earth open, and let them bud forth salvation, and let righteousness spring up together.'

However you choose to understand goldbloma, both translations produce interpretations full of meaning. The ancient understanding of Advent was as a season rich with interpretative possibilities: the season for reading 'the signs of the times', interpreting the natural world as if it were a book in which God had written a revelation of his purpose, and for reading Christian meaning into the prophecies and poetry of the Old Testament. Advent gives us images which are both/and, not either/or: all the many names given to Christ in this season (king, daystar, root of Jesse, key of David) are to be understood as facets of the truth, not its entirety. For a medieval reader, Advent could be knotty and paradoxical, speaking simultaneously of the beginning and the end of time, of an all-powerful but helpless baby, of the verbum infans, the speechless Word.

Today there's a lot of cultural pressure to give up on the more complex aspects of Advent, to focus on the easy bits of the Christmas story, on the principle that it's 'what people want'. I always half feel as if I ought to apologise for posting medieval texts about Advent during Advent, rather than just tweeting pretty Nativity scenes every day. That's what people want, apparently - and then they say they're tired of Christmas before the Black Friday sales have even finished. That's not surprising, if we go along with the idea that there's nothing more to Christmas than the sweet simplicity of 'Away in a Manger'. But after a year in which everyone has been anxiously and insistently reading the signs of the times, trying to decide if 2016 is 'the worst year in history' and anticipating imminent apocalypse, this seems like a particularly good moment to remember that people have asked these questions before. People have been thinking and writing about the end times for thousands of years, and over the last two thousand years they have done so particularly in December, while preparing to commemorate the coming of Christ. They have looked at the world around them, and seen so much suffering and injustice that they believed it could only be remedied by the heavens being burst open, pierced by the power of perfect love, justice, and mercy. That story has been told so many times that its details have become over-familiar, but an image like this anonymous homilist's 'golden blossom' has the ability to make it strange and new again.

Or think, perhaps, of Langland's paradoxical, mystical vision in Piers Plowman of the Incarnation as a life-giving force, which both pours down from heaven - heavy like a plant bowed down by sap, too full of love and power to be contained - and yet springs up from the earth, as light as a leaf trembling in the wind:

And also the plante of pees, moost precious of vertues:
For hevene myghte nat holden it, so was it hevy of hymself,
Til it hadde of the erthe eten his fille.
And whan it hadde of this fold flessh and blood taken,
Was nevere leef upon lynde lighter therafter,
And portatif and persaunt as the point of a nedle,
That myghte noon armure it lette ne none heighe walles.

And the plant of peace, most precious of powers:
for heaven could not hold it, it was so heavy with itself,
until it had eaten its fill of the earth,
and when it had taken flesh and blood from this ground,
there was never leaf upon a linden-tree lighter than it was,
weightless and piercing as the point of a needle,
so that no armour could stop it, nor no high walls.

Absolutely nothing to apologise for - a magnificent post. I particularly appreciated your comments on our current situation.

Thank you for such a gorgeous, timely, inspiring post. You made my heart sing this morning. - The Rev. Suzanne Guthrie, Citrus Heights, California

What a wonderful post. I love Advent - the season of expectation and hope, of looking forward to the Second Coming and back to the First. Christmas can patiently wait her turn.

Thank you for this rich post! That 'rorate' echo caught my attention as I read your translation - and you have finely brought in a Piers Ploughman echo where it had never struck me! Was it already part of Propers and elements of Offices by the Tenth century? - it sounds likely, from this echo!

St. Dunstan as metalworker springs to mind in your discussion of 'goldbloma' (and as reputed author of a treatise on alchemy! - was there Tenth-century English attention to alchemy?).

A gold blossom could be an artefact wrought of a gold nugget - or a plant mysteriously transformed: an image with dangers of evoking only Midas, but perhaps suggestive of refinement to shining and lasting perfection - of the divinization of the organic by Incarnation, baptismal incorporation, Resurrection.

By all means, do please keep giving us treasures of Advent as well as of Christmas(tide)!

What a wonderful point: you are quite right that it's the shallow and the facile that make us weary. Part of us always knows that something essential is missing from an overly simple tableau. If we really confront the "knotty and paradoxical," we may struggle, but at least we know we're not wasting our time. Anyway, thank you for cheering me up as the days darken!

Thank you for this wonderful post. Advent as you say is far too prissy and nice these days. It does good to remember how things were all those many years ago.

please never apologise for advent posts in advent, i look forward to them every year! your blog is generally one of the most spiritually nourishing resources i know