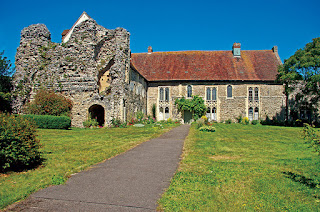 My latest column for History Today can be read online here. It's about a text very close to my heart: the Kentish Royal Legend, one of our earliest written sources for the story of St Mildred and the Anglo-Saxon history of Thanet, the island on the eastern tip of the Kent coast where I was born. I gave a talk on this text earlier this year at St Augustine's in Ramsgate, and will be speaking about it again later this week at the North Downs Way Pilgrimage Festival. Going back to it for this purpose, I was struck by the prominence it gives to the succession of saintly royal women who were descended, over several generations, from King Ethelbert and his wife Bertha. The founder of Minster-in-Thanet, Domne Eafe, is the text's (and my own) favourite, but Bertha herself, Æthelburh of Lyminge, and Eanswythe of Folkestone are all mentioned too. Here's a summary of what the Kentish Royal Legend says about Domne Eafe:

Most of all, it celebrates a woman named Domne Eafe, the founder of Minster Abbey. The text tells how Domne Eafe, the great-granddaughter of Æthelberht and Bertha, managed to obtain land for the foundation of her monastery from Ecgberht, king of Kent. Her two young brothers had been murdered by one of the king’s followers, so Ecgberht offered Domne Eafe restitution for their murder in the form of land. The Kentish Royal Legend describes how she managed to manoeuvre the king into giving her as much land as she wanted (and perhaps more than he intended) by persuading him to grant her all the lands which her pet deer could run around on the island of Thanet. She set the deer running and it followed the course of her will, marking out the ground for her abbey, which the king had to grant.

This story is, of course, not to be taken too literally, yet it is striking how the text presents Domne Eafe: it emphasises her mastery of the situation and her subtle but powerful control of both the king and the deer. In her skilful manipulation of the king, bringing good out of the evil of her brothers’ murder, she demonstrates the ability to wield what the Anglo-Saxons called ræd, the practical wisdom and good judgement which was deemed an essential quality of an effective ruler. This was apparently how the nuns of Minster Abbey chose to remember their founding mother.


This is the kind of story I love - right in the sweet spot between legend and history. This is a localised and Christianised version of a story-type which is found all over the world, in lots of different contexts to do with the apportioning of land. Folklorists categorise it as the 'Deceptive Land Purchase': someone is granted as much as land as they can plough in a day, walk round in an hour, cover with a tree, encircle with an ox-hide (that one's from the Aeneid), etc., etc. And then they get more than they were initially promised through some clever exploitation of the promise. 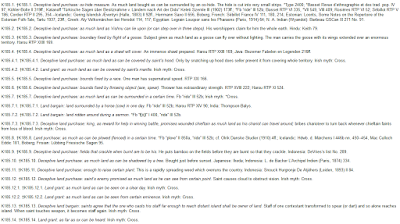 Above is a list of some examples from a reference guide to the subject - evocative, as all such lists are! Clearly Domne Eafe and her deer belong with these. Since her story involves an island, we might particularly compare, for instance, the story at the beginning of the Prose Edda about the Norse goddess Gefjon, which tells how King Gylfi of Sweden granted her as much land as she could plough in a day and night with four oxen. Gefjon produced four gigantic oxen, which were so powerful and ploughed so deep that they dragged the piece of land out to sea, and it became the island of Zealand.

Does that mean we just dismiss Domne Eafe's story as a legend - 'medieval fake news!', as some people have recently started crying when they encounter any kind of pre-modern legend, romance, or fiction? Of course not; legends are not lies, and they are absolutely not the same thing as what we have recently started calling 'fake news'. Thinking they are will lead you badly astray; here's a recent offender, where the phrase is used to describe a programme which turned out to be an object lesson in how not to analyse medieval history-writing. (That is: it set up a binary opposition between 'the truth' - provided by the magic of archaeology - and the supposed fake news of medieval romance history, which was simply cast aside as inaccurate once 'tested' against the archaeology. The concept that written sources are themselves complex objects which require specialised interpretation was nowhere to be seen; it did not seem to occur to anyone that it might be a good idea to interpret a twelfth-century source within a twelfth-century context, rather than simply reading it as an inaccurate record of events 600 years before.)

Anyway, dismissing legendary history as 'fake news' is not a particularly useful or enlightening approach. More interesting is to ask what a legend like Domne Eafe's might be able to tell us about the community which originated it, and what it reveals about their values, priorities, and concerns. This is a difficult sell for popular history, where you're often just supposed to be able to explain what really happened; but sometimes what people believe to have been the truth is just as important as what the truth actually was - especially where the truth is unrecoverable. What did Domne Eafe really do when she founded her monastery? We don't know, and we probably never will. But it matters what the Anglo-Saxon author(s) and audiences of the Kentish Royal Legend believed she did. They chose to believe this woman was the kind of person who would take on a wicked king to get justice for her brothers - quick-thinking and in control of events, she was a woman who could turn a murder into a miracle.
Posted by Clerk of Oxford at 6:36 pm

Email ThisBlogThis!Share to TwitterShare to FacebookShare to Pinterest
Labels: Anglo-Saxons